Why has my 8 month old puppy started to whine?

I have a 9 month old mastiff/pit male puppy who, for the most part, is an exceptionally well behaved pup. However, his persistent whining is getting out of hand.

He was only 7 weeks old when I got him and he had already been taken from his mother before that. He was potty trained with in a week, learned all the basic commands and is a really good dog. However, he seems to suffer from separation anxiety with me as well as developed a persistent whining in last 2 months. I'm home with him 90% of the time and give him lots of love and attention as well as tons of playtime.

I don't understand why all the whining now and I am wondering if it could be a possible later affect of being removed from mother to soon? 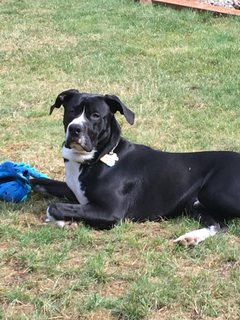 Let's go down the separation anxiety route assuming that's what it is as there's nothing else mentioned. What worked for me was distraction/diversion in the form of a kong toy with a frozen treat (wet frozen dog food in my case) whenever I would leave.

Outside of that given a basic understanding of "yes/no" verbally correcting the whining works too by saying "no" when the dog whines.

First, observe when he whines. Is it when you stop petting him? When you stop playing with him? When you are eating? When his favorite toy is not available? In the case of my dog, it was sexual frustration. He designated an object as his "humping toy" and whined when we took it away.

When you found the cause, you absolutely have to stop giving in. I've heard of several dogs constantly whining to be pet. The owners always gave in because they couldn't stand the noise for more than a minute. This only reinforces the unwanted behavior. Use ear plugs if you have to, but don't give in or it will get only worse.

As a side note: The dog has lived with you for several months now, but developed his unwanted behavior only 2 months ago. This behavior is not caused by separation from his mother. Something in the way you interact with him caused it. You should probably consult a dog trainer or read some books to correct his behavior before it becomes worse and maybe even compulsive.

Not the answer you're looking for? Browse other questions tagged dogs behavior psychology vocalizations junior-pets or ask your own question.

6
New Dog won't return when he has someone else's ball
9
Is it OK to crate my new dog at night while my old dog roams the house?
9
Dog has started to fear its own shadow
3
Horrible Dog that I Love
9
My 12 week old puppy has had two focal seizures already. Should I return him to the breeder?
3
Why does my dog poop in the house when he's alone?
2
Puppy not paying attention when excited
3
Recently adopted 4 month old pomeranian puppy, I am concerned about his behavior
1
Dog lunges at other dogs
1
Over excited border collie