New Dog won't return when he has someone else's ball

My mother has a new King Charles Spaniel that she has had from a puppy for about 4 months now. He's house trained and has been attending dog training classes and learned basic commands like wait, sit and so on. He preforms pretty well at these.

He's a very lively and active puppy dog and always wants to go over and see new people or things.

The problem is when taking him for a walk. If he finds someone else's ball he will charge off it with and refuse to come back close enough to grab him. He will also not swap it for a treat or his own ball.

We did try leaving his lead on, but not held, so it could be stepped on to stop him. He is now learning to stay the distance of the lead away!

Can anyone suggest anything? My mother is 62 years old and has been frustrated for long periods of time trying to get the dog to finish his walk in these circumstances.

I fully understand how frustrating that can be; in particular when you want to finish the walk and the dog doesn't want to get close to you. My guy has the habit of stealing shoes and I quickly realised that many people leave shoes outside!

However the good news is: it is not abnormal and it is a simple training problem.

So the first step is: stop reinforcing the habit. When you want to play with him, if he doesn't give you the ball after a short while, just ignore him and leave. Don't run after him, don't talk, etc. Don't tell him how frustrated you are, that will just make him more excited.

Then you have to train him to bring back and give the ball. He's still a puppy so you can benefit from his natural curiosity and desire to play.

I don't want to go into the details of dog training using positive reinforcement in this answer, but I'll link to other answers and resources below.

The most important point is to realise that the training has to be done before the "bad" behaviour occurs. You don't train him when you walk him. You train him in the house, then in the garden, then at the park, and only after all that you'll perfect the training in real life situations.

What I would do is

Here you have a video of a 6-weeks old puppy that already learned that. 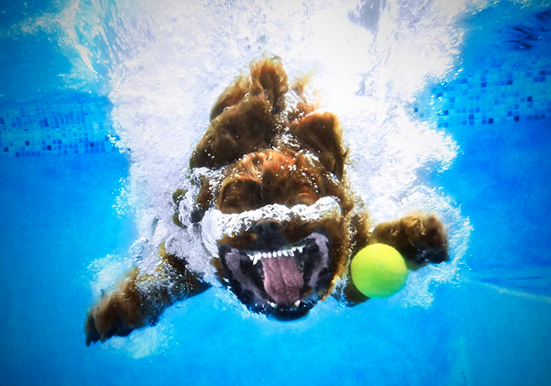 9
How to properly train a dog to come when I call him?
6
How do I stop my dog from jumping on me?

2
My dog bites me when I hold her collar
3
My dog won't eat his kibble unless I'm sitting right there?
3
How can I encourage a high energy dog to exercize if it has no prey drive?
4
Puppy great in public but bad in puppy class
1
Dog lunges at other dogs
2
How do I gain my dog's trust back after accidentally stepping on him?
4
Puppy goes in tantrum when leaving for a walk
1
Dog won't walk unless the whole house walks with him