For two kittens in the apartment, how important is gender?

I have a male kitten—1.5 month old Maine Coon, who has been living with us for a week or so—and there is possibility to have another one, not necessary the same breed, for their own good and our fun. The cats would live indoors, in a two-room flat. Maybe occasionally have some free or semi-free time in a summer cottage.

What gender should another kitten be, if we're to take one? Right now, we're considering neutering our kitten when he's old enough for that, but I would invite answers for both neutered and natural cases.

Important note, it is not for purposeful breeding, but for a peaceful and fun lifetime.

I'd like to know enough of this issue to post a good definitive answer, but all I've heard of is that any combination can be successful and that mixed gender pairs generally work out better than same gender pairs. Then again, individual personalities can vary more than the average of gender.

Beyond that the advices seem controversial about whether male-male pairs are better than female-female pairs. Some sources say this and others say that, and no source claims to know it for sure proven fact. If I had to pick my choice of preferable same-gender cats I would take two males, but I have no explanation. Really I would rather take a mixed gender pair, and that's what I've already adviced before; whenever anyone has cared to ask.

In this article they say: "...in cases of same-sex pairs, two males were slightly more likely to be compatible than two females."

And in this article they say: "...two female cats will pair up better than two males, whose instincts may prompt aggression."

In my thinking there is difference in the male-male pairs whether those males are neutered or not. This article says the same: "In general, male cats are more accepting of either another male or a female. Of course, we are talking about spayed/neutered cats - which is what your cats should be in any case - you don't want those hormones raging, for a multitude of reasons! Female cats may have difficulty getting along with each other - just really depends on the individual." (bolding by me)

And to blur things up a bit more; also the breed of them has a small effect on the success of a pair of cats. However, your present cat is a "gentle giant" Maine-coon and they should be quite accepting to any cat companion. 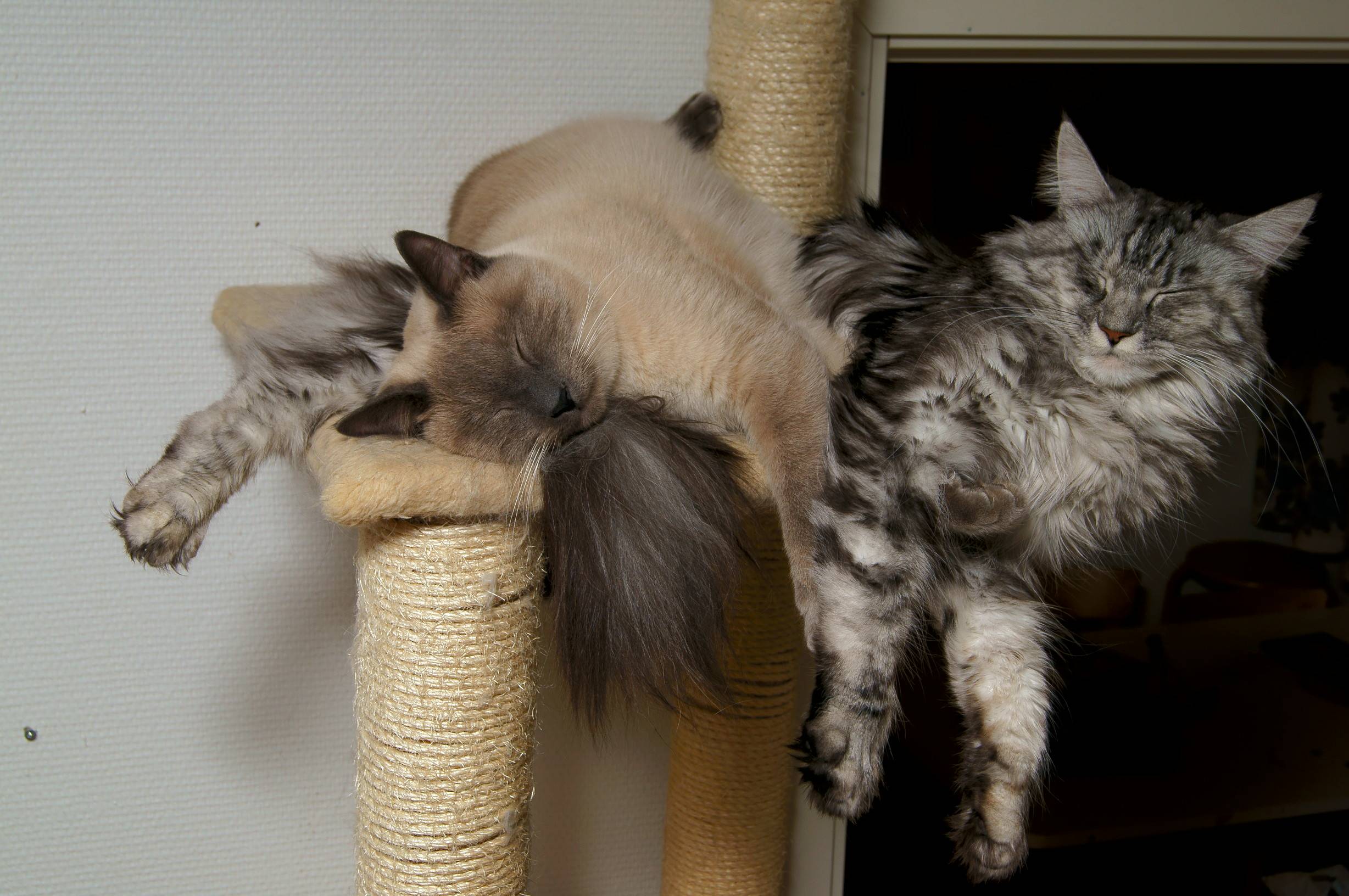 The brown cat is a mixed-breed male. He likes to sleep with the Maine coon female, and not only "with" but on and across her, and she doesn't seem to mind.

Not the answer you're looking for? Browse other questions tagged cats pet-selection or ask your own question.

13
At what age cats should stop biting and scratching games?

7
How do you determine the gender of a kitten?
3
Kitten is regressing with use of litter box?
6
Leaving two siblings kittens alone for 2 nights
4
Cultural and inter-cat problems with adopting two kittens
4
Two kittens won't get along
5
Could these two of three kittens be premature?
4
My female cat has suddenly become irritable and aggressive, particularly against her daughter
2
Moving with a cat for a short distance