How do you determine the gender of a kitten?

I was looking at a litter of kittens, and it looks like they are all girls. Is that possible? How can I tell for sure what gender the kittens are?

It's a bit tricky to tell male from female when kittens are young. It's very easy to tell when they're born, but they quickly grow more fur and it gets trickier. As they get older, the testes get larger and it gets easier to tell. At 6 weeks old it's very subtle but possibly visible. At 12 weeks old it's a small, but reasonably obvious, bulge. At 8 months old (nearly fully adult) it's blatantly obvious. Between 1 day and 10-12 weeks old it's tricky)

I believe it's possible for a litter to be all females, but it's pretty unlikely.

When they get their first vet visit, the vet will typically identify the gender as part of the routine examination. That's the surest way to know, since vets are very experienced with kitten gender identification.

If you have a litter, it's going to be a bit easier, since you'll most likely have both genders to look at.

If any of the kittens are calico (have both orange and black coloring; with or without any white), you can safely assume they are female. Calico requires two X chromosomes, so it's extremely rare for a male to be calico and when it does happen they're usually sterile (and often have other problems).

If a kitten is orange it's somewhat more likely to be a male; for a female cat to be orange (or orange and white), its father must be orange. This isn't as reliable unless you're totally certain who the father is.

Always wait until the mother cat is comfortable with you handling her kittens before you handle them. Be gentle and patient. Give the kitten back to the mother if the kitten starts acting distressed and try again later. It might be easier with two people, since one can pet and distract the kitten while the other examines it.

Put the kitten in a position that will allow you to took at its rear. Lift up the tail and look at the rear end. You might try giving the kitten a gentle scratch just above its tail to encourage it to lift its tail on its own.

There will be two openings: rectal and genital. The rectal opening is right under the tail and the genital opening is the one further from the tail. You may need to move the fur out of the way to be sure you're looking at the openings and not just a line in the fur.

With a girl kitten the two openings will be close together and the genital opening will be a small slit. The distance is likely not much greater than the width of the fur-less area around the rectal opening. There's usually only a thin band of fur in between.

With a boy kitten the distance will be a greater (maybe 1cm or half an inch, depending on kitten age/size), the opening will be a small dot or circle. The furry area in between will be twice the distance (or more) than the width of the fur-less area around the rectal opening.

On a boy kitten, the region between the rectal and genital openings, closer to the genital opening is where the scrotum and testicles are located. On a kitten that's at least 2-3 weeks old, if you gently squeeze from the sides above the genital opening, you may be able to feel sort of small pea-shaped bits under the skin. 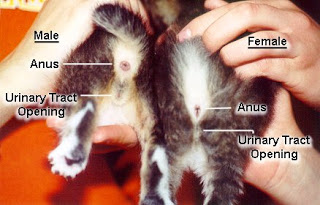 When the testes develop it is easy to tell but this isn't the case at first.

The female has two openings back there and it is a distinctive pattern. So in the beginning it is best to look for the female pattern- if you don't see it the cat is a male.

google "determining the sex of a kitten" and you'll see pictures and videos that can guide you.

Not the answer you're looking for? Browse other questions tagged cats gender-differentiation or ask your own question.