What are the pink spots on my African dwarf frogs?

I have two african dwarf frogs, and one of them has pink spots under both of its arms. I have been trying to figure out what they are, and I just can't figure it out. Does anyone possibly know what they could be, and could they harm my frogs?

The first thing I would do is put the frog into a quarantine tank so that it doesn't affect your other frog or fish.

My first thought was that it was possibly a reaction to an ammonia spike, sometimes called an ammonia burn it can be caused by something as simple as changing the filter, but if you've recently tested your water and it's fine then that might not be the case.

It's hard for me to say what exactly it could be without seeing it, but hopefully with descriptions of the most probable causes you can decide for yourself based on the symptoms.

The first thing you want to look for to see if it's a parasite infection is if the frog is acting as if it's being drained of energy. Since parasites will deprive the host of nutrients, the frog will become more lethargic over time as it's not getting the nutrients it needs. Eventually it will stop eating when it doesn't have enough energy.

With external parasites you should be able to see them if you look closely enough, you'll see what looks like a tiny leech or mite attached. Internal parasites are harder to spot, but sometimes they do show as lumps in the skin.

Note: Avoid keeping snails and frogs together, as snails can carry parasites that can infect frogs.

Bacterial infections can be just as tricky to spot as internal parasites. The symptoms you're going to have to look out for are signs of stress, skin lesions (red skin), and cloudy eyes.

Fungal infections are typically fuzzy white spots on the skin. As they grow, you'll notice rings of the fungus with raw skin in the center.

If you're still unsure what it is, I would treat for a bacterial infection first. The treatment for a bacterial infection should clear it up in about 3 days, unless it's a very severe infection (which this doesn't sound like since you're not seeing any abscesses). A good treatment for this would be Mardel Maracyn Two, as it's safe to use with fish in the tank if you can't quarantine the frog.

Then I would treat for a fungus infection, in the off-chance that it's an uncommon fungus that isn't white. The treatment would be similar to the bacterial infection but with Mardel Maroxy.

If the spots are still there after those treatments, I would move to a treatment for parasites. Specifically, the treatment for mites, which is half of a Tetracycline pill diluted in the water.

You'll probably want to have a quarantine tank for this treatment, as it will create a film at the top of the water. Or you could perform "dip" treatments by filling a small container with water and the medicine, and putting the frog in that container for an 30-60 minutes and then placing it back into the normal tank. Of course that's not ideal as it can be stressful.

If none of these treatments work, I would recommend seeing a vet. It's possible that it's a parasite that can't be treated easily, or an infection that needs to be treated with an injection.

It will not harm your frog. It just simply means your frog is a male. It is not know what these spots (which are actually glands) are used for though. 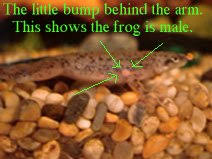 Not the answer you're looking for? Browse other questions tagged health frogs amphibians or ask your own question.

6
What kind of diet do Vietnamese Mossy Frogs need?
4
What are the ideal starting fish populations for this 20-gallon long aquarium?
4
How much vertical space to keep african dwarf frogs from jumping out?
10
Why did my African Dwarf Frog repeatedly bang his head against the wall?
4
Do the skin scales developing on my dead kitten provide any clues to what may have caused its death?
9
What are the potential risks (to the dog) from having a child ride it like a pony?
3
ADF and Mystery Snail Emergency Tank Transfer
0
My new hamster is inactive