Is this protectiveness a sign of feeling threatened/afraid, or is this video just normal/cute?

I saw this video recently in which a golden retriever was trying to prevent a human from taking or touching its puppy. Some are saying this is normal and cute (wagging tail and such), while others say this is actually very abnormal and a sign that the dog is threatened, likely because this is the last puppy in the litter that may be taken away by humans.

I don't really know dogs, but I don't want to share videos like this if what they're showing is threat or harm to animals. So I was wondering, which one of these is more likely to be accurate?

I can't be sure from the short clips, but to me this looks like a combination of trained behavior and stress.

Right at the beginning, she moves her whole body to the side and tries to pull her puppy with her. This is avoidance and can be a sign of stress.

Then something distracts her for a second and the owner grabs the puppy. Notice how she repeatedly licks her lips when she notices (sticking the tongue out just a tiny bit). That is also a sign of stress.

The way she holds her puppy between her paws is either protective or possesive. She controls where the puppy goes (nowhere) and who takes her puppy away (noone). It doesn't look like she feels threatened or abused, but a little stressed. If she was afraid that the owner would hurt her puppy, she would have given clear warning signs by now.

Her owner tells her to give her paw, which she does without hesitation. That's another clue that she's treated and trained well and trusts her owners.

This is clearly trained behavior. Her owner said something and she performed the corresponding trick. But again, there is stress involved here.

I noticed that she licked the front of her lips and averted her eyes in that instant. That's the same sign of stress we saw in the first scene.

Look closely at her mouth when she licks her lips and when she pants. She draws the corner of her mouth back into something resembling a smile. This is another indicator of stress that is often misunderstood by humans. 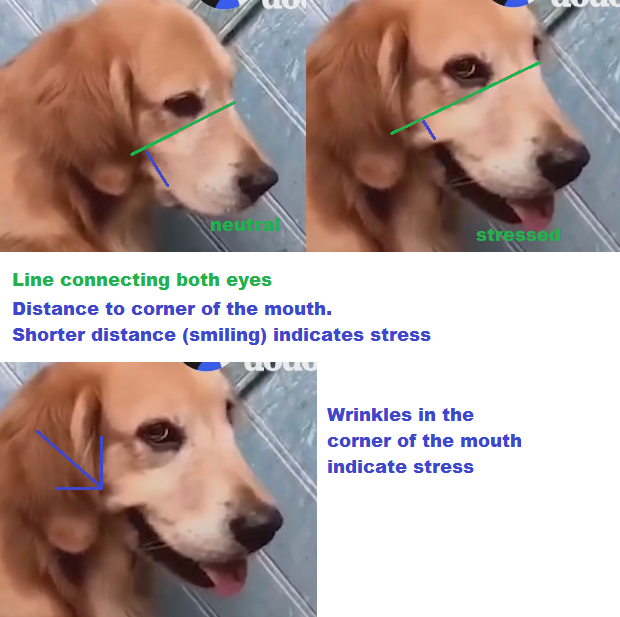 Right at the end of the video she more or less jups away from the door. It's impossible to interpret because the video is overlayed and ends right then, but it's a rather sure sign that she doesn't feel threatened. It could be another iteration of avoidance (stressed), but she surely wouldn't leave her puppy when she felt threatened.

0
Dog shows me his teeth when I enter the room

10
Possible sign of dog-to-dog aggression in a 3 dog household
1
Is my Siberian Husky's size normal
2
Dog pees inside if back door shut with no sign
0
New puppy - is this normal behaviour
2
Why was a worm exam negative when actual worm was included in stool sample?
3
Why does my dog love her furry toys?
3
Is this kind of puppy's stool normal?