Teaching cat to use feeding 'toy'

We just bought a new feeding toy for our two cats (4 and 5 years old).
Picture below of the product. 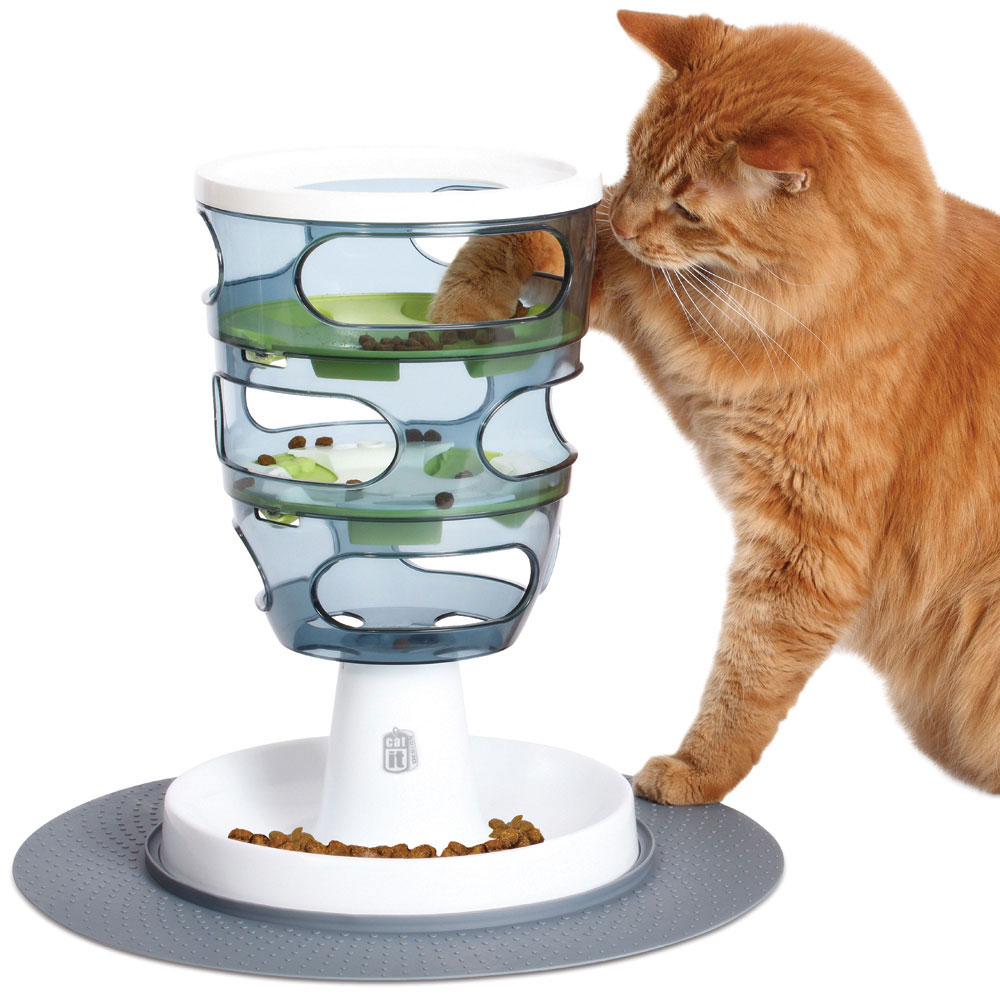 Now we thought that our cats could use some entertainment, since they are house cats and never get to go outside.
We figured that this would be something they would instantly enjoy because let's face it, what cat doesn't like to 'steal' food from the table when you aren't looking.
Unfortunately we were wrong.

Both cats don't seem to understand the concept, we removed their regular bowl of cats grains (I used google translate for that, I don't know if thats correct). But they both just sit there and look at the thing and at us, then they ignore it and start their ritual of asking for food.
When we show them that the grains fall down, it's like they don't understand it.
We even take their paws and put them in the holes so they can feel the grains, but few cats like being held by their paws and this also isn't a success.

Can anyone suggest anything that could help stimulate the cats to use this food dispenser?

cats eating toys
Share
Improve this question
edited May 23 '20 at 0:01

You might do better putting a favorite treat in this rather than their regular food, and by starting with the lid off so they get the idea of food inside, and then by loading it at the one-action level and moving upward only after they've figured that out... but this is also going to depend on the cat.

Mine have two toys that involve reaching inside things. One is a sliding-door-holds-treat puzzle, which they're both interested in but only one has figured out how to operate. (And she does so with a gesture which shows that she doesn't fully understand it, she just knows that rubbing in a particular direction generally works.) The other is a ball-in-a-track toy which has the opposite bias; Harry has figured our roughy how to play with it (though it doesn't hold him for very long, perhaps because there's no built-in bribe) but Hazel gives it only occasional attention. It's hard to predict how much complexity, and what kind, a cat will like until you've lived with it for years and seen what works and what doesn't.

And it depends on the cat's mood. Mine are fascinated when I'm using a sink, so I got them one of the cat fountains. They showed absolutely no interest in it -- maybe because I wasn't playing with it? -- and I put it aside. Tried it again this year, and while they still don't play with it as they do with a sink it has become their preferred water dish.

If they were easy to predict, or thought the way we do, they wouldn't be cats...

Not the answer you're looking for? Browse other questions tagged cats eating toys or ask your own question.

14
Cats and string: will a toy make this better or worse?
12
How can I re-teach my cats to eat insects?
21
Is there benefit to feeding my cats cat food that incorporates fruits and vegetables?
4
Cats eat each other's food (and dog's food), makes it hard to keep track of when they eat
28
Why does my cat bring me her toy?
3
Advise On Feeding My Sensitive Cat
4
catnip in cat food
6
Cat Toy(s) For Energetic Cat
8
Dog running away with toy
3
Free feeding to scheduled feeding