How can I prevent my cat from chewing up the carpet?

My cat loves to bite and pull at the carpet everywhere there is a seam (between rooms, patches, etc). I've tried squirting him with water, but now he just runs away if I even move while he's doing it. Since I can't be there all the time, I need some way to keep him from ripping up the carpet while I'm at work or asleep. I've seen products that are supposed to keep cats away from an area, but that would require spaying the doorway. I don't want to prevent him from entering those rooms, just to stop messing with the carpet.

Some cats are horizontal scratchers instead of vertical ones, they like pulling and yanking at carpet and stuff rather than, say, a couch or something, if they don't have something appropriate. You can get scratchers that are just corrugated cardboard stuck together in flatter box shapes that you set on the floor - I had a cat who was determined to yank up all my carpets, and then I gave him something like this, and he stopped trying to pull my carpet up, and chewed and scratched on the cardboard thing instead.

If it isn't a scratching need, then you might want to try putting pepper (cayenne or black pepper, I have used both) in the area you want to keep him out of, like along the seams. I do this to keep my cat out of plants and other places, and it works pretty well. Also lemon juice or vinegar also work, although make sure they won't damage your carpet.

You could also get a small rug and try to train him to only pull at that one, but I have never really gotten it to work (although other people apparently have.)

There are commercial sprays you can use, that claim to keep cats from scratching at things, but I can't speak to how well they work.

It also might be a boredom thing, or an attention seeking behaviour, and he might just want more active playtime, and there are a large variety of toys and things you can get to help with this.

Also, I found some cats responds better to a noise deterrent than being sprayed with water - for one cat I had, I used a can/jar with rocks in it and shook it right near him when he was doing stuff I didn't like, and it worked well.

There are products that you can stick on a surface (including carpet) to prevent scratching there. I've seen them in the "sticky" variety (like double-sided sticky tape) and the smooth variety. Either way, your cat is likely to find a different place to destroy and you'll be playing a never-ending catch-up game.

Another option is the rug/carpet item that the cat is allowed to destroy - it should look, feel, and smell different than your regular carpet.

The fact that your cat is biting and pulling the carpet with his teeth suggests that he's bored and looking for something to play with: (reference) http://en.allexperts.com/q/Cat-Training-Behavior-3489/cat-behavior-4.htm Providing him with more toys, especially chewable or destroyable toys will probably help here, as will you playing with him. If he spends a lot of time alone (which happens when the cat's human works) you could consider getting another cat - I've personally found that it's easier to add a kitten to a household than an adult cat, and that a new cat of the opposite sex will be better tolerated than one of the same sex, particularly if the current cat is used to being the only cat.

I'd suggest starting with toys that he can destroy without problems. I've also had success with the toys that have balls in tracks that the cat can bat around.

Cats nails keep growing and they have the need to scratch to shorten them and keep them dulled down. If they don't get to go outside or don't have something to scratch they will do it to the carpet. I would recommend a scratching post of some sort for your cat to use. If they have that they should not do it to the carpet. To attract your cat to the post you can use fresh or dried cat nip on the post. You can even use a log if it will stand up. My research for this answer comes from many years of cat ownership. Hope this helps your carpet and your cat.

I have had really good results using carPET Scratch Stoppers in doorways and under doors. My cats still scratch at other places on occasion (which I hope to stop), but it at least prevents the bald spots by my doors from getting any worse. 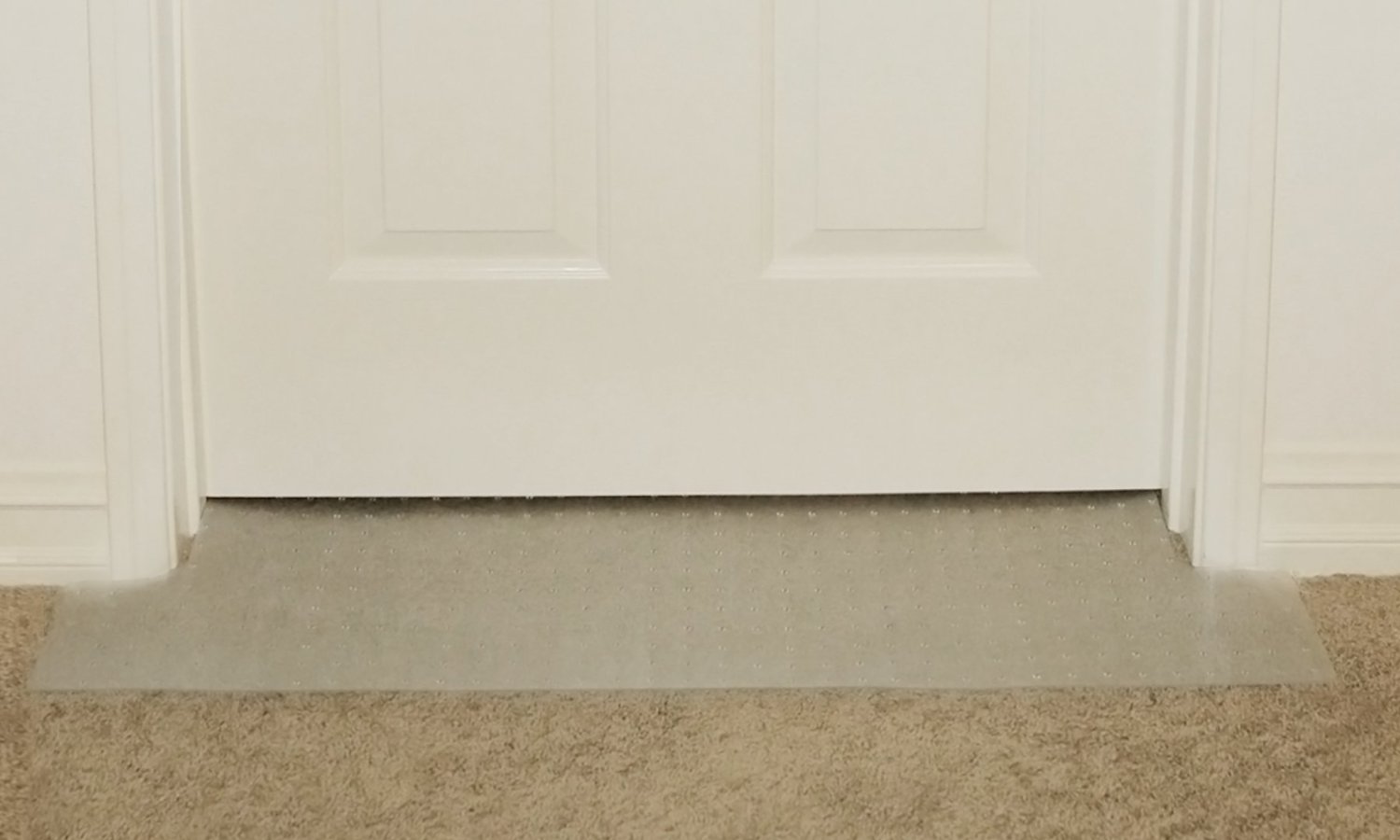 I have seven cats that are rescues over time. We have lots of issues with the carpets. We replaced the carpet in front of the doors with hardwood because the cats want out. Which you don't allow. And anytime my husband lays down to take a nap we noticed the cats digging at them in an attempt to get into the room with him. So now we leave every door open, including the basement, and they no longer try to scratch or bite at the carpet.

I've taught them a sound when they are doing something wrong and it makes them stop right away. I make a "psst" type sound. The first few times I had to sort of run at them but now I make that sound loudly and all seven will leave the room.

I do agree that adding a friend is a good option. Your older cat will be a little mean at first, and the kitten will too. But give them a few weeks and they will start sleeping and playing together.

We have two cats with two separate instances of this behavior. One can licks at the fringe of the (fake) oriental carpet. For her we sprinkled white pepper along the fringe and tried not to track it around for a few days. She was repelled for a while, but every now and then we have to repeat it.

The other cat pulls at the edges of the berber carpet on the stairs, and yanks out the vertical threads, which is thin, strong fiber like floss. He won't let us brush his teeth and we wonder if he is 'flossing' with this stuff. But we don't want him to ingest it, so our stairs are lined with duct tape (argh). Big warning for cat owners, avoid looped or berber type rug or carpet.

I've never seen or heard of Carpet Scratch Stoppers but after many failed attempts to stop my cat from getting into the computer room (with all those cords) I did come up with a solution. I bought the clear carpet runners for steps. Use it upside down with the little pricks showing (just doen't step on that in stocking feet) or even the correct way. You can cut to fit. It worked for me.

I think the cat is just trying to exhibit natural behaviors. When a cat kills a bird, for instance, he hunts it down, kills it, then begins to lick at the feathers and pull them off with his teeth. It kind of sounds like that's what you're cat is doing. Just like you provide him something to scratch on, he may need this kind of stimulation as well.

Considering he may swallow a small portion of what he's tearing up, not many things are safe. You'll have to look around and maybe find something that he can do this with. I imagine that the cat toys that have feathers on them are safe-ish, since the manufacturer has to know they'll come off. Maybe you can make him a toy. Possibly a tennis ball that you've attached Velcro to and 1" x 4" (30 x 120 cm) canvas strips with a small patch of Velcro. He could rip these off and they'd be too tough for him to chew up and too large to swallow. I say a tennis ball, but for all it matters, you could take a square of wood, sand the corners and edges over and just put straight strips of Velcro on it to attach the strips to. You could drill a hole in the top and use a string to drag it along and entice him.

Whatever you decide, I think it's a good idea to provide a substitute, just like with a dog. When a dog chews something bad, you say, "no" and then provide something suitable to chew. If you catch him chewing the carpet, grab a toy and try to entice him to put that effort into it instead.

No one has mentioned the rind of citrus fruit. I'm a lemon in water person so I take the half rind, put it in a custard dish and place it where I don't want the cat to go. Looks a little strange and you have to explain to others why you have bowls of lemon rind around. But it works. Maybe essense of lemon rubbed on a dish would work?

I have placed, in every room, those 2 by 11/2 foot (61 by 46 cm) rug samples that carpeting companies give you. My past cat loved them. My present cats use the carpeted post of a carpeted window high cat box.

goldengraingoldengrain
9922 bronze badges
Add a comment  |
-2
Want to improve this post? Provide detailed answers to this question, including citations and an explanation of why your answer is correct. Answers without enough detail may be edited or deleted.

Cover the entrance to the doorway with a old carpet and use a staple guns to secure it. I had the same problem and it is solved.

user2481user2481
7
1
Add a comment  |
Highly active question. Earn 10 reputation (not counting the association bonus) in order to answer this question. The reputation requirement helps protect this question from spam and non-answer activity.

Not the answer you're looking for? Browse other questions tagged behavior cats eating or ask your own question.

24
How can we prevent our cats from scratching on our chair?

11
How can I prevent my ferrets from chewing on wires?
16
How can I keep my cat from being scared any time he sees or hears a person?
8
How can I reduce my cat's crankiness at mealtime?
1
Older female cat and male kitten, playful => bad reaction
2
Using positive reinforcement to stop labrador from constantly sniffing the ground
4
How do I make a cat understand something is wrong?
2
How to stop my cat from scavenging, eating carpet, placemat, cord, etc
2
Why does my cat prefer eating on the carpet?
3
My second cat doesn't know how to play with my other cat and thinks that she's being attacked