So, I'm going off to college next year and my mom is at work for the majority of the day. Because of this, we got our dog (she's 3 years old) a new friend to keep her company.

We brought home this new puppy (she's almost 3 months old) and my older dog seems to be a little bit frightened by her which is understandable since my older dog has hardly been around other dogs so she's also more of a human lover than a dog lover. Our puppy is used being around more dogs compared to humans so she's always trying to play with my older dog. I, myself, haven't been around many dogs and never more than one at once for a long period of time.

When they play, they seem to play rough but I looked everything up and they don't seem to be fighting, just playing. Because my puppy is a Jack Russell terrier mix, it does a lot of biting. I've read that breed has a tendency to bite which explains why she does so often. Because she doesn't have the majority of her teeth in yet, I'm not so concerned about her biting hurting my dog, but I'm concerned if it's malicious biting or not.

My older dog doesn't bite as often, and when she does you can hardly even feel it. But my younger puppy bites my dog's neck, ears and sometimes tail. My dog doesn't seem too distressed about this, but I don't want it to continue in the future in case it is malicious biting because she may actually injure my dog when she has a full set of teeth.

The younger pup will probably initiate play most of the time. They do this by being obnoxious by our standards: they lick or bite the older dog on the cheek (often), neck, body, tail, or whatever is a good target, then jump back to see if the older dog takes the bait, and repeat until bored or successful.

Dog playing involves a lot of mouthing, some communicative growling (more barks and low throaty growls), but a lot of bowing (the dogs will take turns getting down on their elbows) and roughhousing (rolling around, mouths wide open. The older dog, when she's had enough, will usually change her tone and posture, ignoring the pup and might mouth the pup's neck if he doesn't pick up the cue. If this doesn't discourage the puppy, she may threaten to bite it with a growl and an ugly snarl. Let her do this; she has to be the dominant dog here. If the puppy doesn't back down here, call her away her from the scene.

In the first picture, the larger white dog is in the classic position inviting the other to play. The submissive posture the dominant dog is looking for in the puppy when she's fed up looks like the second picture. 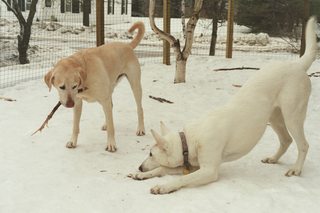 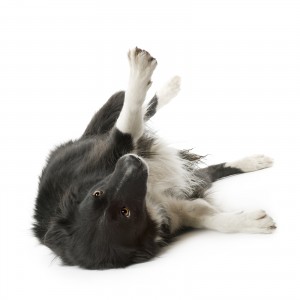 Even if the dogs aren't socialized the same way, their instincts will usually guide them.

15
How can you tell if neck biting between dogs is too rough?
6
My dog is becoming unusually hyper. Whining, won't hold still, and jumping/nipping at me
3
My staff attacked my jack russell
4
How to punish an aggressive misbehaving puppy?
4
My kittens keep fighting?
3
Why does my dog have aggressive bursts?
4
My dog, Jack Russell, is jealous of others showing me affection
1
Is my older dog going to hurt my puppy?