How can I stop my dog from peeing on our neighbor's door?

My dog in general is well behaved and only pees outdoors... Except in one case where the dog will pee if another dog had once peed there.

Because of this, about once every two months, when we go out to walk, my dog will pee on my neighbors door inside out appartment complex because long ago a dog came in and peed there. (Turns out the friend of someone else in the building brings another dog in once every two months....) And yes, my dog is leashed, and I keep the leash as short as possible while going up the stairs.

The hallway and door are tiled . How can I get rid of the scent or retrain the dog that this spot is not allowed to be peed on?

Below is a picture of the door being peed on. Its on the top right of the stairs.

I read on one website that if I put food or dog treats on the spot, it will prevent the dog from peeing there because dogs won't mark where their food is? Would that actually work? How could I implement that in this situation? 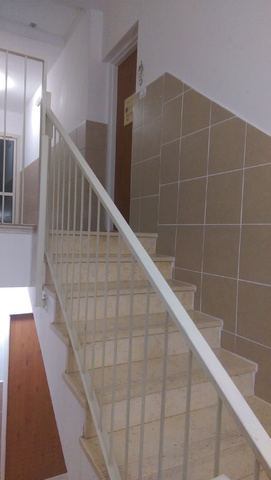 If you want to clean it, they sell cleaners meant to rid a peed on spot of all scent so as not to trigger another occurrence through instinct. You can probably find them in most pet stores and some supermarkets.

I wouldn't bother though. I don't think he can smell the spot from the side walk. I think it's a behavior and he thinks its about time to remark. The solution is pretty simple from my point of view. You dog needs to be on a leash until he comes when called every time.

I'm sure you feel like your dog is well trained and that this might be the only exception, but the truth is that if he doesn't come everytime you call him, he's not trained well enough to be off leash.

That's not something I'm just throwing out there. I have a jack Russell and it took almost two years before I could fully trust her off leash. Even when she listened well to me, she could still focus in on a squirrel, rabbit, etc... and I just don't think she could hear me in that focused state of mind. It took a long time. I had to run her down several times. I finally got her to where I'd trust her recall in almost any situation, but I still put a leash on if I feel like it's appropriate, like when I go to the vet.

So just leash your dog, give him the opportunity to misbehave and correct it when it happens. In the mean time, start working on his recall and give him a reason to return. Many people have an emergency recall, where the dogs gets an awesome treat, like a hot dog. I saw a person one time who had a freeze command, which I wish my dog knew. I've been in a situation before where a road was between me and the dog. A car was coming and most peoples safety rope is being able to a call the dog to them. However, doing this would have pulled her out into danger. If I could have told her to "freeze" she would have been much safer.

I agree with keeping the dog on a leash. Since you already know what's coming when you reach near your neighbor's door, you should steer your dog away from where he likes to pee.

100% effective prevention should be obtainable by putting a diaper on your dog before walking past the area. There are multiple source for 'dog diapers' in pet supply stores and online.

This related question may also offer insight How can I eliminate set-in dog urine scent from a carpet? on cleaning.

12
How can I eliminate set-in dog urine scent from a carpet?

10
My dog is destroying things and peeing inside when I am at work. How can I get him to stop?
2
how can I get my puppy to transition from potty pad to outside
3
My dog urinates as soon as she leaves the apartment
3
My 7-month-old puppy is peeing in the home constantly
2
Dog peeing inside when I'm not looking
2
Female dog keeps peeing inside at night
3
How to teach my 2 year old dog to use a potty patch?
4
How to stop dog from entering the kitchen?