My wife and I adopted a wonderful 5 year old female Pitbull about a year ago. Shortly after we got her she started licking her paws, not just normal cleaning of the paws but repetitive licking until the pads are all bloody and she cannot walk on them without limping. I clean and bandage them and she leaves them alone, lets them heal and does it again. To be clear, it isn't just one paw, it's all of them. 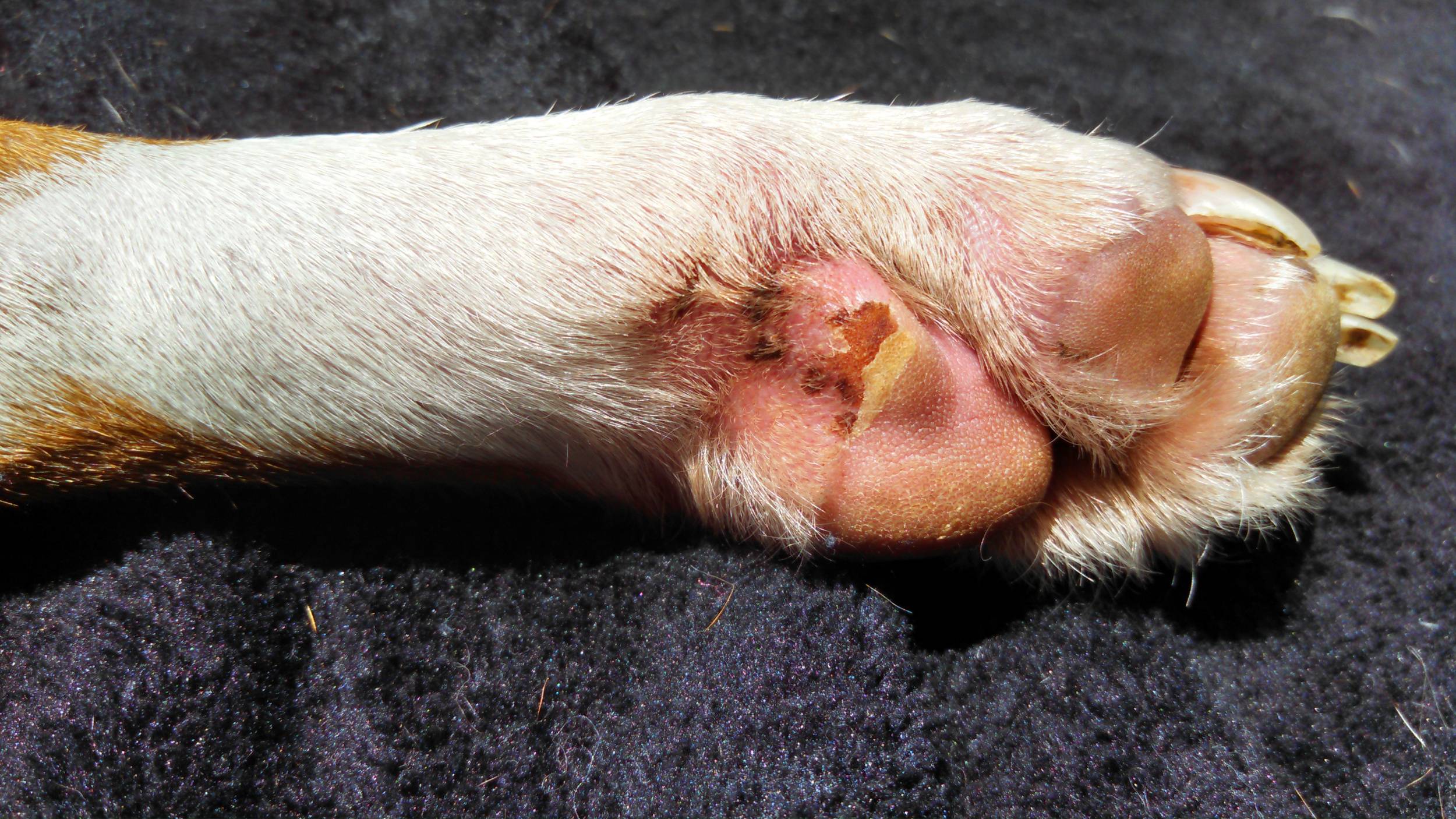 I contacted the dogs previous owner and asked her if she had ever experienced anything like this, she said no, and of course I just have to take her word for it...

The dog has been to the vet numerous times, even to different vets.

The first vet said she had food allergies and suggested putting her on a grain free food.

The second vet said she had skin and food allergies and suggested adding Claratin, she also said the dog had a yeast infection in her paws and put her on steroids for 60 days.

I've changed her food to a grain free salmon recipe, put her on the claratin, gave her the steroids and she still won't stop licking.

So my questions are this, what else could be causing the licking? Is there anything I can to stop this destructive behavior?

It is really good that you have taken her to the vet to try to rule out a medical issue. It could be an allergy and unfortunately, skin allergies can have many causes. It could also be a nervous or anxious reaction. Some dogs, when nervous or anxious can self inflict harm onto themselves, such as biting, licking excessively or scratching themselves. There could be many reasons for this behaviour from separation anxiety to you dog being born with anxiety (studies have shown that 1 out of every 5 dogs born will have some form of anxiety). Dogs who self inflict harm may do so as it helps to keep them calm, sort of like when people get nervous rubbing their hands together or tapping their feet.

A good place to start to see if this is a behavioural issue, is to keep track of when and where she is doing it. Is it just after you leave, is it after an encounter with someone or something unfamiliar, is it when she meets another dog she doesn't know? If you do go down the course of obtaining help from a behavioural specialist, please only use one that uses positive reinforcement and no form of punishment. Make sure to check their credentials, not that they simply have grown up around dogs all their life so therefore they know how to train a dog. You wouldn't go to a person, claiming to be a doctor, simply because he grew up around sick people his whole life.

A joint approach with a vet and a behaviourist (not necessarily a dog trainer as anyone can call themselves a "trainer"), will provide the best outcome for your lovely girl.

My dog has the same problem. He is a 9 year old wire fox terrier and he just likes to lick himself to pass the time. He doesn't have anxiety issues, he's a very calm, relaxed dog but he likes to always be licking on something. If it's not his paws, and there's nothing else around, he'll lick the bedspread! Anyway, our dog's paws got to be worse than your dog's and even though he's had a round of anti-fungal medicines he's still not healed. You see, he recently licked them so badly the outer layer of his toe pads started detaching. So, the vet isn't exactly sure what's going on, and we never did rule out demodex mange mites, so that's a possibility. In any case, the prescription antibiotic and anti-fungals didn't really help. So I've been treating him with natural home remedies -- borax baths and also epsom salt foot soaks. His feet are about 30% better after three weeks of this. As to the licking impulse, we have somewhat broken him of that habit just by telling him "no" when he starts up. I should add something important -- we ordered a basket style muzzle for our dog from the internet and we have it on him at night, and also when we leave the house. This is a must!! We also have tape under the bottom of the mask, so he can't get his tongue out down there and lick himself (he was sneakily doing that). Anyway, I hope this helps. I'd love to know how your dog is doing. I know this is a tough problem and can get very expensive!

I'd also like to add that it's possible the dog is allergic to grass. Mine was. Or he was allergic to something in the apartment sprinklers or stuff they put on the grass. Grain-free food helped, but didn't solve it. The next thing I tried was, after he'd go outside to potty, I'd wash his feet in a warm water with baking soda mixture, then dry them as much as possible. That helped a lot, but he'd still lick his paws until they were dried off. I then started putting booties on him before he'd go outside. Now that did the trick for me. After that, no licking feet. Granted, I agree this could be behavioral.

Your question implies that your dog will leave a bandages alone when placed on her injured feet, and the wounds heal.

There are dog boots/booties that available all over the web putting these on and leaving them on 24/7 (probably get a few pair and change/wash daily) should eliminate the issue. When her feet are completely healed, try taking them off in a controlled manor.

The boots should prevent further cases of the foot problem, taking them off in a controlled way will limit her exposure to environments and allow you to identify if there is a specific irritant.

Related Question what is a good moisturizer for a dog's pads?

it is very unlikely that allergy can cause paw hair to uproot. My dog currently has some very similar symptoms and its most likely a paw fungus, try washing her paws in vinegar and use some chlorhexidine body wash for the paws when she's not feeling pain.

2
Dogs constant paw licking
1
My miniature poodle pulling hair out of his right paw.
6
What is a good moisturizer for a dog's pads?
4
My dog can't stop licking his paws

9
What could cause my dog to bite/pull her own hair out?
6
How do I get my puppy to eat from her bowl instead of handfeeding?
4
My dog can't stop licking his paws
4
Can you use Monistat on a dogs paw for yeast infection?
3
My 12 year old cat is very sick
1
Why does my cat like licking tape so much?
4
Weirdness of both hind legs of a cat
5
Devastated and Lost Due to My Cat Not Wanting to Eat
11
What could be causing my dog to constantly lick her paws?