What is the best way to keep a cat in a multi-cat home from eating all the food?

I currently have three cats, one 1.5 year old and two ~6 month old kittens, all of which we got at the same time. As soon as we got the cats home, the older cat started eating the food from both bowls, hers and the kittens', causing her to gain a lot of weight. I feel bad for the kittens because they may not be getting all the food they need. However, I can't put more food out, and I don't want to lock them up specifically for feeding.

Is there a good way to keep the older cat out of the kitten food and keep her from eating 1.5x her recommended daily serving?

One way that might work while there's a significant size difference is to place the kitten's food in a location that the larger / older cat can't physically get into. If you're a DIY type person you might be able to come up with something elaborate but a simple and cheap way that comes to mind is to use a document storage box such as the following: 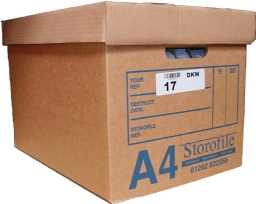 You could cut a hole in the bottom using a box cutter until the kittens can just fit in while the older cat can't and keep enlarging a little as they grow older. The lid on most of these boxes are fairly tight-fitting and I doubt a cat would be able to remove them, but if that or it getting pushed around turns out to be an issue they are robust enough to cope with quite a bit of weight, so you could place a few bricks or similar heavy object on top to prevent it.

The tops are easy enough to remove for food replenishment and they're sufficiently cheap to replace from time to time if they get dirty or you could use a liner. As an added bonus kittens seems to like to get themselves into the smallest possible area so they'll probably enjoy their own little "getaway".

we had a similar problem with our cats - in our case, our second cat, the younger (and more active) was eating both shares, while our first cat, the older and more timid, was being scared off.

What we did was separate them while feeding. I don't mean putting their food bowls in separate rooms, that may not be a sustainable solution since you'll have to keep them in one room out of the other constantly. A different solution would be to hang around during feeding time and play wall for a bit to teach them manners.

When we put down the bowls in the evening, one is put down off to one side (second cat runs and eats) and the other put down a few steps away to the other side, since cat-two is distracted with her own bowl so the other has to be left alone, at least until she's finished, and it's far enough away first cat won't be intimidated into not approaching to eat. And, whoever feeds them can usually spare a few minutes to stand between them about the time cat two is finishing up, and herd her away, scolding or distracting, to keep her from running off cat one till she's done.

It isn't perfect, especially least at first (made worse since our cat two is a much faster eater) but cat one was getting a bit before being scared off, at least, and we had other measures (dry food out constantly, the issues were with meals of canned food) we weren't worried she'd starve. And over time, we had to do less and less herding as boss cat (aka human-in-charge) made it clear that one bowl was for each, so that second cat could go after leftovers - after first cat was done, not chase her off - and first cat was assured we wouldn't let her be chased off, so it was safe to claim her share.

Coupled with the fact we wouldn't put the bowls down till both were present, second cat got manners, eventually - as an example, recently, there was a problem with one bowl (wrong color or something, she would not eat from it) but she still waited till the other cat finished before snagging the rest, because she knew the bowl on that side was not hers.

In our case, we had dry food out all the time (they self-regulated once it's clear it could be relied upon) and one meal of canned food per day, so we could stand between for just a few minutes during the one meal without too much trouble - they could visit dry food at separate times, so that wasn't an issue. If you're doing only planned meals, or this is an issue with bowls normally left out, this may be a bit more time-intensive than it was for us - but maybe do precisely planned mealtimes for a while, don't set down the bowls till everyone's there so they eat at the same time, and you can get at least a bit of teaching done each time - and it's less irritating planning to teach them manners, than being distracted from whatever else you happen to be doing when misbehavior occurs.

As a side note, you might try giving your older cat somewhat larger meals - she may be stealing the kittens' food simply because she's still hungry, and if she just has a larger metabolism than the serving size accounts for, her recommended serving may not be enough. Second cat ate a lot, way more than first cat even at the same age (and cat-one was quite active when younger), but she also runs around a heck of a lot and generally has way more energy than cat-one, so the food was burned off. And at year-and-a-half, ours was still filling out her frame, so that may also cause increased eating to support growth (cat-equivalent of teenagers, always hungry).

I admit just hunger isn't always the problem, our first-cat would eat a whole can of food if we set it out in the beginning, even if she was so full afterwards her breathing whistled - which seems less about hunger than greed. But that was about 'treat' food, the canned food she got rarely, not the dry that was her daily fare - like I said, when they're sure food will be there when they need it, they only eat till they're full. Once canned food became a daily meal, she calmed down about it and became better about not overeating because she knew there would be more, and by now she often leaves leftovers for cat-two to finish.

Not the answer you're looking for? Browse other questions tagged feeding multi-pet-families cats or ask your own question.

7
Adult vs Kitten vs All Stages cat food

14
How many times a day should I feed a cat?
9
How can I teach my kitten not to steal the other kitten's food?
3
What can I do to keep my cat from running away during the day?
10
How can I combat food anxiety in an ex-stray cat?
3
How do I help my older cat maintain weight?
2
What to do about our two male cats?
5
Should I consider switching an older (around 10 years) cat and maybe soon-to-be-7-years cats to “senior” food, what are the benefits?
7
Adult vs Kitten vs All Stages cat food
1
9 month old cat gaining weight, switch to adult food?