Leopard gecko sick with shed on arms and very thin

Sister's friend left me her two geckos to babysit while she went on a trip with my sister and said that one is sick.

She is very, very thin to the point where you can see her ribcage/lungs, and they perk up over most of her body.

She has shed stuck to both of her front legs, and they look unrepairable; they just look like tiny nubs, and when she moves, she drags herself. Her front arms look like they're broken but she can still use them to crawl. She puts them at very uncomfortable looking angles and I don't know how to help her out. This morning I had to help her by peeling shed off of her back feet, and she had very loose, bad diarrhea in the warm water. I rinsed it off of her.

She's also in a tank with another leopard gecko [unsure of the gender] who is completely healthy and eating well. Before she got sick, both geckos eat a diet of mealworms/calcium powder + 2 crickets every other day.The girl refuses to eat anything, and I had to mush up some waxworms, calcium powder, and water [for her to easily swallow] and even then I had to put it on her nose so she could lick it off.

She had a very hard time swallowing 1/4 of a waxworm, and sat for probably 5 minutes trying to get it down. She looks very sleepy.

They have three hides; two warm and one moist. She peed in the moist hide, but since this morning, she still hasn't pooped.

They have the standard humidity/temperatures they need, and a heatlamp. I really dont want this gecko to die. :/ Any kind of help would be appreciated. We can't take her to the vet because we're broke so this is the best I can do.

Here's a picture of her: 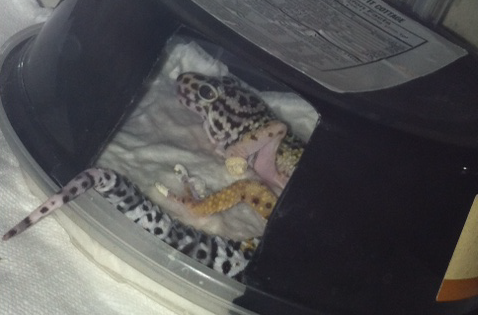 Please bear in mind that I don't have veterinary qualifications, I'm just giving you the best advice I can based on my own experience.

I really do feel that the best thing for this animal would be to take it to a vet asap. I understand that this isn't a possibility for you, but I felt like I had to put it at the start of my answer in case anyone else comes to this Q&A at a later date with a similar problem. You have been put in an awful situation here, having neither neglected the animal yourself, nor made any sort of financial commitment to its wellbeing. So I understand that this isn't something you are able to do, and I hope me saying this doesn't make you feel bad.

Reading your post, I see three big problem areas: the bendy limbs, the stuck shed and the not eating.

First, the bendy limbs. If you get a chance to take any more photos, that would really help, but looking at the picture it does really look like there is something wrong with her front legs. You also said she drags her body along the ground. This sounds highly symptomatic of metabolic bone disease.

Signs and symptoms of metabolic bone disease in herps include:

You mentioned calcium powder, but it wasn't clear whether this is just supplemented with food or whether they have any calcium in the terrarium. Mine just have a small dish of it that they can help themselves to (supposedly they self-regulate and will eat it if they need it). If you don't have one in there, you could add one. UV exposure also helps - that means get her into the sun without any glass in between (so take her out of the terrarium, open a window and let the sun shine on her directly. Be careful not to let her escape of course; maybe put her in a plastic or glass box with steep edges but no lid, so the sun can shine on her).

The stuck shed is the next issue. I have written some detail on how to deal with this already here; I suggest you have a read of that. The only things I would add is that if it's multiple layers of stuck shed it won't all come off at once. I've seen several people take in rescue leos on the leopard geckos group I'm in on Facebook, and it usually seems to take them a number of attempts, with a bit more shed coming off each time. She doesn't look too bad in the picture actually (just a bit on her toes; her eyes, tail, head, body and legs all look fine), but you did say you'd already removed some. And the second thing is that if she does have MBD her bones are going to be either brittle or bendy; either way, you should handle her really carefully.

Finally, the not eating. There are two parts to this - the loss of appetite and the loss of weight. The loss of appetite (i.e. the fact she doesn't want to eat) is a longer-term problem and something I doubt you'll be able to fix in just a couple of days. It's possible it's being caused by the MBD, or there's possibly a different underlying cause, like parasites or environmental factors. It can even be self-perpetuating; I've had geckos that stopped eating and then from that got fatty liver disease, one of which's symptoms is decreased appetite :/ If the animal survives, the owner should really get it to a vet to diagnose and treat the underlying cause to treat the problem longer term.

In the meantime, since it's not your animal, you should focus on the loss of weight. If she is as thin as you say (I can't see her body or tail in the picture), emergency feeding may be the best thing for you to do in the short term, just to get some fuel into her. I'll tell you the way we were taught to do this by the vet first, and then my recommendations for how to make do.

The way we feed ours (we have two not eating at the moment) is using a dry supplement food like this which gets mixed with water to make a runny paste and then squirted into their mouths using a syringe (the kind without a needle on the end). In the UK, that supplement food is only available by vet prescription, I'm afraid, but I don't know if it's different where you are. In the past, we had a seriously underweight one, and we were given a Prescription Diet A/D food which comes in a tin like cat food and is designed for malnourished animals rather than a more balanced food like the first one. We were told to mix it with sugar water and feed using the syringe.

If you can get hold of any kind of syringe (the kind without a needle), that would be perfect. There is only so much you can get them to eat by licking off nose, especially with decreased appetite. Failing that, any kind of way you can get the liquid (or solid) into her mouth. In general, sometimes it's best to force it in for the animal's longer-term wellbeing (since she will die if she doesn't eat), but you do have the added complication of possibly weak bones. (Don't force in live insects either, it can cause problems if the gecko's instincts are shot and she doesn't bite down to crush and kill them before swallowing.) You certainly don't want to break her jaw, so you're going to have to use your best judgement here. I've sometimes found that gently stroking the sides of the jaw can make the gecko open her mouth of her own accord.

As for the mixture itself, if you can get the cat/dog food designed for malnourished animals, that would work. Alternatively, there are numerous recipes online using various combinations of mealworms, cat biscuits, sugar water, the wet pet food I just mentioned, protein powder and vitamin supplements. This answer has got pretty long already (and I need to go to bed!) but if you have a Google around you should be able to find a few different suggestions for different recipes (some of them suggest putting the mealworms in a blender - I understand you may have mixed feelings about sacrificing a blender when it's not your pet; an alternative is to cut the heads off and squeeze the goo out - it's a bit gross, but it does have the added advantage of not using the chitin in the feed, since it's basically nutritionally useless anyway).

Hope you find something useful in all of this, and I wish you all the best.

Not the answer you're looking for? Browse other questions tagged health leopard-geckos or ask your own question.

14
My leopard gecko sometimes has trouble shedding. How can I help?

3
Leopard gecko not eating and acting strange
4
Tip of leopard gecko's tail fell off, what do I do?
7
Adopting (rescuing) a pair of Big pet store Leopard Geckos that were raised by uninformed - Help
3
Leopard Gecko Dying
2
My leopard gecko is bleeding under his skin!