What age will a male Swainson's Lorikeet remain fertile until?

My friend has a mated pair of Swainson's Lorikeets (Trichoglossus haematodus moluccanus), a subspecies of the Rainbow Lorikeet, that he hopes to breed.

The female is 3 years old, and has just laid her second clutch of eggs since my friend got her. The male is 15 years old and is a proven sire, though with a different, now deceased, female. The birds have sex frequently but the first clutch of eggs were clear, so he's concerned that the male may no longer be fertile. These birds can live to their late 20's, so 15 seems a little young to stop producing sperm. A bird specialist vet examined them recently and said they were both in good health; my friend didn't have any fertility tests done at the time (he says he will if this clutch also turns out to be clear).

Given all of the above, until what age will a male Swainson's Lorikeet typically remain fertile?

Rainbow lorikeets male and females reach sexual maturity at 2 years and are known to be fertile for most of their lives. So it could be a safe guess to assume that this male could remain fertile well into his 20s. This would depend upon his actual individual life expectancy, and health. As failing health is generally a precursor before death, if he is unwell, then this may have affected his fertility.

It would be hasty to assume that one empty clutch means he is no longer fertile. These bids generally pair and mate for life. I am unclear about whether this would affect the fertility between a new pair when a long time mate dies.

There have been difficulties breeding birds raised in captivity, due to behavior problems, as opposed to fertility per se. Also, males can react to other males, even their own offspring within an aviary. It would be hard to make an actual diagnosis, or well educated guess, if there is a problem and what it may be without more information.

If the next clutch is empty, perhaps then your friends could seek some advice. The fertility problem could also be with the female.

Rainbow Lorikeets can be very long-lived. Females can breed until they are into their twenties and males can retain their fertility even longer. In Australia, a female Red-collared was 35 and breeding until 12 months previously. (1) 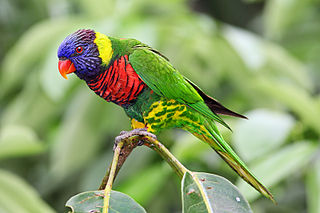 image courtesy of wikipedia One of my favorite birds, we have always had them in our garden, wherever we have lived.

Not the answer you're looking for? Browse other questions tagged birds parrots breeding or ask your own question.

11
At what age can/should a baby rabbit (kit) be separated from its mother?
2
At What Age/Weight Should NZW Rabbits be bred?
4
At what age can a Cat get pregnant?
6
At what age should we get a Cockatiel baby at home?
4
What is an ideal age gap for between parrot friends?
2
What to do about our two male cats?
4
What should I do with fertile eggs if I don't want chicks?