Why does my dog prostrate (stretch)?

I noticed that sometimes my dog usually prostrates, stretching his fore legs with face towards the floor. He does this early in the morning when I wake up and we see each other, when I get back from school, or when I go out and then come back, etc. I am wondering if this is some kind of greeting.

Why does my dog do this?

Image of a dog prostrating (stretching): 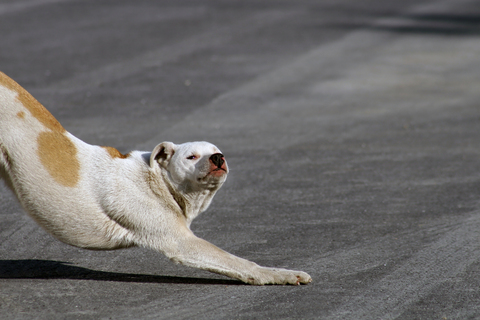 Older dogs frequently greet their owner's like this, as younger dogs and puppies tend to be exuberant and bounce around the place.

The stretching, is most likely, caused be the fact he's being lying down and needs to stretch (as mentioned in the comments). It's a sign of relaxed happiness to greet you like this, as a dog generally won't do this when a stranger turns up.

The fact that the dog has his head lowered (apart from the fact it's a nice stretch) and not the opposite (with his behind lower and head stretched up) is an indicator that the greeting is non aggressive.

If your dog is submissive, he’ll lower his body or even cower on the ground. His head might be raised, though, if he’s greeting a person or another animal.

Chances are he gets a pat when he greets you like this, so he would have learnt that this is a smart way to greet his owner, as it i not boisterous, nor domineering, but endearing and he gets a pat.

6
Why do my guinea fowls cry unnecessarily?
6
Why does my rabbit kick litter?
7
Why does my boyfriend's dog hate me?
4
Why does my dog poop on 'higher ground'?
4
Why does my dog love her furry toys?
36
Cat is tipping over bed-side lamps during the night
1
Why does my sister's dog pinch with his teeth?
3
Why does the Dog let its head drop hard onto the floor when it rests?
1
Why our dog seems to protect me but not my significant other?
1
Is it a good idea to take another cat when my current cat is a real princess?