I know that chocolate is bad for dogs, but is it bad for hamsters too? I would like an answer from a credible source.

Theobromine is the principal alkaloid of the cacao bean. It is extracted from the bean husks and used in the synthesis of caffeine. It has been used in various pharmaceutical products. Theobromine is consumed in coco a and chocolate beverages and in various forms of chocolate-based foods. Theobromine is also present in small amounts in green coffee beans, tea and mate. (1)

The following diagram shows the varying levels of caffeine and theobromine within different chocolate sources. 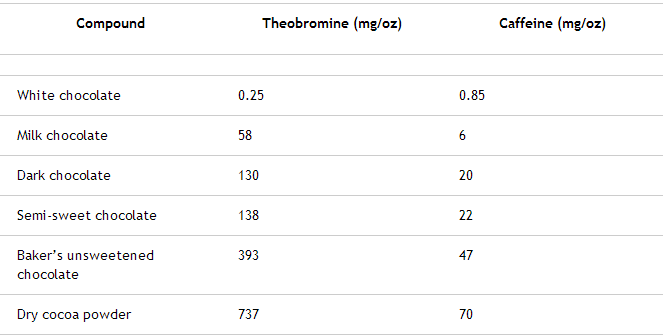 image courtesy of St. Francis Animal and Bird Hospital and

18
Should I worry if my cat accidentally ate some chocolate?
4
My hamster ate a bit of chocolate ice cream

18
Should I worry if my cat accidentally ate some chocolate?
9
Light spectrum visible to hamsters
8
Is it safe to take a small (such as a Robo or Chinese) hamster in airplane, or can they "explode"?
3
How high can an unprotected second level be in a hamster cage?
3
Can I use any type of wood shaving for my hamster
4
My hamster ate a bit of chocolate ice cream
3
Is there anything more that I can do to make my dwarf hamsters more comfortable and happy?