Our cats eyes keep watering but she seems fine, should we be worried? 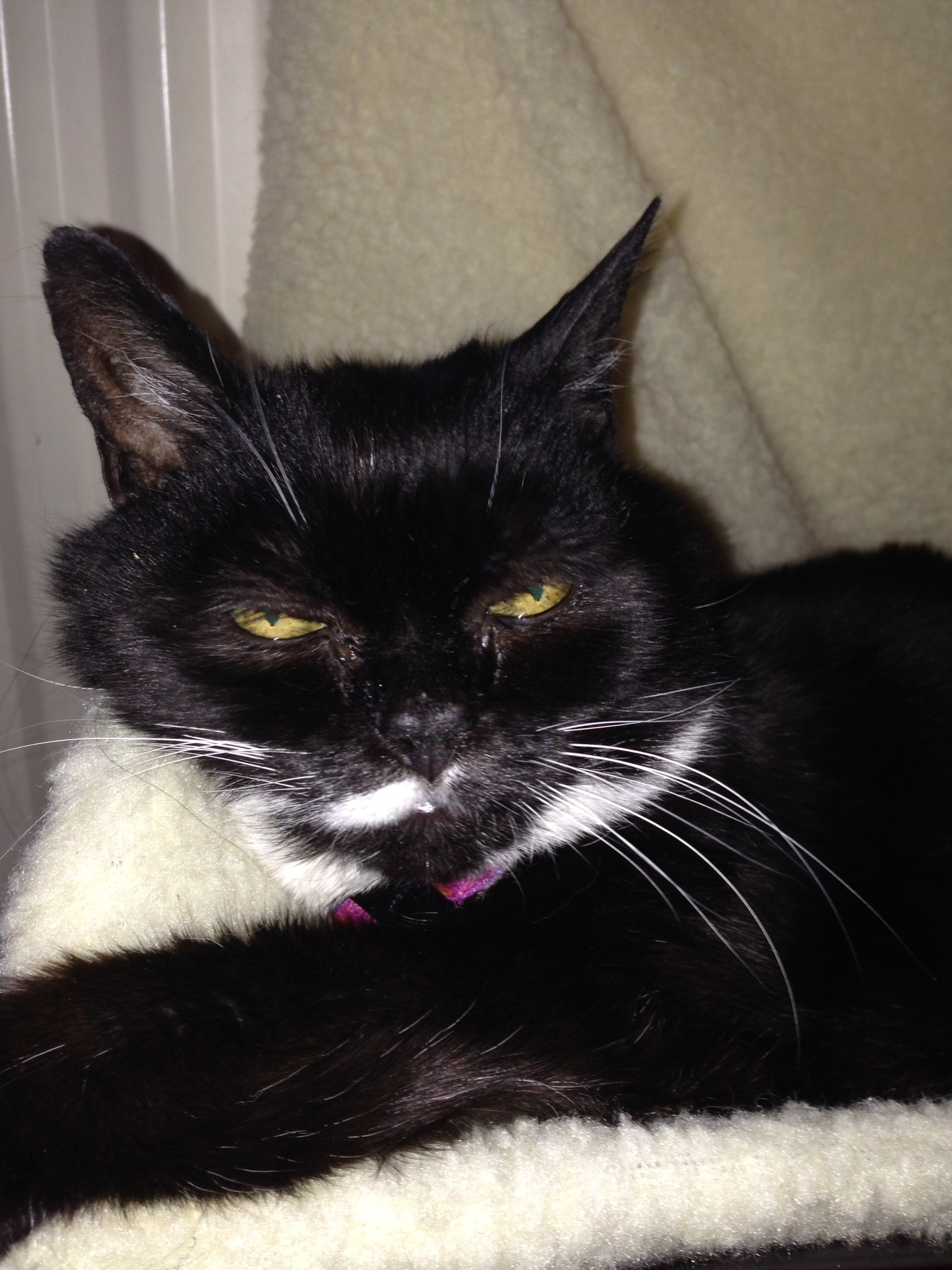 When we adopted our cat from a rescue & re homing centre a few weeks ago she had very watery eyes.

We were told it was most likely the shape of her face and that she'd been seen by a vet who confirmed there was no sign of infection in the tears.

Her eyes are still very watery and the tears tend to have a brown colour to them, however her eyes are otherwise bright and clear. There is no sign of her eyes being blood shot or the third eyelid being visible. She doesn't fuss at them or show any sign of them irritating her.

So, is this normal? Should we be bathing them? (she hates that)

Any advice would be welcome.

Cats who have been in group homes are often infected with the feline herpes virus. The ASPCA lists symptoms of a feline herpes infection as

There's no reason to worry, however. First, humans cannot catch feline herpes (it's a different virus than human herpes). Second, most cats recover from the symptoms of herpes.

Feline herpes is aggravated by stress, so if your new friend already had it before the re homing center, the stress of being in the center probably caused a flare up. If your cat caught it while at the center, it may take a few weeks for her immune system to control it.

However, a few cats are never able to fully rid themselves of the symptoms of feline herpes. One of my four has daily sneezing and nasal discharge from it. Otherwise he's fine and lives a normal life, we just sometimes wipe his nose (and our walls).

If your cat is unable to put the virus into remission, then you'll want to watch his eyes for worsening symptoms (sometimes eye problems from feline herpes can develop into eye ulcers). Cornell University gives the symptoms of a eye ulcer:

The clinical signs of corneal ulceration include inflammation of the tissue surrounding the cornea; seepage of discharge from the eye; clouding of the cornea; and apparent hypersensitivity to bright light. An affected cat may squint, rub its eyes, and behave as if it is having vision problems.

If you notice these signs in the future, you should take your cat back to the vet to be evaluated for an ulcer. While most ulcers will heal on their own, they can cause severe discomfort and in rare cases can permanently affect the cat's vision.

I also check with my vet regularly (once a year or so) to see if there are any new treatments for feline herpes, so that's another thing you can do.

The good news is that you already took your cat to the vet and confirmed that she doesn't have an eye ulcer. You can clean the discharge if it seems to bother her (use a damp, warm washcloth), or just leave it.

Even though I'm not a vet, feline herpes is extremely common in rescued cats, so it's a reasonable suspicion. Your vet probably sees this problem daily and didn't take the time to explain it. I don't have a particularly good feeling about a veterinarian that doesn't realize as common as it is to THEM, it's new to YOU.

Considering the lack of swelling and secondary symptoms, and her recent check by an RSPCA vet who ruled out infection, I'll answer this on the assumption that there is something other than an infection going on.

Here is a handy list of reasons why a cat's eyes can run.

The overproduction of tears is most often a reflex, activated to expel irritating material from the surface of the eye or when significant irritation develops inside the eye. Although uncommon, epiphora may also result from overactive lacrimal (tear) glands and be unassociated with any source of irritation.

Normal cats may occasionally have minor tear overflow or minor eye discharge. However, excessive, chronic or recurrent bouts of epiphora suggest a problem may be present.

While tears are typically colorless, they can dry to a dark red-brown-black crust, especially in the cat. Chronic tearing can also result in a brown to rust-colored staining of the hair around the eyes and face of animals. This is believed to be due to porphyrins or other pigment-like substances present in the tears.

See this write up on excessive tearing.

Here is an article by a vet about 'flat-faced' cats and their tendancy towards runny eyes. Note, the vet recommends a vet visit anyway to rule out conjunctivitis.

When rehoming a pet, it's best to visit your vet anyway to establish a baseline, even if the cat has been seen by an RSPCA vet previously. If you are worried, and it's bothering her, you can call up your vet and discuss whether or not she needs to see them, but my bet is they would recommend a visit.

I have a cat with a similar problem, also verified by a vet to not be an infection. He is part Persian, and a side effect of the shorter snout is some problems with tears draining into the throat inside the eye. It is just a side effect of the aggressive body shaping breeders have done.

The color is normal for excess tears plus the dust they flush out.

I try and use a tissue to wipe down the area and clean out the crustyness daily, but otherwise it has not been a problem

Not the answer you're looking for? Browse other questions tagged cats vision or ask your own question.

10
How should we handle our two new senior cats having different food than what our other cats eat?
6
I inadvertently left my cat home with out food and water for 4 days. Is she hurt? She seems fine
6
What can I do if my cat is stuck in the washing machine?
3
One of our cats is afraid of me, but not of my wife
1
Should I be worried about neighbours' cats in the context of my outdoor rabbits?
7
How can I keep our cats from endangering my pregnant wife?