Should I modify a "cone of shame" to allow my dog to use chew toys, and how?

Recently, my neighbors dog jumped the fence and attacked one of my dogs. Her ear was torn and she had to get stitches. Originally, the vet said she probably wouldn't need the cone of shame, but when we mentioned we have another dog, they recommended using it.

Our dog is large (~50 lbs) so the cone is big. Unfortunately, it engulfs her entire head, extending so far that she can't chew bones or toys. The injury is on the back of her ear, so my impression was that the cone was meant to prevent her or our other dog from licking or scratching at the injury. My dog is really depressed and it's only day two. I was wondering if it would be OK to cut the cone to make it shorter, so that it only protects her ear, and allows her snout to extend past the cone so that she could hold and chew on her chew toys. I attached some pictures of how large the cone is, as well as the injury (back of right ear) if that helps. 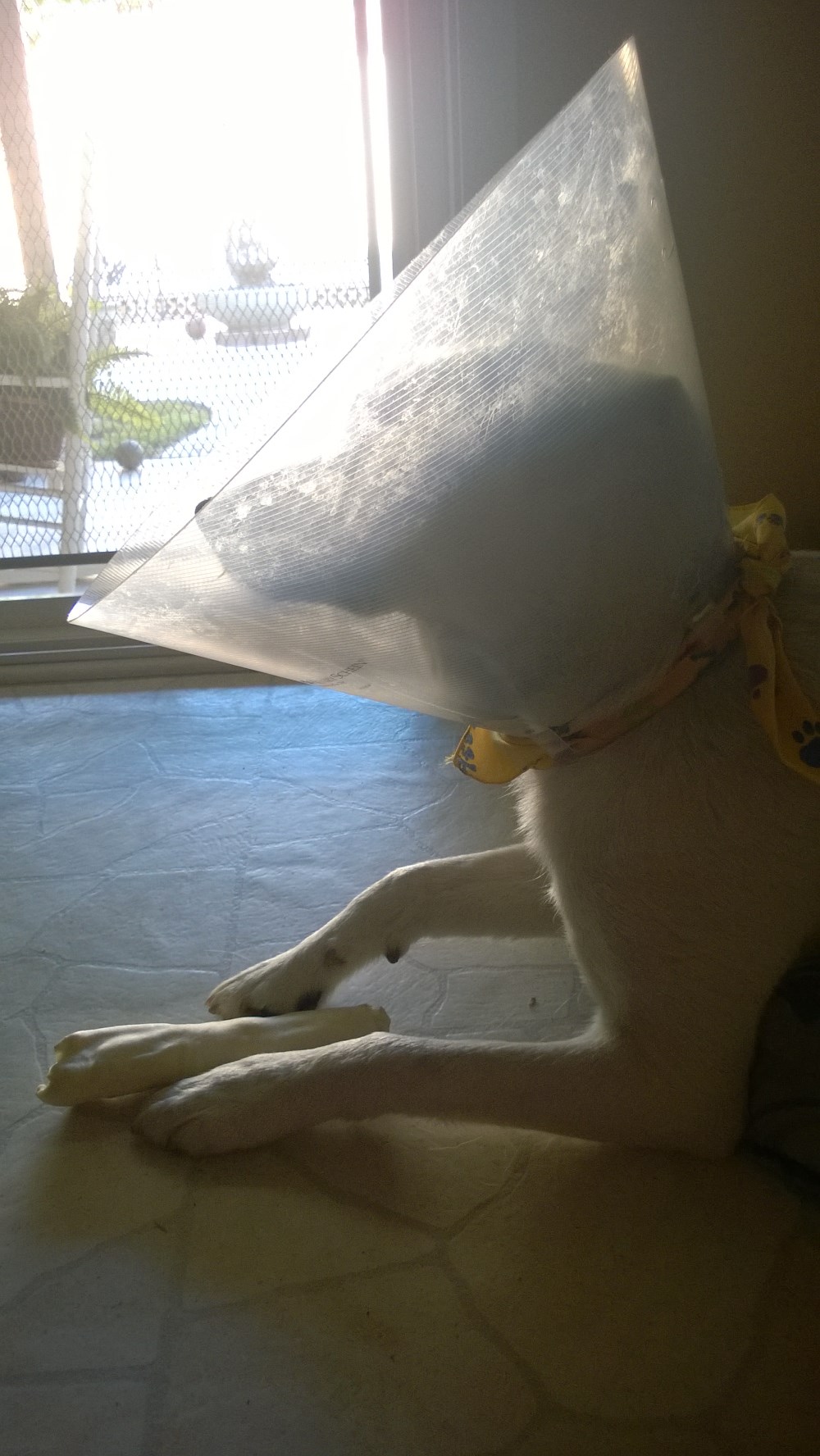 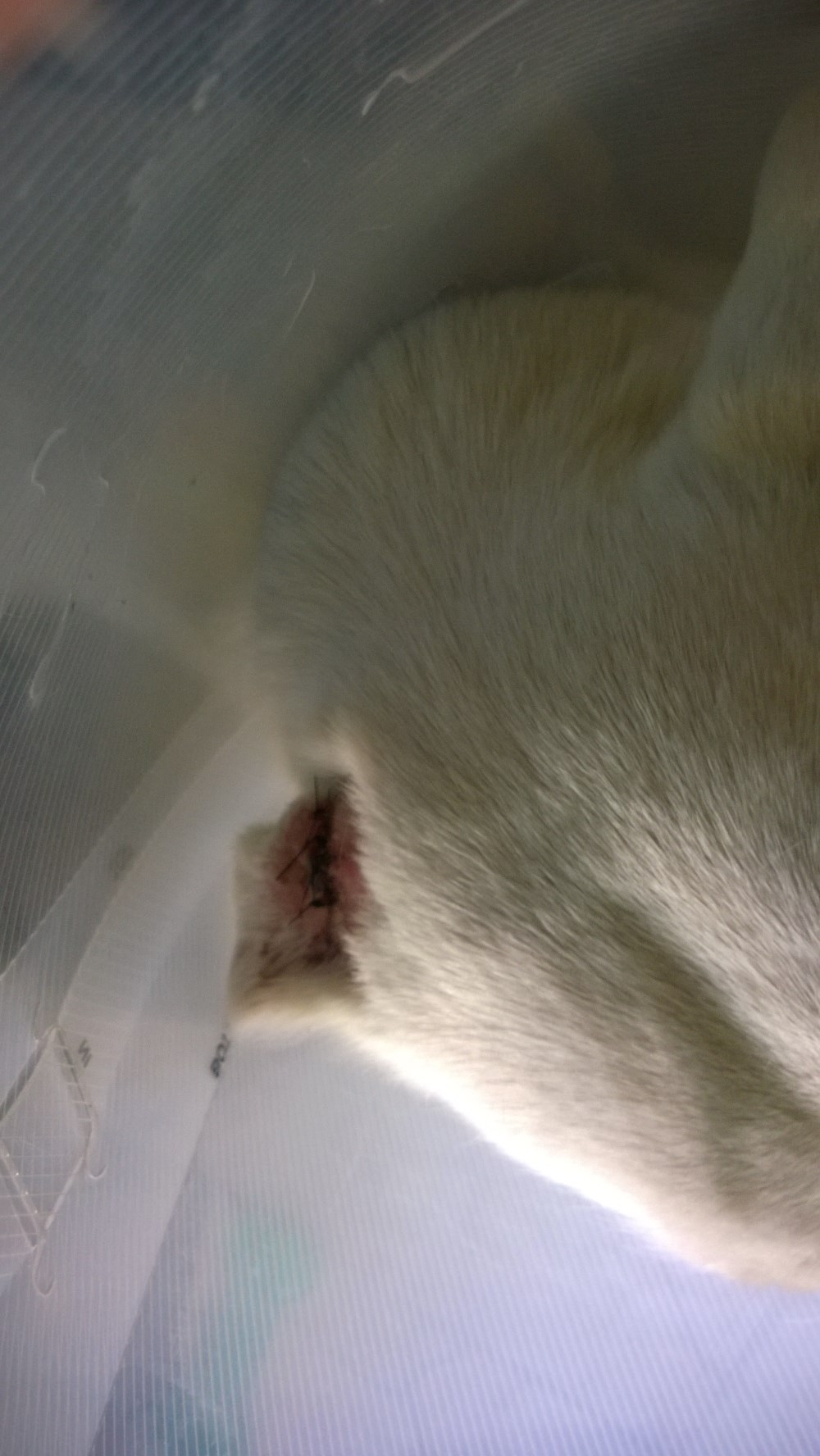 It is my understanding that cones come in standard sizes, and I don't believe they are trimmed down because you can accidentally create a sharp edge which the dog can potentially hurt herself (or her tongue) with. The hurt dog will only be able to get at the ear from behind, so the cone should remain effective if not trimmed down significantly.

The cone is on your hurt dog's head to protect it from your second dog's interference (read: licking the wound). That being said, if you have a second cone to replace it in case you screw up, I don't see anything wrong with trimming down from the standard size, as long as it won't expose the ear to a tasting-assault. I'm not a veterinarian, but this is what I'd try based on rationalizing the scenario that you've explained.

Now, how do you trim safely to not leave an edge? The cone is plastic, so you need some good shears to cut. I'd go down 0.5-1 inch at a time around the entire edge, and retry it on your dog each time, seeing if she can get her treats and still be unable to touch herself with her front or rear paws. You should have some fine grade sandpaper to dull the edge you've clipped and remove any sharpness which might scratch your dog. Make sure you dull the edge of your final product, and try to keep an even edge. Try not to trim the strap that keeps the cone together too much, or it might no longer hold.

Only do this if you have a spare cone in the wings to put on in case you go too far. You can always ask your vet for advice on this as well, as that should be part of the service you've paid them for.

JoshDMJoshDM
9,0371010 gold badges4646 silver badges106106 bronze badges
Add a comment  |
-1
Want to improve this post? Provide detailed answers to this question, including citations and an explanation of why your answer is correct. Answers without enough detail may be edited or deleted.

We use the Comfy Cone Pet E-Collar ones for our dogs and they allow the dogs to enjoy most of their chew toys.

Not the answer you're looking for? Browse other questions tagged safety injury or ask your own question.

15
How can I tell the difference between play and aggression at the dog park?
10
How should I treat an open head wound on my dog until veterinary care is available?
3
My staff attacked my jack russell
6
Is there a safe dose of vitamin D to give a cat?
1
Is it possible for a dog with a torn ACL to start walking normally without any medical treatment?
11
Should I take my dog's favorite tug-of-war toy away from her to prevent her from potentially eating pieces of it?
1
What should I use to discourage my small dog from pulling while walking?