How can I free a snake from duct tape?

I left some strips of duct tape on my patio because I was gonna paint it, and a milk snake or king snake from outside got tangled in it. Sorry, but touching it is out of the question.

I'm trying a little water, then dirt, and agitating the tape; it seems be working, but slowly. Unfortunately, his head is glued to the tape along with about 60% of his body. Any suggestions? 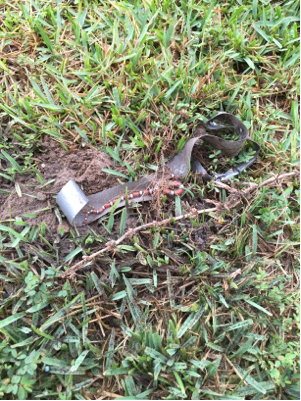 So a couple of things I learned/observed today:

For a snake, a snag on duct tape is maybe our equivalent to jumping into frozen water, or a bird getting wrapped up around twine - everything works against you. A snakes serpentine / corkscrew movement only causes him to become further stuck and entangled to the tape. I could honestly see using the stuff as an effective method of capture, like some rat and mouse traps do, but a lot of reading I've done today really has shown me that there are rarely ever needs to kill wild snakes. Just leave them alone, they will do the same if you're not stupid.

For freeing the snake, dirt helped a lot. I imagine it didn't bother the snake. Dirt immediately adhered to any remaining sticky surface on the tape, preventing the situation from worsening. When the snake freed a part of himself, the dirt prevents that surface from sticking to something else.

Quickly cutting off larger pieces of tape also prevented it from getting worse.

After spraying him lightly with hose water, then gently spritzing the guy with vegetable oil, I put some of the oil in a clean sprayer and misted him a couple times. I'm not too certain the oil did much, but I know oils will break up sticky substances; with time the snake might have freed himself with those things alone. I guess if it was venomous, probably best to stop at this point if you decided to help it all along.

Moving him from my cool patio concrete floor to the warm sun definitely increased his energy, and that helped him break free about 30% more of his body on his own.

He seemed exhausted after that time; I thought I'm probably running out of time. Got some garden gloves, pinched one end of the tape with two fingers on my left hand, pinched the tip of his tail with two fingers on my right and peeled them apart, slowly but steadily, in about a 3 second sweep, he came off. When his head freed, I screamed like a girl, threw him about 10 feet (3 meters) away, got a weird look from my very attractive neighbor, and watched him scurry off. I think if I would have tried head end first, it would have been too traumatic. I think their skin is a little thinner up there.

I've no idea if he has survived the day, but he did run off. Unfortunately, there was chunk of tissue remaining on the tape, it looked like from the midsection, not completely sure what caused that, maybe skin plus a few millimeters. The snake should have saved today for his molting and this would have been easier.

The last thing you want to do is forcibly remove the snake from the tape. Doing so will harm the snake, by pulling off its scales.

Sorry, but touching it is out of the question.

Unfortunately you're going to have to get close if you want to save the snake. It's a harmless snake, so you have nothing to be afraid of. You can wear gloves if that makes you more comfortable, or have a friend help you.

The first thing you want to do is carefully trim away the tap that isn't stuck to the snake. You'll want to avoid having it get stuck even more.

The trick to removing the tape is using vegetable oil. It will be harmless to the snake and will interfere with the glue on the tape more than water will. Use a cotton swab to apply the oil to the edges of the tape, and slowly work it free. This is where you will most likely have to hold the snake, as it will be stressed and try to escape.

Just make sure to be extra careful around the snake's mouth, because the oil could potentially block the airways that run along side the mouth.

I can't tell from the picture, but if the tape has stuck itself to the snake's eye, it would be best to take it straight to a veterinarian to have the tape removed, just in case it ends up removing the eye.

You got it done before I could answer, but I heard WD-40 is great. See this: http://www.independent.co.uk/news/uk/this-britain/wd40-the-scourge-of-snakes-beavers-and-cocainetaking-clubbers-6154457.html

4
Why are my snake's belly scales turning yellow?
9
How to proceed with a pet snake that starts jabbing when held?
4
How do I heat and/or build multiple snake enclosures?
3
My dog eats dirt from weird places then throws up
4
My snake has started shedding, but seems unwilling/unable to finish
3
My snake died suddenly
3
Ratsnake with mouth deformity
2
Is my ball python hungry or not?
4
Can a red belly black snake kill a horse? How would I know if my horse has been bitten?