How can I keep my dog from barking when I don't know what he's barking at?

We have a young male Husky/German Shepherd mixed breed. About a year old, pretty good size. Let's call him Tobias. He has a friend, an older male Alaskan Malamute, named Titan, who is about 5 years old. They stay in the home a good part of the day, and go out together about 3 times a day.

Often when they are outside, Tobias will begin barking for long periods of time and for no apparent reason, which of course often ends up enticing Titan to bark as well. We moved into a pretty large neighborhood a few months ago and we are afraid we will start getting complaints.

We have tried to narrow it down to what causes Tobias to bark, but have not been very successful. Sometimes it is a passing pedestrian or bicycle, but even something so trivial as a newspaper page or plastic bag in the yard blowing in the wind will trigger the barking.

Tobias gets excited very easily, although he is not mean. He won't even hurt cats in the house. Outside, he is on a zip line spanning about 30 yards. Titan is on a fixed line tied to a nearby tree. They are long enough for them to meet to play, or spread out of each other's reach. I drew a quick illustration. 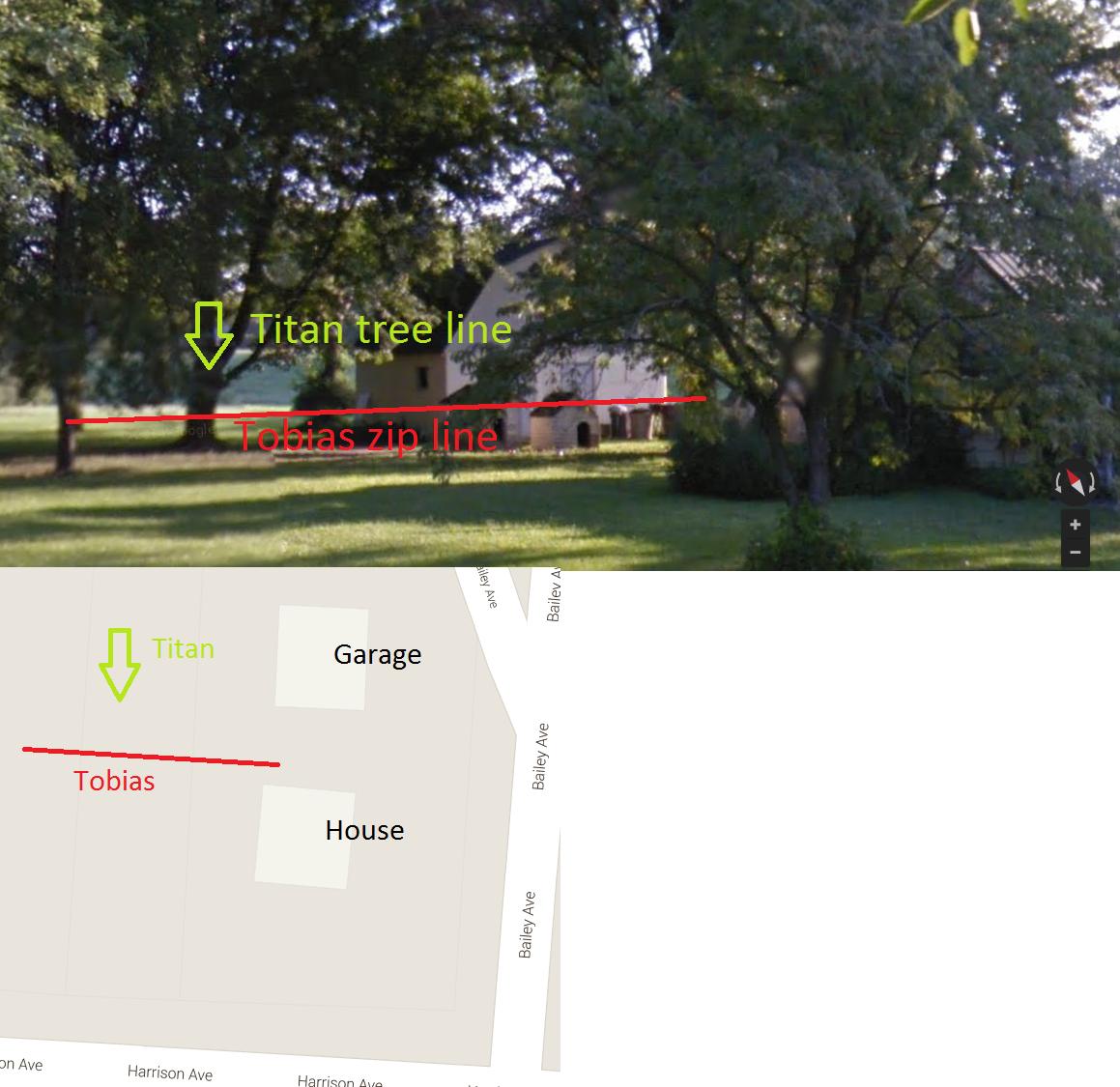 The previous residence was on a farm, and they were staying outside pretty much all the time, in a large fenced area with a dog house big enough for both. I remember him barking at deer and other animals fairly frequently, which is behavior I would expect, as Titan did that as well before we got Tobias in there. The area was not close to the road and did not see much foot traffic.

We are not sure if it has to do with Tobias' breed, if he is just twitchy or if we need to change their positioning. Any suggestion as to how to change this behavior is highly appreciated!

I think you're perhaps looking at the wrong thing - it's actually quite hard to train a dog to not do something, because they don't really understand how to 'not do it' or indeed what you mean when you say 'stop it'.

The way you get a dog to not do something is train incompatible behaviour. But to do that, you need to know the cue, and train them to do something incompatible on that cue. It sounds like with this case, you don't know what the cue is. Frankly it could be anything - dog's sense of smell and hearing is generally better than people, and so some sound that you can't hear could quite easily be the cause.

Fortunately, barking is one thing that you have a chance - the Humane Society suggests: http://www.humanesociety.org/animals/dogs/tips/how_to_stop_barking.html

But one of the interesting ones is - perhaps counter intuitively - train your dog to bark on command. Once you have done this, it becomes a lot easier to teach your dog 'stop barking now'.

Which is perhaps one of the most reliable ways of doing it. One downside though - with any training regime, there's no instant answer I'm afraid. You may need to spend a while being a bit more proactive about distracting your dog when the barking starts, with high value treats.

Not the answer you're looking for? Browse other questions tagged dogs behavior training vocalizations or ask your own question.