What could cause my dog to bite/pull her own hair out?

The title pretty much says it - my dog, Chewy, has been biting and pulling the hair out on her front arms. Her name was given before this problem started. :)

It's not every day, and I cannot find a pattern but about every week or so I'll come home from work to chunks of hair pulled out around the house (normally all in the same area where she was laying), or wake up to what sounds like carpet being ripped out, which is an awful sound.

This has been happening for probably a year and a half.

She is about 2.5 years old and is a Chow/Lab mix. She is honestly the nicest dog I have ever been around and NEVER gets aggressive (I only mention that because I know it is common for Chows to be aggressive/protective).

She was fixed as soon as she was old enough.

What we've done/tried so far

We've moved 3 times since we've had Chewy, which I think has contributed to her anxiety of being in a new place. However, we've been at our new house since July 2014 so I would hope that wouldn't be an issue now.

She also has a fascination with being under things. Coffee tables, end tables, chairs, our bed, anything she can fit under, she'd rather be under it. She sleeps under our bed every night, and is under our coffee table in front of me as I type this. I've read this could have something to do with feeling protected.

I should also mention that she isn't shy at all. She has no issues with people or people coming over, etc.; she greets anyone and everyone pretty much immediately. That is why I am unsure about her feeling "unprotected" when she is always under something.

I am not 100% sure that Chewy has allergies, but she might. When she was a puppy, our vet told us that she might have allergies and suggested we switch to a grain-free food. She's been on grain-free food ever since, although we aren't too particular when it comes to treats, etc., not having grains. She doesn't appear to have allergies to me (but I am not a vet and she hasn't been tested for allergies to my knowledge).

I've also considered the fact that she might have dry skin, which could cause itching and thus her biting her arms. She honestly isn't bathed very often. She's an indoor dog but we really only bathe her when she absolutely needs it (i.e. gets muddy outside). I'm wondering if she needs to be bathed more often, possibly with a shampoo that can moisturize her skin?

Here is what her arm looks like right now, you can see the baldness (this is her left arm), although it doesn't look that bad right now: 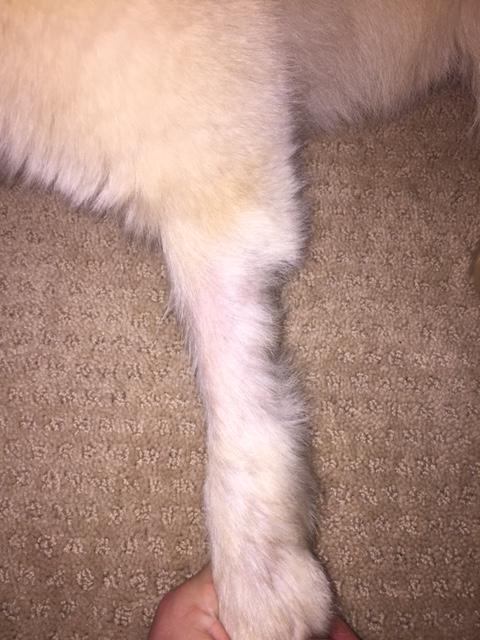 Has anyone ever seen or heard of a dog doing this before or have any ideas/suggestions that we could try to get her to stop?

I'd recommend taking her to the vet immediately because often times this is a sign of a health condition that may need medical attention. She may have pain or discomfort from a more serious problem, or it could be something very minor like a skin irritation.

This may be related to anxiety from the moving but since you moved a almost a year ago it may be something else in her environment that is causing this anxiety. You may want to try giving her something much tastier to chew on besides her leg. Just make sure that you give it to her before she starts chewing on herself and not as a reward for chewing on herself.

One thing that I have used that works is putting a kong toy in the freezer with peanut butter in it. I find this will distract my dog for hours and may keep yours from resorting to chewing on her own fur. Anything that you can do to distract her and keep her from doing the negative behavior will help.

My sister-in-law's dog did this. It actually turned out that his paw was broken.

If you do decide to wash your dog once a month or more, you may want to look into the type of shampoo since the pH of their skin is determined typically by breed.

Our Schnauzer mix will pull out all the hair on his back he can reach when he is fed food with either corn or grains, we are not sure which. We heard this was potentially the problem and switched, within a month the hair was growing back and he left it alone. Several months later we forgot, and ended up with 1 bag of corn/grain containing food. (we mix two types of good quality dry food) Right after that his hair started disappearing. (by being pulled out) Back on Corn and Grain free, and his hair grew back.

Give this at least a month, maybe 6-8 weeks. No treats, as they often contain corn and grain, so stay away from them. This is critical for smaller dogs, as it will affect them more as a percentage of body weight and food consumed. If you can't live without feeding your dog treats, find grain and corn free ones and gradually get them switched over. Stay away from made in China anything.

Another irritant for dogs that can show up as hair being pulled out is fleas. We have found that Frontline works for us, or a generic equivalent. A 3 month supply is fairly inexpensive if bought direct, and not through the vet. (PetSmart, etc.)

I would go with the gradual food change to avoid diarrhea and see how that goes after 6-8 weeks. If you notice fleas around, on your dog, or know they are present in your area then do both.

It is simple yet amazing the recovery. Just as an FYI, we mix Nature's Recipe and Costco, both Lamb and Rice and Corn and Grain free.

Does she lick at the areas? A few suggestions that may be helpful:

I know that sound for sure. I have a Yorkie Poo and she does the exact same thing. So I took her to a dog dermatologist. Yes there is a such thing. Anyway she is allergic to her environment. My dog hates to walk on grass and I have poison ivy in my yard which I believe she steps in so check your yard too. He cleared up a bacteria and yeast infection she had with a special shampoo, two pills, and ear drops. After that my dog has to get an allergy shot each month. Her hair grew back immediately. And she stop lick/picking her paws. I hope this helps.

Not the answer you're looking for? Browse other questions tagged dogs behavior grooming anxiety or ask your own question.

2
Pulling hair the all over the body
1
pulling out her hair
13
Can I use human shampoo to wash a dog?
4
How can I be certain my dog's fleas are gone?

8
Repetitive Paw Licking
3
How do I train my dog to pee outside and stop chewing cords?
3
What does it mean if a dog pulls out another dog's hair?
4
Miniature Schnauzer Thicker hair grow after skin problems
0
Harness is matting dogs fur
4
What could cause my dog's rash and yellow flakes besides allergies?
6
What are my options for putting my own dog to sleep?
7
Dog has issues to stay home alone after move
8
My cat is terrified ALL THE TIME. How do I fix this?