What can I do about the recurring cyanobacteria in my aquarium?

I seem to have a recurring issue with cyanobacteria in one of my tanks.

I have treated it in the past, but it keeps coming back. Perhaps I'm not treating it for long enough?

I'm considering using one of these products from Amazon that claim to be effective against bacterial infections:

Are they the right product to use? Is there a better way to treat the cyanobacteria?

Maintaining a healthy tank/preventing cyano has many considerations. If you have a small/simple setup, just do regular tests/water changes and just skip to TL;DR for the immediate cure.

Cyano growth is driven by many of the same factors that promote algae growth. The most common is overfeeding. Fish food and waste introduces phosphates (PO4) and organic nitrogen compounds (henceforth referred to as ONC), which are initially broken down to ammonium compounds (ammonification) into your tank. If nitrifying bacteria are present -- most often introduced on live rock, but now comes in a bottle with mixed success -- they'll perform a process called *nitrification; which is roughly converting Ammonia/Ammonium (NH4/NH3) → Nitrite (NO2) and Hydroxylamine (NH2OH) → Nitrate (NO3). Denitrifying bacteria must then convert the nitrates into free nitrogen (N2), which is dissipated through surface agitation. This and other processes are referred to the all inclusive term, the 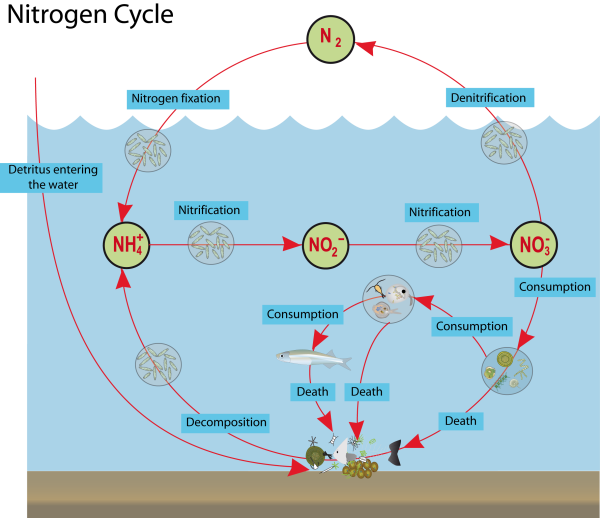 Plants and algae uptake these same compounds (as well as phosphates) and process them in reverse order (assimilation), but instead of releasing free nitrogen they store ammonia and phosphate for growth; as well as turning carbon dioxide into oxygen (CO2 -> O2).

Macro algae is my favorite method of Nitrate control. It not only works well, but the right type is the favorite food of many fish. Since they do accumulate phosphates and ammonia, it's recommended you cull the macro every so often to manually remove these elements from the tank. Additionally, you macro has no room to grow, it will no longer be using up the ONC you're trying to get rid of. If you do opt for the type of macroalgae that your fish like to eat, you may need to grow it elsewhere, like a sump or you won't have it long. But realize that some macros drawbacks: Some aren't as good at exporting nutrients, some are invasive, fish won't eat all algaes, etc.

A protein skimmer is one of the best methods of controlling organic nitrogen. It helps remove fish waste and excess food before it has a chance to ammonificate. Other chemical and mechanical filters also exist, but I don't use them much so I won't speak on their behalf. If I get a media reactor or ozonator I'll update. Protein skimmers also have the added benefit of surface agitation, aiding in dissipating free nitrogen as well as dissolving oxygen.

Work great for removing all sorts elements from your tank. They work a little too well and are bad for anything requiring trace elements. I avoid carbon like the plague.

There are many organic mediums that do the same job as nitrifying bacteria, helping the process along.

Large tanks with poor circulation can suffer from pockets of built-up ONC called dead spots. Power heads are pumps that circulate your water to allow efficient removal of ONC, with the added benefit of fish exercise, feeding filter feeders, and regulating consistency of temperature/pH/salinity.

Old/poor lighting also promotes algae and cyano growth. Grow bulbs have a spectrum that extends beyond the visible to where most plants photosynthesise (UV). After 6-12 months (depending on the type of lighting -- LEDs will can last much longer), the bulbs should be replaced as their spectrum will likely have fallen below what your plants require; anything needing this spectrum of light to photosynthesise won't be nearly as efficient at processing the nitrogen and of course algae and cyano have no problem using this spectrum.

Improperly filtered water is full of all sorts of compounds that detrimental to your tank. Tap water usually contains phosphates, nitrates, copper, and many other things you don't want -- especially saltwater.

A few people claim certain animals will eat cyano. I have never had success with this, but I can't say I've tried too hard. The thing to remember that even though cyano is often called blue/green algae, brown algae, [whatever ugly algae], it is actually bacteria. It is thought to be toxic for many that try to eat it, but I'll stop the conjecture at that.

What You Should Be Doing

The biggest culprit is over-feeding. Only throw a little food in at a time. The extra that falls to the bottom is often not eaten and just pollutes the tank. Avoid the temptation to over feed. Smaller feedings 2 or 3 times a day is preferred over a large feeding once and never more than they can consume in a few minutes. Also, more nutrient-dense food will pollute the water faster.

Test often, especially if your tank is young. A routine water change is often the preferred method of removing nitrates. If you have nitrifying bacteria, you're limited on how often you can do a water change. Otherwise you run the risk of reducing your bacteria to critical levels (see tank cycling). Many mature tanks only need 10-15% change every 2 weeks; I do %20 once a month and that's only as an alternative to dosing my corals. If you have certain parameters really out of whack, you should be able to get away with 10% every 3 days for a few changes. This is only a general rule of thumb and will vary widely by the efficiency of your filtration, the type of animals in your tank, and your experience in dosing. Just be careful to do match the parameters of the water coming in.

pH plays an important role in your bacteria's ability to function

For most people algae is inevitable and to a degree even somewhat beneficial by providing oxygen, food, and denitrification. It's a strong competitor (most of the time out competing cyano and everything else). Keep an eye on this one, it's a great early warning of excess ONC. In my opinion, the best thing about algae is that it's an excellent early indicator of your parameters getting out of control.

Surface agitation, while helpful and completely necessary, also introduces CO2 from the atmosphere into your tank - encouraging algae growth and lower dissolved oxygen. The air in your house (depending on where you live) will have higher CO2 than outside. For this reason, some people opt to pull their tank's air intake from outside.

So now that I've covered the basics of avoiding cyano, what to do now that it's a problem? If you don't have anything photosynthetic (I know you have plants but I just want to cover it), you can "black out" your tank. That's when you completely cover the tank and allow NO light in. It doesn't bother the fish much and will kill the cyano.

Antibiotics are quite effective at killing cyano as well. I'd recommend you remove as much of it manually as possible first. Turn off your pumps and start scraping with a siphon right behind. The antibiotic is going to leech oxygen from your water, so increase your surface agitation (ie add a bubbler). The antibiotic usually takes 24hrs to work, so be ready to do a large water change immediately after (I go for 20%). If you have a protein skimmer, it's going to go crazy for the first few hours. This is normal, just stay on top of it.

Garry's answer did a really good job explaining from where cyanobacteria comes and how to prevent it. It does give a good answer on how to get rid of it but I personally don't really like to add chemicals to my tank if there is another way around it. In this case there is a really simple method to get rid of cyano and at the same time of the phosphate that it's feeding of. Of course, after it is gone you will still need to stay on top of your maintenance and to reduce feeding to ensure it doesn't come back.

This is a method I read about on several forums (unfortunately, those are in french but I can still had a link if requested). This method will cost you about 1$ and some time depending on your tank size. In my case the tank was a 15gal with a fairly heavy infestation and it took me about 10min per 2-3day for about 2weeks.

First go buy yourself a baster in any 1$ store. This will never go near your kitchen after the first use, so buy a new one. Use the baster to suck up all the cyano you can in the tank. Put the cyano in another container and be sure to properly kill it before disposing of it (if you don't kill it you risk infesting your water with it). In my case I added some bleach in the cyano bucket and waited about half an hour. When I couldn't see any green left in the bucket I simply disposed of it. Doing this took me about 15min of active time and 30-45min of passive time (doing something else while the bleach was working). In ideal condition, you would repeat the process each day until you don't have any left. For me I couldn't do it every day so it was each 2-3day but it still worked pretty good. After about two week of using this process I don't have any patch of cyano left in my tank and every thing is back to normal.

Every thing used to remove the cyano must not go back near your kitchen. Cyanobacteria is dangerous to you if ingested.

Not the answer you're looking for? Browse other questions tagged aquarium diseases or ask your own question.

8
What is a "sump" when talking about aquariums?
7
What is the basic proper aquarium setup for a turtle?
2
What are reasons for the nitrite (NO₂-) peak during aquarium installation/start phase?
2
Fungus blocking fish from eliminating
4
What is this tufty white spot on my goldfish's head?
4
What could be the impact of unwashed aquarium sand?
3
What aquarium plant is this?
5
What is special about an aquarium using no carbon dioxide, no fertilizer and no filter?
2
What is the prognosis for feline leprosy, and why is so little known about it?