What can I do when the cone of shame is too heavy?

Our puppy Dachshund had an Ovarihysterectomy performed on Monday (she was spayed). She has a small (approximately 2 inch) sutured scar on her belly. She was given a cone to wear and we were asked to keep it on for two weeks(!).

While the cone (technically) fits, it's actually too heavy for her. She has trouble walking, because in order to do so, she has to keep her head up high and it's stressing her neck. Also, being a hound, she is used to walking with her nose to the ground, which is now impossible.

Would it really be necessary to keep it on her for a full two weeks? I don't dare let her bite at her belly, not yet anyway, because she'd probably open the wound, but how long should it take for the major portion of the scar to close?

Two weeks seems like a long time, but that's actually how long it takes to heal. Actually, it's technically a bit longer, because they take the stitches out before it's fully healed so that the body doesn't begin to react to the stitches.

By my estimate, you will probably notice after the first week that it looks healed. But I would still caution you to be careful about letter your dog loose one it, as it will only be (for the lack of a better term) thinly healed.

As an alternative to the hard plastic cone I'm assuming that you have right now. There are also cones made of nylon that should be just as effective, and more importantly, much lighter and less irritating. If you can't find them in the dog section at your local pet store, you might want to check the cat section.

They also make collars, which are pretty much the same things as those neck pillows you get for plane rides. They work by restricting the mobility of the neck, so they shouldn't be able to reach much. I wouldn't count on them if the spot you're trying to avoid is on the hind legs though. I would also assume that they're going to be too heavy for your dog, though you would be able to judge that if you found one and held it. 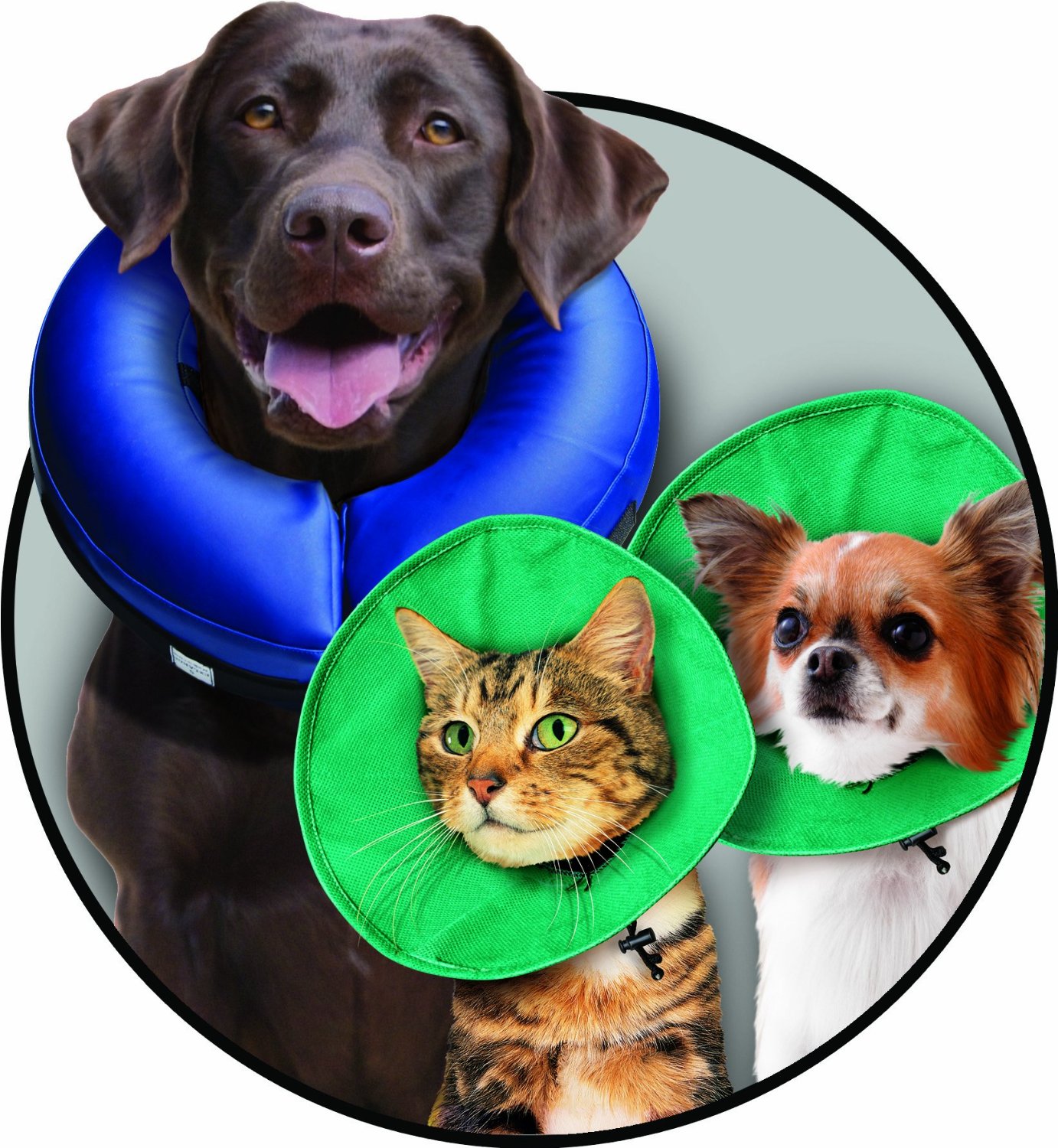 When our dog was spayed, our vet recommended using a baby / toddler onsie. We picked one up from a used clothing store for maybe $3 and it worked great. Just make sure to take it off before they go to the bathroom.

We ended up shopping at Petsmart and bought a Remedy+Recovery brand E-Collar, medium, pink. My wife bought it, so I don't know how much it cost. It was way better for Peanut than the large hard plastic white cone that was both too large and too heavy.

The E-Collar fit just right, and came to the end of her snout. After a couple days with it, she was actually happier with it on than when we took it off for a thorough scratching. She was able to lick her hind paws but not get to her stomach where the wound was.

Peanut is now healed enough for no cone, though, so she's free to sniff about.

Not the answer you're looking for? Browse other questions tagged dogs desexing surgery or ask your own question.

1
Alternatives to cones?
12
How can I stop my cat from removing her cone?
4
Rabbit is losing hair on the nose and skin is getting crusty

7
What is the benefit of an ovarian-sparing spay?
6
Why does my dog rub her chin on stuff?
12
How can I stop my cat from removing her cone?
3
My boyfriend's dog hates me, help please! Warning! Long post
2
How do I get my husky mix puppy to want to train?
2
What are the benefits to cropping dog ears?
4
How To House Break a Stubborn Rescue
2
When can I remove my dog's bandage?
3
New rescue dog follows me everywhere, but seems terrified of me