You may be familiar with the rabbit from Alice's Adventures in Wonderland as illustrated by John Tenniel. 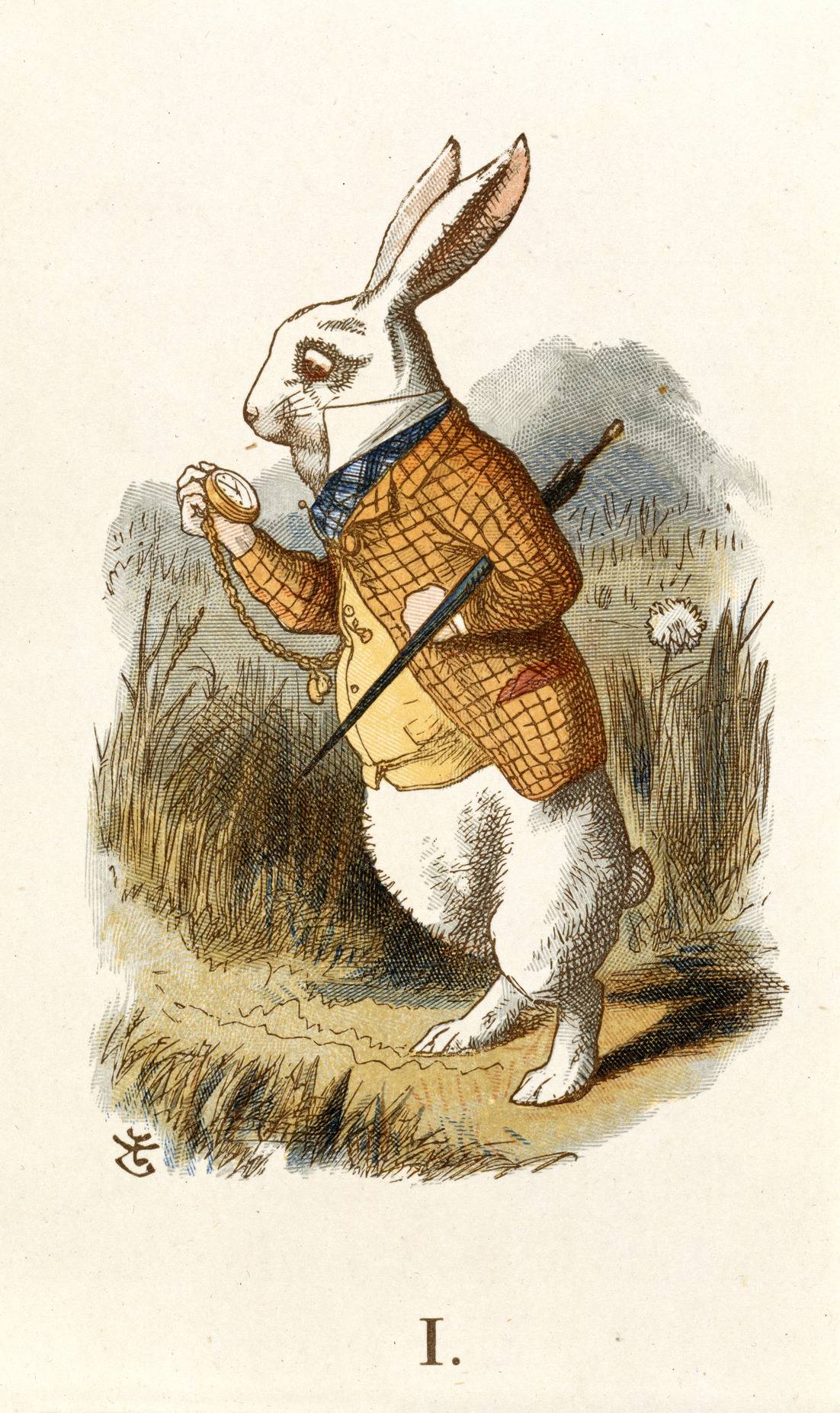 But my rabbit does not have a pocket watch, yet she often manages to get up on the bed minutes before the alarm goes off. The only clock in the room is a digital alarm, that it is not possible to see unless you are on the bed, so I can't see her checking it through the night without waking me up. I have heard from a few others who share a bedroom with a rabbit that it is not unusual for them to be up on the bed shortly before the alarm goes off, for some snuggles.

Unlike cats and dogs, rabbits seem to prefer something solid under them when sleeping, so they generally move to the floor for the night. Maybe once a month or so she will wake up in the middle of the night and get up on the bed, grabs a quick snuggle and back to the floor, but usually she waits until 5 to 15 minutes before the alarm goes off.

How do Rabbits tell time?

I don't think the science is conclusive on this, although there are certainly studies being done. As one example, some scientists claim that rats can tell how much time has passed.

As I understand it, there are two main schools of thought on this subject:

There's probably some truth to both, although I personally tend to lean towards the "environmental cues" camp as a practical matter.

This is a really good question, but I don't really think that rabbits can tell time. Rabbits get used to a routine, and they follow that routine. I get up at 5:00 a.m. Monday-Friday, and my rabbit is up banging her dish around. When I first got my rabbit, even over the weekends when I slept in she was up at 5:00 banging her dish. I believe she eventually got used to the fact that there are two days where I sleep in at least until 9. Now, Monday- Friday, she bangs her dish at 5, and Saturday and Sunday she bangs her dish at 9. I think its all just a routine for them, that they get used to, and want to follow.

It has been several months since I noticed this behavior and posted the question. The following are my observations and assumptions based on those observations.

The 5 or 10 minute before the alarm behavior continued fairly dependably until there was change in people living next door, there was an earlier riser there who is now gone. I believe my rabbit (Ruby) was picking up sound cues from the neighbors. Both houses are 1950's single family, detached with brick exterior, separated by 15+ feet (so if this is the case rabbits can hear very well).

It has been a few months since the earlier riser moved from next door. Ruby still usually gets up in the morning and on the bed before the alarm goes off, but I have noticed she always eats hay before coming for her snuggles, so I suspect that without outside queues it is hunger that wakes her up in the morning. Times can vary widely.

In summary, exact time keeping is probably related to outside sounds or events beyond our ability to perceive. Approximate time keeping in rabbits is similar to ours, regular intervals of hunger, bathroom calls, and having slept x number of hours.

Our bunny, Rocky, has made himself a very predictable morning and evening routine, unlike ourselves. We wake up, go to sleep, eat, leave the house, return to the house at varying hours. He lives with us in a loft-type house, and pretty much is free to run around as long as someone is home to watch over him. Even if he can run around free pretty much for about 6 hours in the evening, he mostly stays in his 'cage' (which is a double stage pen, giving him a good view over the loft). However we have noticed perfectly timed behaviour that happens every single evening, even though we disrupt his routines before that.

Every evening, at 10PM ±5 minutes, he will go drink from his bowl (he loves to drink big amounts in once), and right after he goes to pee on his toilet. After that he will jump on our bed to make scrapes there. He will jump around on and off the bed until one of us comes to take him to put him next to us on the sofa. From then on he will stay with us for another hour or so, getting pettings on the head, or laying in close proximity to us.

He has many more routines, but this is most noticable to us, because it is timed without us triggering any behaviour.

Not the answer you're looking for? Browse other questions tagged rabbits psychology or ask your own question.

8
My rabbit is hyperventilating and can't get comfortable. What is wrong with her?
7
Pet sidecar for an office chair?
7
Why can't my rabbit lift it's head?
4
How smart are rabbits?
3
Is my rabbit potentially sick and I need to see a vet?
4
Dog keeps hyperventilating
2
Can a wild female rabbit be spayed?
1
My dog will not stop going potty in the house and will not rest at night