We changed our privacy policy. Read more.
This site is currently in read-only mode; we'll return with full functionality soon. Follow @StackStatus or visit our status blog for more info.

What would I need in order to breed superworms?

I know superworms are the larval stage of a darkwing beetle. So if I were to purchase a container of superworms from the pet store. How would I go about starting a colony of my own superworms?

Breeding superworms is relatively easy but nevertheless takes time and patience. Superworms have 4 stages of life: eggs, larva, pupa, then beetle. The insect will only reproduce when it's a beetle. It's recommended you start with at least 100 superworms.

Superworms need to be stressed in order to pupate. Light is not important for this process, so you might as well store them anywhere. The temperatures are optimal when between 70-85F. Each larvae needs to be stored alone, you can use practically any container as long as it has smooth sides that are hard to climb and allow appropriate air circulation. If the larva are big enough then they need not be stored with food, otherwise, if they're small many will die before pupating. Storing them with food prolongs the time taken to pupate. Black or still individuals are most probably dead, the larva will begin to curl up as shown below and will eventually turn into a white alien like creature. You can expect this process to take a few weeks. 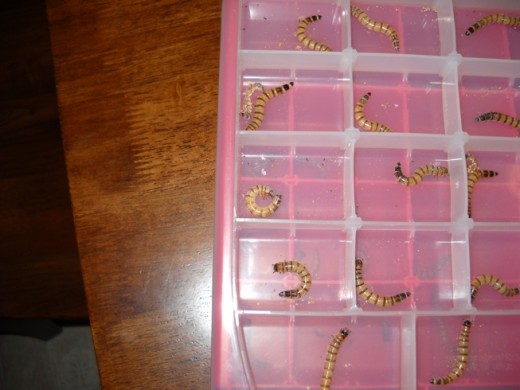 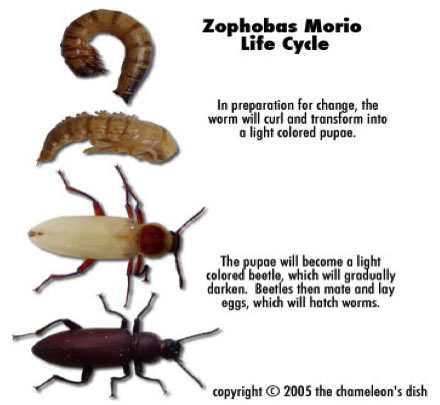 After one or two weeks, the pupae should be becoming darker and thus turn into a beetle. You should remove your beetles and place them in a separate container with a food source such as oats and any moisture source they can't drown in. The bottom of the container should be screened so that the hatched larvae can go down before getting eaten by the beetles. The beetles should be given a place to gather at other than the oats so that they don't start eating the eggs. Another container with more more oats( between 1-3 inches) should be placed under the beetle container, the hatched larva will fall there. The larvae will then get gut loaded and some fed to your insectivores, while some will live to continue the breeding process. A female darkwing beetle can live up to four months and lay up to 500 eggs.

Other than that the only thing left to do really is maintenance, the moisture source and oats should be replaced when needed, and dead insects and worms should be looked for and thrown away. Good luck!

And as always, here are a few sites for extra reading:

This site is temporarily in read only mode and not accepting new answers.

Not the answer you're looking for? Browse other questions tagged breeding insects .

11
What is the difference between a "reputable breeder" and a "pet mill?"
7
When will mantis eggsacks hatch if kept at room temperature?
21
Can I use a gecko to get rid of a cockroach infestation?
11
What are the signs that a female platy fish is about to give birth?
8
My turtle is pregnant what do I do?
1
Caterpillar stopped eating
5
Should I get fish from different stores if they might breed?