Is she trying to talk?

My rabbit loves being around people, and her favorite thing to do is surprisingly be held. Whenever I hold her though, I notice that she opens and closes her mouth frequently. I sometimes feel like she believes that she is a human. Is she trying to communicate, and talk like a human whenever she does this?

It is possible that your rabbit is mimicking you, but doubtful she is trying to communicate by talking.

Rabbits do learn by watching others, and mimic that behavior. In the photo below the black rabbit (Harmony) spent about 2 months learning to climb to the top of the rabbit condo, one success at time, starting with stretching from the arm of the couch to grab a loose piece of hay. Harmony did this on her own, in an effort to get to the hay from the top, rather than pulling it through the wire. The white rabbit (Lyra) joined the family a few months after Harmony had mastered the skill of condo climbing. Lyra watched Harmony a couple of times, and when she was ready, she accent to the top easily.

NOTE: Getting up is one thing, get down another, in the end we had to rearrange things so they could not climb up. I would not recommend any configuration that does not allow for large (18 inches or 1/2 a meter) landing for every 12 to 18 inch raise. 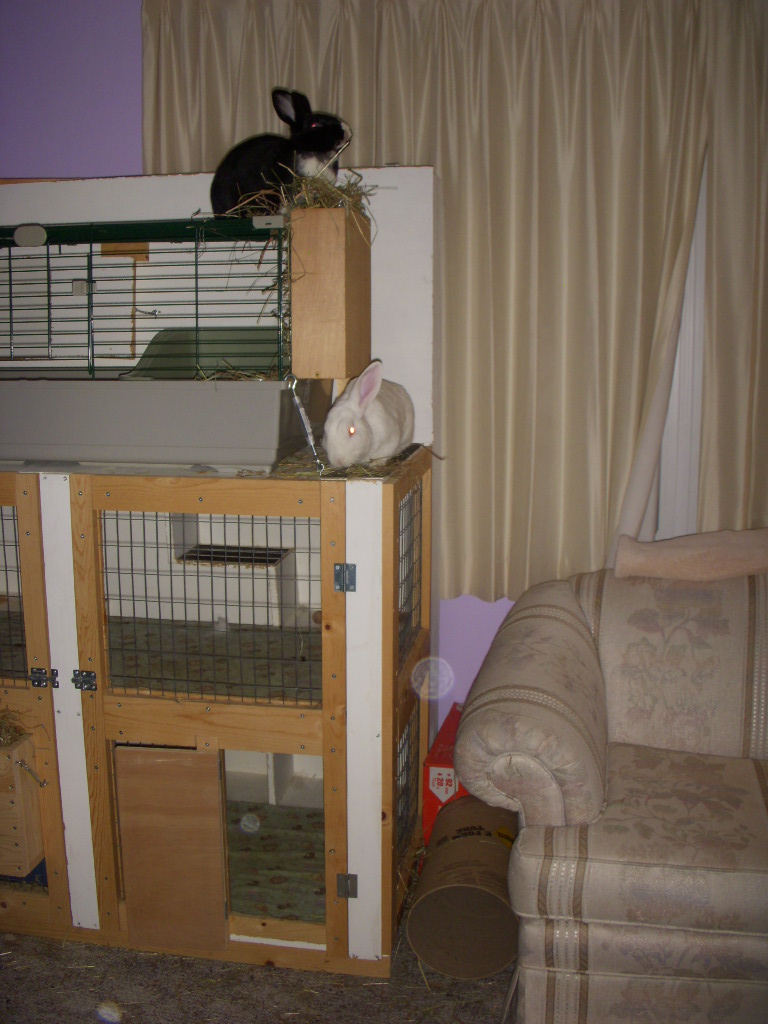 Rabbits do communicate vocally but most communication is non verbal for instance when your rabbit is mad at you, she thumps, and runs off. Some rabbits will also growl or grunt, for moderate displeasure. On the happy side you may hear teeth chattering or clicking to express great pleasure (similar to a cats purr).

Other then the extremes noted above, most of the middle range daily communications are non-verbal, nose nudging (pet me), nipping (I SAID PET ME NOW!), bunny hops (I am so happy), etc.

If you speak to your rabbit while petting her, she may associate your mouth moving with getting pets, and may be reflecting that. For the most part rabbits expect you to learn their language. After all they are the boss of you. In multiple species households (cats, dogs & rabbits) the rabbit tends to be the dominate creature. The same applies to rabbits and people, the happiest rabbits live in households where they are boss of the relationship, though they do very well at learning boundaries (i.e. don't chew that, but this is ok).

Not the answer you're looking for? Browse other questions tagged rabbits communication or ask your own question.

17
How hard will it be to train my parrot to talk?
8
My rabbit is hyperventilating and can't get comfortable. What is wrong with her?
3
What would cause a rabbit to suddenly become reckless?
7
Why can't my rabbit lift it's head?
2
Is it okay to talk to a dog?
5
Rabbit is losing hair on the nose and skin is getting crusty
2
Seemingly crying cat sound, yet she continues friendly rubbing on me
2
Fact or fiction - have I ruined the chance to teach my cockatiel to talk?
3
Why is my cat bothered by my being in the bathroom?
4
Wild bunny - is she nursing or sick?