How can I help my betta who is laying at the bottom of his tank?

My kids saw the "My Fun Fish Tank" on TV. 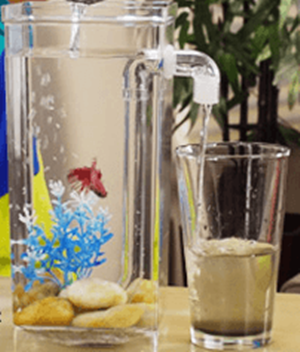 (Not mine, but an example of what the tank looks like)

I got it for them and after I put it together I went to the pet store and got a male betta. I change the water every 2 days with distilled water, and we feed him like the instructions that came with the tank told us to, but I'm worried that the fish doesn't have enough oxygen because he doesn't move very much, he stays at the bottom like he's gotten stuck under the rocks.

Why is my betta acting like this, and what can I do to make him better?

A couple of things to look at are tank size, temperature, and location.

If that's actually the size of tank, its too small. While they do 'rest' a lot, bettas are actually fairly active fish. Watch them sometime in a big planted tank. They are very curious creatures, and like to explore and peck around for something to eat and/or chase. In a small tank like that movement is restricted - especially laterally. There's just no place for him to go.

Also, a cold betta is less active. If the temperature of the water is below 76-78-ish, bettas will slow down and become less active. So you may need a heater. But, that bowl may be too small for even the smallest paddle heater. Pet shops sell small thermometers that can attach to the side of the bowl to help you monitor that.

The other thing to consider is boredom. Bettas are, by fish standards, pretty intelligent. If the betta is stuck over in a corner or in another room away from the action... he's going to get bored. They like stimulus. Move them someplace where's there's some activity. This way there's some big splotches of colors moving around them to stir them up occasionally.

Also, last issue - do not use distilled water. That is very different from the water they are used to. You might use bottled spring water (not purified water). But I've seen little difference in how bettas react to spring water and plain (dechlorinated) tap water. But, every area is different so it really depends on what your local water is like.

My personal recommendation for a happy betta... I would not keep a Betta in anything less than 1 full gallon. Generally the bigger the better, but I have had some that had trouble adapting to bigger tanks after living in a cup for their entire life. I keep mine in 5 gal tanks with small in-tank filters & heaters, plants, and in the center of the house so that there's always a lot of movement for them to watch. Partial water change every week (I just scoop some water out and replace it). They are very active fish... sometimes a bit too active (mine will sometimes jump at me as I walk by, so I never fill the water to the top. Many a betta has found their end by jumping out of their own bowl).

Unless you are remineralising your distilled water, you will have a very unstable pH, which may well be the cause of the problems you are seeing. Distilled water does not have the minerals necessary to buffer pH.

How much water are you changing? You should do regular partial water changes, complete water changes can be stressful for fish. Because of the tank size, I would recommend doing regular and large water changes (but not full), perhaps 50% daily.

The tank is too small, a betta should really be in a 20L or bigger tank.

You may want to test your water parameters, test kits can be picked up from most pet stores.

When you say, you clean the water every two days, do you mean you pour the water in so that the dirty water goes into the cup? Or are you changing the fishes tank, giving new water?

I actually think you might be changing his water too often. Plus you're using distilled water. Remember, fish come from dirty water usually. You of course want it clean, but by using distilled water you're going above and beyond what's right for him, unintentionally making him sick.

When you bought him did you give him time to adapt to the water? Was the tank and accessories cleaned with warm water, no soap, before dropping in the tank?

I really don't care for the fish tank because he has no oxygen, except for when you pour the water in. They have great little starter fish tanks there small and perfect for bettas, I would invest in one of those. They come with a filter and a plastic ornate tree too.

We had two bettas for over two years never sick, they moved from California to Kansas with us. Bettas are tough.

One thing they did like us to have, was a mirror by their tank, or another betta to look at. They flare up looking at each other or into a mirror. It gives them something they enjoy. So yours could be depressed also.

If your betta is lying at the bottom of the tank, are his fins clamped? This indicates some illness.

The tank is way too small. Keeping any fish in a cramped space is not proper. A small tank has less buffer for water parameter changes. Bettas are tropical, so a tropical range of temperatures is required.

Also, remember that in an understocked tank, water changes should not be this frequent. Fishes like the betta, which generally thrive in paddy and rice fields, are used to water with a higher general hardness a.k.a gH. You can achieve this by not using distilled water, or by dissolving just a single rice grain sized rock salt crystal, in a glass of de-chlorinated water, and then adding it to the tank water.

Use some substrate, like some small pebbles or some rocks to give a chance for the beneficial bacteria to colonize your tank.

Also remember to never change the water completely. Always perform a PWC, or a partial water change, of up to 20% only.

He could have bladder swim disease. He may have a bloated stomach if you look close. It common if you purchased out of pet store. The cups they come in are not heated and they do not have space to exercise. If they are too cold and do not have space to move they stay at rest. This causes them to eat more then they burn off. You can try not feeding him for three days and then feeding a quarter of a boiled frozen pea. Also, you can buy a seven dollar water heater. If he is warm he is more likely to move around.

He could just want to lie down. The do like to rest. Get him a betta bed. Mine love them. You put it near the surface of the water so they can lie down just under the water. I have a leaf one.

ElizabethElizabeth
711 bronze badge
Add a comment  |
-2
Want to improve this post? Provide detailed answers to this question, including citations and an explanation of why your answer is correct. Answers without enough detail may be edited or deleted.

Use spring water it’s what betta live in in their natural habitat if you use another kind of water your fish could die. if you do you can use the conditioner to treat it

10
How can I help my betta, who has a white-ish sore on his side, is laying at the bottom of the tank, and isn't eating?