How can I prevent my mouse from escaping the cage?

My mouse found a way to get out by using her head and body to force the bars further apart and then escape through the gap. She has been doing this for the past two days.

How do I make her stop or not let her get out?

She can get out fairly easily now and she does it at night, forcing me to wake up at 6 a.m. and ask questions like these on Stack Exchange.

Mice are known to be capable of getting through 1/4 inch wide gaps. You will have to change your cage to something more escape-proof. Without knowing what your cage looks like, I must assume your cage only has vertical bars. You have 2 options:

I think you've got a few options here. One is like JoshDM suggested and get a 10gal glass fish tank. You can get a wire lid if there is anything she can stand on to get out. However, I wouldn't add much to it if it's just a temp cage till you find a better solution.

Another temporary solution that may or may not work, depending on how determined your mouse is, is to buy hardware cloth or metal porch screening at a hardware store. The hardware cloth is metal screening and the gaps come in various sizes. The issues with either of these are that they don't look good and if you just cut a 4-inch strip and ran it around the bottom perimeter of the wire cage, then it would block her, but she might be able to climb above it and squeeze through higher up.

An option that would look better and be more functional is if you were to get one of the plastic cages with all the tunnels and towers and stuff. Not only would she have a lot of things to play with, but it looks good too. Downsides with are that a lot of people think the air flow isn't good enough. Also, they do chew and scratch on them, so they do start to look worse over time. I never had an issue with my hamster in one and I even had it rigged so she could get in a wire cage and she spent as much time in one as the other.

A last option is building one yourself. This will be more expensive, but you could end up liking it much better. Below is one example of many different 'homemade hamster cages', which is what I put in google to find all the pictures. 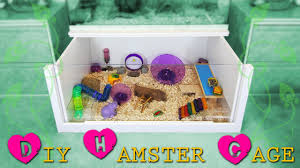 I chose that one because I know there is an instructional video I watched on youtube.com for how to make it. You can have a nice, clear acrylic front and you can have a completely open top. You can also screen any combination of the top and sides to allow breath ability. It's just what's in your imagination. You can make a super artistic cage that looks like professional furniture if you want.

I don't have any idea of when I'll get another hamster/mouse/gerbil, but when I do, I'm going to build my take on a cage I once saw. It was roughly 2'x4'x5'. It had several levels with tubing so the animal can go between each level. I want to make each level easily removable for easy cleaning. I'll also have slots with screen for ventilation and to make sure the ventilation is good, I'll wire up a small computer fan to push air to each level. I will have light on each level and a different set up. For instance, one level is a feeding level, one level has toys, each level has water, etc... I even want to the top level to have dirt and real grass, though I don't know how long I'll want to clip grass with scissors if they don't eat it down. I'll also have a sand pit for them to roll in. It's just some ideas of what you can do. For now, you could get a Rubbermaid container pretty cheap and drill a bunch of 1/4" or slightly smaller holes up near the top. You could even leave the top off, but it needs to be fairly tall, as mice can jump well. You don't want the holes low as they will bore them out and escape through them. It'll be a good temporary home. You can get a clear-ish one, and since you can get a large one cheaply, there should be plenty of air volume to make ammonia a non-issue till you get a solid cage built.

18
How much space does a hamster need in its cage?
6
How can I help my rabbit be more comfortable with my influence on her cage?
7
What are the benefits and risks of a wire bottom cage for my pet rabbit?
1
My baby mice is getting out of her wired cage what shall I do?
4
Should I get a larger cage for my two dwarf hamsters? How large?
3
How big does my robo hamster cage have to be?
3
How to put rabbit in cage without scratching me?
4
Can I leave my gerbils' sand bath in their cage all the time?