How can I keep my cats safe in my car?

When transporting one cat I put the carrier on the passenger seat (with the front grill facing me). When transporting both, somebody gets the back seat (with the carrier similarly facing the center of the car). I never gave this much thought until reading a news article about an auto accident that mentioned, in passing, that two cats had died (no further details). That got me wondering about safe transport.

Carriers, being not people-shaped, don't interact well with the seatbelts in my car. Should I be doing something to "belt in" the carriers, and if so what? Or should I be thinking of doing something to the carriers themselves (what?) to reduce damage to the cat if a carrier were to go flying? Would the passenger airbag deploying be a good thing or a bad thing? Would everybody be better off if I put the carriers in the hatchback of my Honda Fit instead of on seats?

When transporting cats in carriers, I always put the crates in the back seat of the car and run the seat belt through the handle on the top and around the side of the crate. Like with children, the back seat is safest for cats and other pets, not only physically in event of a crash, but also limiting distraction to the driver (as when I have the crate in the front seat I often look over and talk to my cat).

I would think that the airbag deploying on a crate wouldn't be a good thing since it deploys with enough force to break bones in a human, and could potentially crush the crate. Putting the crates on in the hatchback wouldn't be optimal, since the crates could slide around and tumble in event of a crash since they aren't secured by anything. Belting the crates with the seat-belt as explained above would be the best bet to reduce the risk to your furry friends. 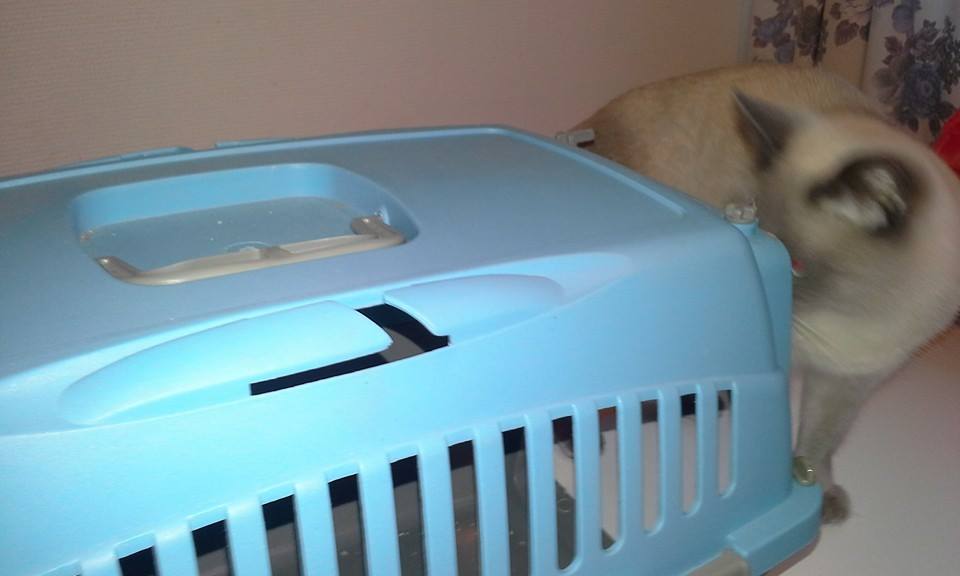 Many dog and cat carriers have a slot for seatbelt on both sides of carrier topside.

Even when the cage is secured to the car, the cat is not secured inside the cage.

This means that even though the crate will not move (in relation to the car) the cat will still hit the inside of the crate in the event of an accident. For a similar reason, this is how whiplash is caused in people, where the body is secure but the head is not.

I don't think that there is a great solution to this problem, cars are designed (as you mention) for the safety of people in mind.

Keeping the size of the crate as close a fit as possible to the cat's size will help.

Not the answer you're looking for? Browse other questions tagged cats safety travel or ask your own question.

7
How should I transport dogs across the country?
7
What is the safest position for a pet carrier in a car?

16
What's a suitable way to drive with a big dog in the car?
18
What strategy to undertake for a long car trip with my dog?
6
How can I safely transport a chinchilla on a 15 hour car ride?
8
Is it safe to take a small (such as a Robo or Chinese) hamster in airplane, or can they "explode"?
7
What is the safest position for a pet carrier in a car?
6
Transport a cockatiel locally in car ride
4
Safe paint for cats?
5
How to treat car anxiety in dog?
2
Can I keep my cat in his Thundershirt for a 5-6 hour car trip?
7
How can I keep our cats from endangering my pregnant wife?