Why does my dog sing along to Final Jeopardy?

I have had multiple scenarios where dogs I've owned or watched would consistently howl or sing at very specific things, and nothing else.

Whenever we babysat our friend's black-and-tan dachshund and watched Jeopardy, he would howl at the song used during Final Jeopardy. Not the intro. Not any of the outtakes of the song, but only when the song played during the part where everyone writes down their final answer. He didn't even have to see the television screen to know to howl. He just did it. I have no video of this particular dog, and he has since passed, but apparently there are many videos of dogs on YouTube howling to Final Jeopardy.

At no point in these videos is any of these dogs rewarded for their behavior. We never rewarded the dog we babysat for howling.

If our phone rang in the house and the answering machine picked up, once people started speaking to leave a message, both male dachshunds would howl and sing. They would not do this on playback. They also would not do this if the call came from inside the house.

While I found it adorable, I did not reward them for this behavior; I do not understand why they reacted like this every single time. Of note, I think one dog howled and the other joined in, as one has since passed and the other doesn't do it anymore.

I never rewarded our dogs for this behavior.

Why do these dogs choose to howl at these very particular scenarios and only at those times and so consistently? Are there specific tones in these sounds that might have enticed them to howl?

It is likely that your dog got lots of attention and maybe even praise the first time it did this. If it did it again and you showed your family members what happened, they also paid the dog more attention, thereby rewarding the behaviour until your dog learned to perform it every time.

Skinner's pigeons are a great example of the type of behaviours animals learn in response to a reward mechanism they can't figure out. 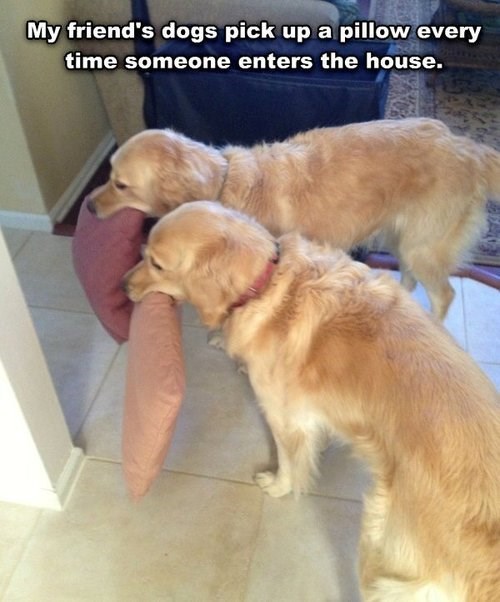 *The most effective way to train a behaviour is through intermittent reinforcement, i.e. rewarding unpredictably but often enough (think slot machine) rather than all the time (think snack machine).

My dog is a very disobedient 3-month-old puppy. He howls at the Jeopardy song at a certain spot every time, while completely ignoring almost all other television sounds. I have not rewarded the behavior ever and, in fact, she did it spontaneously on her own the very first time she heard it, when I wasn't even in the room. She does it every time the final clue comes on when it gets towards the end of the song, except strangely she won't do it again when I replay it right away and try to "make" her perform by rewarding her, perhaps because she has registered that it is not real after hearing it repeated.

I cannot buy the idea that this is a learned behaviour, seeing as I can't even "train" her to do it. I also found similar cases on YouTube of dogs howling at the exact same moment, also to the owners' bafflement and not related to any enticement on their part. This is clearly something instinctual, perhaps to do with the tone, which triggers the dog to respond in this way.

Perhaps the song sounds like a dog howling in the distance to them? Seeing as dogs are also social and they communicate via howls, barks, growls and the like with one another, I would think this is a likely explanation.

Singing is a social activity that isn't restricted to humans. Wolves howl in chorus, recognizably harmonizing with each other. (If two wolves land on the same note, one or the other will shift.)

Dogs are domesticated descendents of wolves; some howl, some like howling in chorus, and some will harmonize with human singers or with music. Their sense of rhythm may not be great, and the chords that sound right to them aren't always the ones we would have chosen, but there's a very long history of dogs performing well enough to be on stage as novelty acts.

So the pooches in question may just have decided this was amusing on their own. Or they may have done it on impulse once, noticed that it made hunans happy, and learned to do it reliably -- training, though unintentional. Or they may have been actively encouraged, especially in the cited YouTube vids.

Not the answer you're looking for? Browse other questions tagged dogs behavior sound or ask your own question.

20
Negative reinforcement: how to replace an object?
3
Why do dogs howl?

12
Why does my dog howl at airplanes?
11
Why does my dog prostrate (stretch)?
6
How do I identify my alpha dog, or do I even have one?
6
How do I help my dog adjust after moving?
7
Fence aggression - guard dog or poorly trained dog?
4
New roommate's dog tried to bite me. How do I establish that I now belong there?
4
How to deal with a "hell hound"?
38
How can we find a dog to "test drive"?
1
What was my dog trying to communicate with this part-howl while meeting new people on a walk?