A cat with broken leg: What would have happened if left unattended?

In recent posts, I talked about how my cat had a broken leg:

The cat's shin bones were shattered. The cat definitely couldn't use the leg -- it hung loosely as he walked on his other three legs.

As a hypothetical question, I'm wondering what would have happened if the cat was left as is -- with the bone broken/unusable.

Assuming that the cat's food/shelter needs were met:

Would the bones have tried to heal themselves? Or would the leg have become atrophied? Or something else?

I only ask as a hypothetical question.

Of course, no one would do this intentionally. I'm just wondering what would happen in a scenario where a cat with a broken leg was not given medical attention by humans (would be very unfortunate).

If it's a clean fracture and the cat has sufficient time and nutrition to heal, it will just heal.

If the cat is malnourished it will take longer to heal and the fractured bone hinders the cat even more in its search for food, possibly leading to starvation.

If the bone isn't aligned or is disturbed during the healing process, the mended bone can become thick and uneven. It happens because the cells at the fracture site that grow new bone tissue don't magically know where the other end of the fracture is waiting to be mended, so they have to grow bone tissue in all directions until they finally find another bone to grow to or just stop growing after a while. In most cases this doesn't disturb the cat too much, but it can hinder movement if it grows in the way of muscles, nerves and tendons.

An adverse effect of a complicated fracture many people overlook is internal bleeding. If a bone is splitered into several pieces, each splinter has a sharp point that moves around and cuts blood vessels. In the worst case the cat could die from internal bleeding, sepsis or the consequences of anemia. (As a matter of fact, soldiers died of bone fractures as late as WWI, partly due to the new weapons like mortars that caused severely fragmented fractures.)

In addition to that, a complicated and splintered fracture has little to no chance of ever healing again without invasive medical care (screwing the fragments together until they had a chance to heal). There is simply no way a cat can sit or lay down and stand up again without aggravating the fracture.

The outcome of an untreated fracture does largely depend on the nature of the fracture. There are many factors at play, including whether the fracture is open or closed, the stability on the fracture, and whether the leg is rested.

A simple, stable fracture can often heal uneventfully without surgery. Splinting can be helpful in some cases. Pain management and strict rest may be all that is necessary.

A more complex fracture, where there is an open wound, severe instability, multiple bone fragments, or (as in your cat's case) foreign material such as bullet fragments in the fracture site - these are not likely to heal on their own. A fracture with an open wound or bone exposed to the outside will be very susceptible to infection, which could be life-threatening. In the event the fracture does heal on its own over time, the leg will likely have chronic pain and be susceptible to arthritis. Muscle atrophy is a possible outcome also.

I did see a recent case which I think is quite relevant here. This is a young cat who fell off a third floor balcony, not once but twice over the course of a couple months. After the initial fall, he was limping but this seemed to resolve fairly quickly so the owner never brought him into a vet. A few months later, he had another fall, but did not seem to be getting better as quickly, and this is when I saw him. It was over a week after the second fall that he was brought in to me. These were his x-rays: 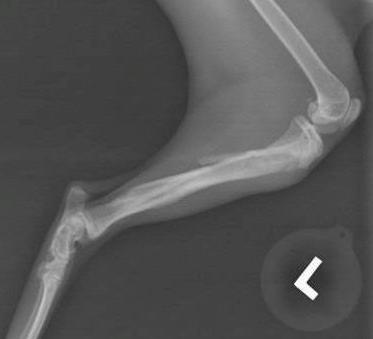 Similarly to your cat, this cat had fractures of his tibia and fibula. There are two primary fractures on the tibia. The more distal (lower) fracture shows some periosteal proliferation and callus formation, which is what happens when the body tries to heal a fracture. This is the hazy area between the fracture segments. I suspect that this is the original fracture from a couple months ago. The more proximal fracture appears more recent with no callus formation.

On his exam, the fracture did appear very stable, meaning I was unable to move the individual fracture fragments much. The cat was partially weight-bearing by this point.

I sent this cat to an orthopaedic surgeon for a second opinion and they advised to hold off on surgery for this cat, as the fractures were stable and minimally displaced. Although the x-ray looks terrible, with rest and pain management we are hopeful that this one will heal on its own. Time will tell, hoping to have a progress check on this cat in a few weeks.

In human medicine, if you don't treat a broken bone, it might end healing on its own, albeit slower and more painfully, or it might never heal at all, the broken bones will continue to cause pain, and the limb will never be usable, at least as long as it continues to be untreated. It's also possible that even if the person chose to only delay treatment, that more damage will be caused by the delay, such that there's a higher likelihood of permanent disability.

I imagine with animals, the answer is probably much the same, and in this particular case, since you ended up having to amputate the cat's leg, I'm going to guess the chances of its healing on its own were probably pretty low. Cats are normally very good at healing broken bones, so the break must have been very severe.

Not the answer you're looking for? Browse other questions tagged cats injury or ask your own question.

4
If a cat tries claiming dominance over its mother, should I stop it?
7
20 year old cat litterbox issue
5
Is it safe to feed my cat freshly caught raw fish with bones?
7
Is not allowing your cat to hunt ok?
4
How to tell if a cat is abandoned?
5
What might be a typical stomach ulcer healing process and timeline?
2
Limping cat - bone tumor?
2
Senior Cat limping on hind leg (putting weight on it) sudden onset 3 days ago - see vet or wait? Possible causes? No signs of abnormality
10
Do cats walk on their tiptoes?