What are some of the best materials that can be used to safely bite-proof the squeakers in fabric dog toys?

Our medium-small dog is obsessed with killing squeaker plushy toys by biting into the squeaker. I can buy replacement squeakers to sew back into the toys or buy new toys, both very cheap options, but I'd like to see if it's possible to wrap the squeaker components in some kind of bite-resistant material and re-insert them into the toy. I've tried plastic durable toys, but he doesn't seem to enjoy them as much.

Based on animal studies, KEVLAR® is nontoxic when eaten. - source

Seems to be used in bite-proof dog products.

Without being able to reference any objective, scientific sources, I would propose wrapping the squeaker in several layers of fabric.

Kevlar is certainly extremely resistant to cuts and tears, but it does not resist being punctured by things like needles or canine teeth.

Though the two terms are sometimes confused, cut resistance and puncture resistance are definitely not the same thing. The frightening reality is that while it’ll protect you against cuts, a knitted Kevlar® glove offers basically zero protection against punctures. (Source)

Leather, on the other hand, does resist being punctured to a certain extend. So does a Gambeson - a medieval padded cloth armor that was effective and cheap enough to be used for several centuries. A single layer of cloth doesn't offer much resistance to a sword or the teeth of a dog, but many layers of the same fabric are able to withstand much more force and cushion the squishy insides.

Personally, I would look for some fabric scraps - old bedsheets and linens, old shirts or a torn jeans. If you have a leather jacket or bag you'd want to throw away anyways, salvage some of the leather.

Then I'd lay the squeaker on top of the fabric / leather and draw its outline onto it with a few millimeters (or an 8th of an inch) ease around it. Cut 2 identical pieces for 1 layer of "armor", 4 pieces for 2 layers and so on. Cut the pieces at a distance of an additional 1,5 cm or 1/2 inch around the outline and sew as many layers together as you think will protect the squeaker.

Keep in mind that the opening must remain big enough to put the squeaker inside its "armor". I propose first sewing the front where the actual squeaking bit needs to stick through, then inserting the squeaker and sewing the back half shut, like so: 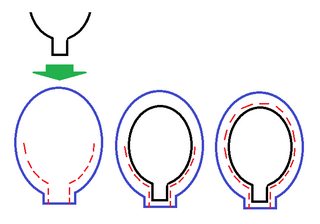 Not the answer you're looking for? Browse other questions tagged dogs safety poison toys or ask your own question.

3
Why does my dog bark when I squeak a tennis ball?

12
What is the best angle for a dog ramp?
15
What are the risks of leaving a dog unattended in the car?
2
Can dogs be allergic to materials that collars are made of?
3
What are some good dog toys for solo play in an apartment?
9
What are the potential risks (to the dog) from having a child ride it like a pony?
4
What, if any, are the risks to a cat that ingests urushiol?
0
What can I put around the doorknob to keep the dog from scratching the door?
2
Toy suggestion for dog that tears apart fabric/rope toys