Why do my Betta fish keep dying?

I got my first Betta fish (name: Dream) back in September of 2020, he was the first pet I've ever owned and it took me a little time to be able to get him a proper home. But after educating myself properly, I got rid of all the artificial stuff in his tank and put in plenty of live plants (that are still doing well today). I truly believed he was thriving because he grew really quickly, had bright colors, and had a very active and fun personality (not even aggressive to the other tankmates).

Until, in March, I noticed he had gotten a disease called dropsy - I noticed this because of the swollen belly, decrease in vibrant color, decrease in movement, and the pine coning of his scales. Dream passed away in the afternoon of the same morning I even noticed what was wrong.

A few weeks later (still March) I decided to put his tank back in use and got another Betta (Name: Neto). Since the water quality was still good when Dream died, I thought it might've just been genetic? I decided to get a more expensive Betta this time in the hopes he would have better health. And again he was doing great, up until a few days ago.

After I came back from a weekend out of the house, I noticed the same thing happening to Neto: pine coning, decrease in energy, etc...

I did some basic treatment that I had lying around, but it didn't help at all. He died only a few hours ago and I have no idea why.

And my other Betta (name: Pearl) that I got back in December isn't doing too great, either. I noticed him laying on the substrate, breathing heavily with faded colors. Even though he wasn't pine coning, I still believed it was also dropsy. (I noticed Neto's and Pearl's situation on the same day, which is why I made that connection.) He's still alive, but even after I finished the basic treatment he's not doing better, now I believe that (because of the no-pine-coning) that he doesn't have dropsy, but maybe something parasitic, so I'll start treatment on that soon.

I just don't know why both Dream and Neto died, and why Pearl might be going too soon. Does anyone have any answers?

I tested the water of both aquariums and they were both near-perfect. 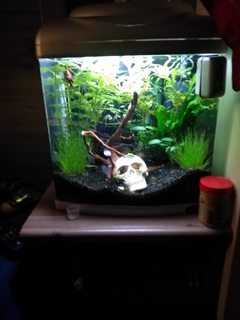 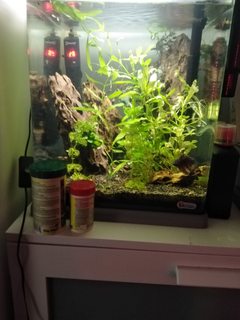 The existing answer gives a good course of action and one of the comments suggesting the source of the fish (i.e. the local fish store) might be a good one to follow up. Some fish stores even offer a guarantee with their fish (if it dies within a week, they'll replace provided your water quality is fine). Consider changing your fish store for bettas if possible.

The last sense-check I'd do would be to make sure you're cleaning your tank regularly (if the water quality is fine, you probably are) and that all your existing tank-mates will play well with a betta. There's nothing in your description that implies you're doing anything wrong. The tanks look big enough (although I'm no expert on stocking-levels in a tropical tank).

Personally, I leave about a month of "mourning time" (or quarantine!) before replacing a fish. Might be I'm just superstitious or very protective of my grief, but I suspect it leaves enough time for any disease to run its course.

Also, just to add a little information, dropsy is usually a symptom of a disease, not actually a disease itself. It's a swelling of the abdomen and I think it is sometimes caused by kidney failure which, in my experience, is usually related to some sort infection which doesn't tend to spread to all the fish in the tank. But there's nothing to say that dropsy couldn't be caused by a tumour or some genetic malformation of a fish as it grows. With dropsy, I've never had a fish last longer than 2 weeks once pine-coning starts, and the one that lasted longest was in and out of a salt bath at the end to keep the pine-coning under control, so I can't say it was a successful treatment. A few days is normal and probably merciful.

Since the water quality is OK (according to your statement), then the only thing remaining is that there is an infection in the tank, affecting only the betta.

In this case, I would suggest to find a specialist (veterinarian?) in your area, to help you with identifying the disease and find a treatment.

An alternative would be to try aquarium-compatible disinfectants, and test them one by one, while you keep replacing the betta's.

Another alternative to the alternative, is to start everything all over: throw away everything, disinfect everything, do not reuse anything from the other aquarium, perform a cycle from scratch. The down side is that the other inhabitants (fish or plants) might carry the disease, and boil-disinfecting them will actually create a soup - which is against your purpose.

Wait at least 30 days before adding any fish after a death. Remove 20% of water weekly for a month then every two weeks, forever. FEED Less. Over feeding is the main cause of bloated death in air breathers. Get a sponge filter. This will add air to water, break the surface tension, and increase filtration. Do not clean but every 3rd month.

Not the answer you're looking for? Browse other questions tagged aquarium fish freshwater betta water-parameters or ask your own question.

5
Do betta fish attack snails?
1
Is my Betta fish dying?
3
Why is my betta hiding?
2
New betta problems - I was unaware of cycling before new tank
0
What happened to my betta fish?