How do I stop my cat from peeing on rugs and linens?

We have two cats who are litter trained, but one of them occasionally pees on rugs or linens instead. According to my fiancée, the cat was accidentally toilet trained on a towel as a kitten, and now she likes to pee on towels and similar things like rugs and blankets. While she did manage to re-train the cat to use litter, the cat will revert to peeing on linens occasionally, especially in times of stress. How can we reinforce the cat’s litter training and discourage peeing on rugs and linens?

Note that we have already removed most of the rugs from the house, so the cat doesn’t have many opportunities to pee on them. However, the bathroom is becoming a problem, as we need towels or rugs on the floor while bathing, and the cat has peed on them twice this week. Strangely, the cat seems to leave the kitchen floor mats alone – I don’t know what’s different about those.

Likewise, we keep the bedroom door shut when we’re not in it, so that the cat can’t pee on the bed. Unfortunately, that’s getting to be a problem too, as the cats will sometimes hide in the bedroom so that we can’t shut them out of it. This all would be much easier if we could just trust the cats not to pee on fabric – especially because the whole house has hard floors, and it’s more comfortable with rugs.

I don’t know whether this is relevant, but the cat has done this right in front of me several times. Unfortunately, I know just enough to recognize when the cat is about to pee but now how to stop it. I grew up with dogs and know how to shoo them before they pee, but it doesn’t seem to faze this cat.

Even though you have good reason to suspect that the problem here is behavioral, the first step should always be a through checkup with your vet. Inappropriate elimination can have several medical causes. Feline interstitial cystitis, in particular, is an inflammation of the bladder walls that is thought to be caused by stress (which can be caused by moving).

In addition, if you believe that the inappropriate elimination is caused by stress (especially a big stress like moving), your vet may be able to give you some medications that will help. Many of these medications can be made into a dermal gel that will get rubbed into their ears, so there's no additional stress to medicate the cat.

Since you believe stress is a factor, I would suggest working to reduce stress in your household. Moving is a VERY stressful time, and cats need consistency! Here are some suggestions:

Finally, you'll have to remove opportunities for inappropriate elimination as much as possible. Make sure you pick up after yourselves. If getting the cats out of the bedroom is a problem, train them (to voice or clicker) to leave the room (it takes us about a year to train a cat to respond to a vocal "out", but we don't use special training sessions, just tell them "out" and pick them up when they don't walk out themselves).

One of our girls will urinate on towels/bath mats if left in the bathroom near her litter box, so we used Ikea Runnen to make a bathmat (ran out of tiles on the right and haven't gotten back to the store). As an added benefit, the litter falls through the gaps so it's neater than a traditional mat, too. 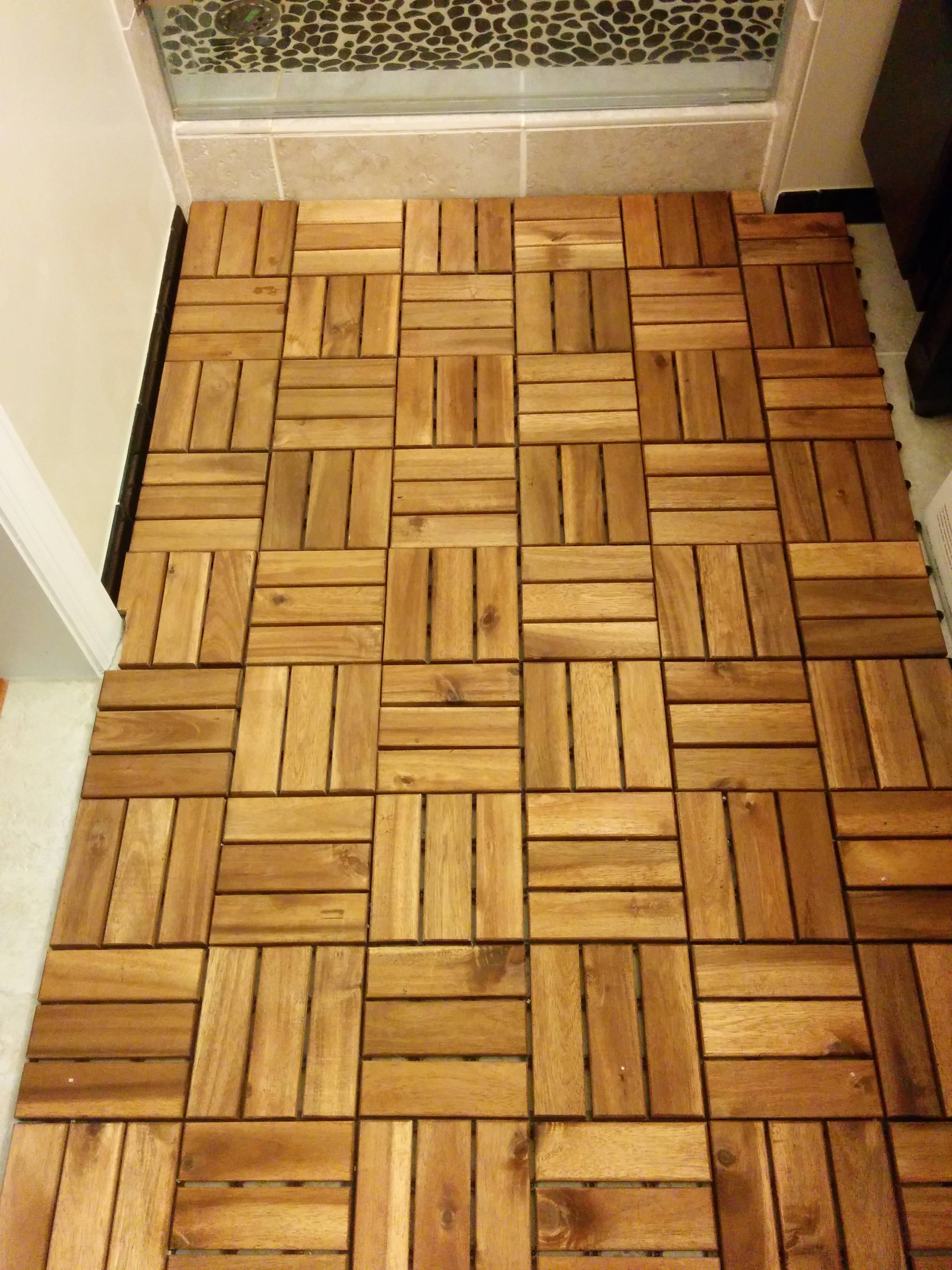 It can be a huge problem and I suspect you can only diminish the frequency of the occurrences.

1) eliminate the smell on the items that have been peed on, on carpet you might be out of luck but on towels, linens, things you can throw in the washer... detergent and "percarbonbate" might remove the odor. Remember that cats have a much keener sense of smell than we do and they will be attracted to pee on a surface they've done that before.

2) give a loud warning if you see "precursor" behavior, stopping to sniff an area especially if you see the "flehmen" (where the mouth is slightly open, they look like they are sneering and they are actually drawing scent into their nose and the VO organ at the top of the mouth

3) reduce opportunities. Closing doors (which you indicate you try to do) is a good way to cut them off at the pass. With the bathmat can you hang it up on the shower rod between uses? If you can't close the bedroom door you could put a sheet of impermeable plastic over the bed (they probably won't want to pee on such a surface but if they do it won't get on the sheets)

4) reduce the stress... moving is very difficult for cats, probably giving them more attention (provided they aren't telling you guys to go away), more food and drink, a bunch of cardboard boxes, extra play time, extra treats.... anything to reduce their stress level

The kitchen mats probably aren't as interesting if they aren't as soft or absorbent. If a cat feels the need to puke or pee out of the litter box they don't want the stuff splashing up at them, so they like a good soft surface that will take it right in.

I've had issues with cats peeing out of place for several reasons:

In general I'd suggest checking for a UI tract infection, but if this is a moving it is most likely stress from the moving.

3
Why does my cat suddenly poop and pee where she is not supposed to?
3
Is my cat pooping on bed stress or dominance
0
My Persian cat pee everywhere at home!
-5
Kitten will not stop urinating on bed after surgery
1
Cat pees on carpet and blankets, how can I stop this?
1
Spayed female cat pees on bed
1
How do I stop my 6 year old cat from pooping outside her litterbox?
1
My cat keeps peeing on my stairs!
0
Cat pees in the same spot. What can I do?
1
Neutered male Maine Coon with me for 8 years has begun peeing on my bed
See more linked questions