I have a fish bowl and they are all swimming with their mouth touching the water surface, almost always. 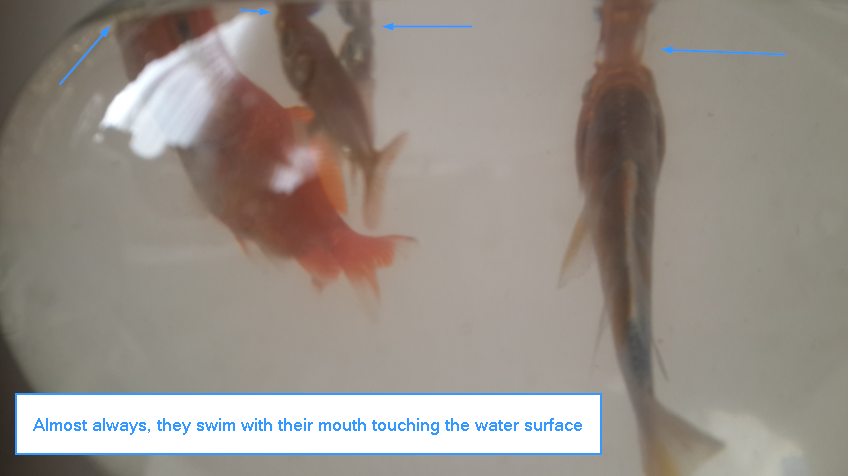 The bowl is a sphere of maybe 1 foot in diameter. There is no filter or pump. No equipment. I change water, more than 50%, each morning. I keep new water overnight inside a separate container, before changing. I feed twice a day, each time maybe 10x grains of fish food.

Fish swimming with their mouth constantly glued to water surface is a sign that they are gasping for breath. However, the reason for them being short for breath usually isn't the low oxygen concentration in the water itself, but toxic effect of water pollutants: ammonia (NH3), which burns fish's gills and disables them from extracting oxygen from the water; and nitrite (NO2-), which binds to hemoglobin in fish's blood, blocks oxygen from being transported to all the tissue, and causes generalized hypoxia.

If the bowl has diameter of around 1 foot, then - considering its shape visible on the photo - it has the volume of less than 10 liters and this is extremely small. In case of goldfish, there should optimally be at least 20 gallons (around 76 liters) of water volume for one goldfish and 10 gallon (around 38 liters) for each additional beyond one. Goldfish are exceptionally dirty and have a high bio-load, which means they require a large amount of water to safely dilute their excreted waste before it gets neutralized by the filtration system.

Having a functional filter in the aquarium is essential, so please install it as soon and possible.

Also, holding water overnight doesn't necessarily make it appropriate for aquarium use because some tap water facilities sanitize it with chloramine instead of chlorine. Chloramine is synthesized in water by treating it with both ammonia and chlorine. Chloramine isn't volatile enough to diffuse out into the air as fast as chlorine and it could take well over a few weeks for it to do so. It is a lot safer and more convenient to use a water conditioner from pet shop - it doesn't need to be a fancy nor expensive one, just please make sure it says "neutralizes chlorine and chloramine" on the label. Both chlorine and chloramine could also burn fish's gills and cause them to gasp for breath at the water surface.

Not the answer you're looking for? Browse other questions tagged health aquarium fish goldfish water-parameters or ask your own question.

3
Why do my Glofish Skirt tetras stay on surface after 30% water change?

4
Did my catfish kill my betta
2
Why did all 45 goldfish (and 2 mosquitos) in my pond suddenly begin an overnight, 4-day die-off?
4
Film on surface of female betta tank
2
Why are my fish always scared?
3
Why do my Glofish Skirt tetras stay on surface after 30% water change?
3
Help. A common goldfish living in 3 gallon tank
1
Why is my oranda goldfish gasping at the surface?