Is it okay to keep a dog chained in a room at night with proper food and water?

I recently got two stray puppies. One puppy died because a stray dog had bitten him. We tried our best to save him, but unfortunately, he died. They used to sleep together in a separate room. Now another puppy has become alone (age: 7-8 months). He used to roam around. I live in a village near the highway. Two days ago, I saved him from an accident and he injured his leg but now he is fine. I got really scared of stray dogs and the highway (it is a national highway, so very busy). So I decide to keep him chained and I am sure if I leave him unleased then he will die within a week. I understand their need and know the value of freedom for anyone. I take him for 2 long walks of around 1.5 hours long and 3 small walks in between daytime for around half an hour. I want to take him inside my house, but My mom is not allowing me. She doesn't like animals that much.

My family is not very economically strong, so can't do much. What I can do the best is I can provide him enough food and a lot of love. He sleeps in a separate room outside our house and he does not cry and whine, but I feel very guilty that I am not able to provide him full freedom that he deserves, I love him so much. Is he feeling lonely? What are the best things I can do for him? I have tried finding a new home for him, but have not succeeded. 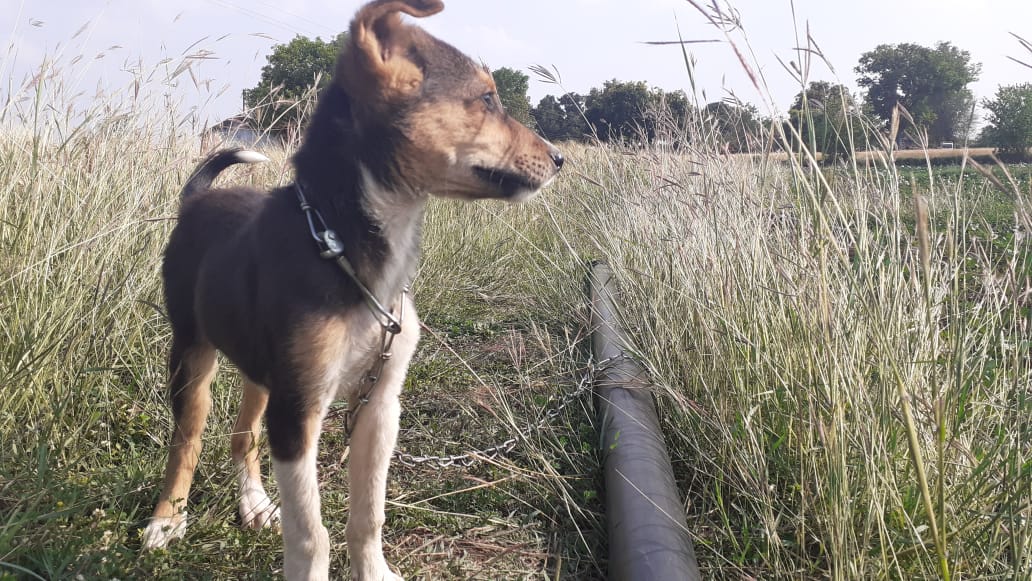 I can understand your fear, but dogs should not be chained at all. Where I live it's even illegal to keep a dog on a chain because it's considered animal cruelty.

Dogs cannot understand that you want to protect them by keeping them on a chain. They also cannot understand why they cannot move to a certain place if there's no wall or obstacle in front of them. Or why they cannot chase the man or other dog away that's so close and yet cannot be reached. Being on a chain is not comprehensible for dogs and their psychological development will suffer. Many will also develop problematic behavior like aggression, constant barking or compulsive behavior because of that. They might even hurt themselves by pulling too hard on the chain. (That's why it's illegal to keep dogs on a chain in my country.)

The best solution would be keeping him behind a fence. If that's not possible, I suggest you rather teach him that the highway is dangerous and that he should never go there. You do that by going on a walk with him near the highway (maybe 10 meters away) and

His dog mother would have done the same thing. She would have stood between him and the highway and stopped him from going there. It will take some repetitions, but eventually he will understand that he's not supposed to go there.

Not the answer you're looking for? Browse other questions tagged dogs diet psychology leash-training new-pets or ask your own question.

7
Preparing a dog to stay alone without crating
10
Putting leash on dog
6
Can I make my dog comfortable around children?
1
Should I get a puppy that's been separated from its mother?
3
I need help with dog training treat for my Siberian Husky
3
What's the Difference Between Pulling Back on Leash and Stopping?
2
Help with house breaking a Malamute puppy
3
Existing puppy (18 months) scared of new rescue (between 2 and 4 years) - will this stop?
1
My dog is aggressive around other dogs
1
Older dog being aggressive towards puppy