I am trying to devise a plan to get a beloved treat-motivated female dog to drink from a baby/puppy/whatever bottle, and I only found articles on the topic of bottle feeding puppies (no information about the elderly).

She is remarkably brilliant when it comes to food and its acquisition. Right now, she is struggling with cancer as we try various drugs and is dehydrated due to her tongue being too weak to effectively "slurp" up the water from her drinking bowl (at least, that's my observation and inference). She isn't suffering too much to enjoy life (yet), so I want her to have a good quality of life while that lasts.

She eagerly received hotdog water (the liquid created from cooking hotdogs in a pot of water) via tiny spaced-out squirts from a syringe, but is coughing a little so I think she unintentionally aspirated a little hotdog water. Thus, I don't think the syringe is a viable method of delivery (perhaps I'm wrong and there's a trick to it. If so, please tell me).

My thinking is that baby puppies are capable of creating enough suction to draw milk from their mother's nipples and baby puppies can even suck from a silicon-nipple bottle, so maybe (just maybe) my sweet old dog might still have the ability and instincts to suck from a bottle with a nipple on top. I bought a (human) baby bottle at the store, filled it with hotdog water, and swished the end of it in hotdog water. My dog licked it and even bit down on it, but I don't think she ever tried to suck it (or, maybe, she wasn't able to suck it. I don't know). Obvious problems include:

P.S. I'm not feeding her hotdog water all the time (though, she does receive the leftover hotdogs). I'm only using the hotdog water to train her how to use the equipment. Once she learns how to use the equipment, I'm confident that she will be able to receive regular water because she's a very smart dog and surprisingly aware of what is really going on, including the fact that I am trying to help her.

First off, you're working under a completely wrong assumption: that sucking milk from a teat or a bottle is less work for the tongue than lapping up water from a bowl.

Puppies don't have the muscles necessary to suck from a nipple in their lips. Instead, they curl their tongue around the nipple in a U-shape and suck the liquid with their tongue, as opposed to their lips. And they can create quite a lot of suction like that.

The nipple must be the correct size in relation to your dog. Puppies are tiny, so they need tiny nipples. If your dog is bigger. you need a bigger nipple.

The nipple must fit between the canines of your dog and have a little extra room for the tongue to wrap around it. I doubt the shape makes much of a difference, but I would go with straight and tubular, if available (basically an oversized puppy nipple).

How to induce the instinct to suckle?

A funny experience I had with my dog lets me assume that the instinct to suckle never fully vanished. I was holding a CD (for those youngsters around here: shiny disk with a hole in the middle, where music used to be stored ;) and I had my finger poked through the hole. My dog was interested in the object so I held it down for him to sniff it, but instead he suckled on my finger.

You could simply take a piece of cardboard and cut a hole the size of the nipple into it. Stick the nipple through the hole and see if she starts suckling. Her nose must press against the cardboard, so the nipple must not stand out too far.

If she doesn't suckle, maybe she isn't capable anymore.

Is this really the solution to your problem, though?

If your dog already has problems with her tongue, she probably won't have the muscle strength left to actually suckle liquid from a bottle. But then there are human babies with a similar lack of strength, so you can use some baby bottle hacks for your dog as well:

Please be aware that both hacks combined may lead to leaking.

The type of syringe you describe is hard to control. A rubber balloon syringe or baster syringe is much easier to control and far less likely to cause aspiration. Just make sure to never use a glass syringe! They are available in plastic, metal and silicone as well. 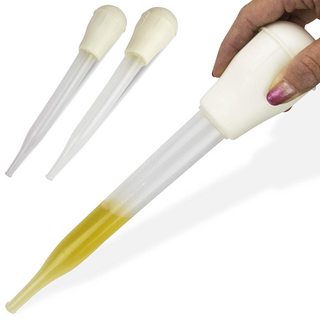 It might be easier for her to drink from a source at eye level and let the water trickle down her throat.

One idea is the type of water dispensers commonly used for small mammals like rabbits or chinchillas. 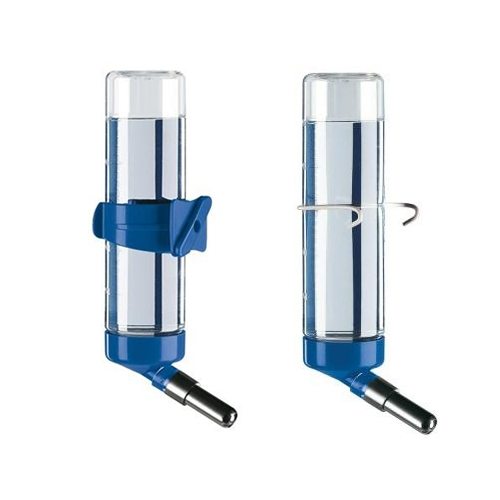 The problem is that they only work up to a certain size and even the biggest size is probably too small for your dog. But it never hurts to try.

Another idea is to put a cat water fountain at her nose level so she can lap the water from a higher point than the ground. Since these include a water pump that is close to impossible to clean, I wouldn't fill it with anything but clean water. 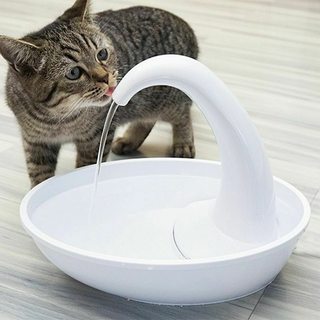 Not the answer you're looking for? Browse other questions tagged dogs training senior-pet drinking or ask your own question.

9
Can rabbits drink from a bowl of water?
4
Dog drinks a lot of water and spits it back up
3
I don't understand crate training. What am I missing?
3
Extremely sick German shepherd puppies
4
Picking a puppy when the dog mom is aggressive
1
How to Limit Puppy's Water Intake?
24
One month old puppy pacing in circles and crying