I have this top-entry litter box for my cat shown below. I'm not sure if it's this box that's the problem, but he will often leave the litter box with urine on his rear which often also has litter stuck to it. This is pretty gross as it leaves little deposits wherever he sits around the house. I imagine he's squatting right on top of the litter when he pees for this to be happening. Is there anything I can do to prevent it? 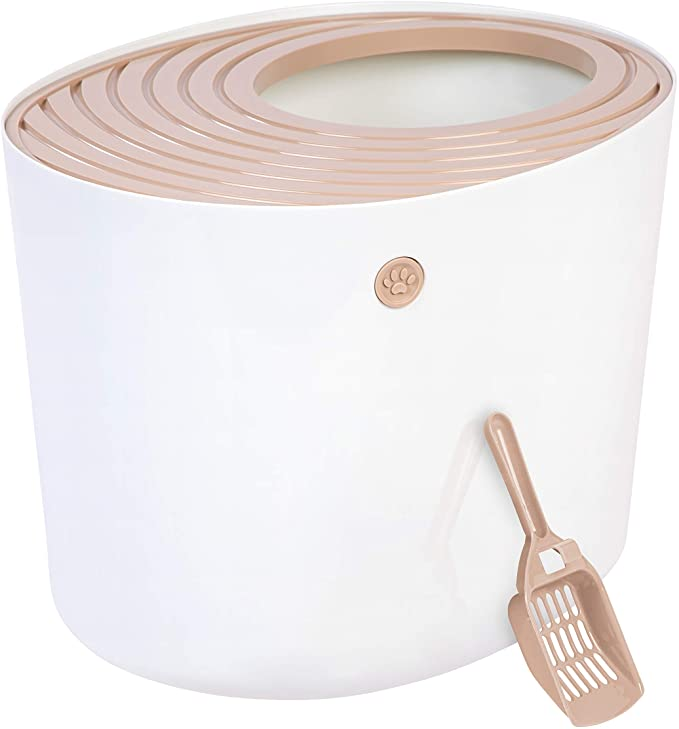 Try watching what he does when he uses the litterbox. It will probably be very informative.

But without being able to watch, I lean towards either the problem happens when he is about to jump out of the box, as a lot of cats sort of sit when they are preparing to jump, or that he ends up doing it because the box is too small. If it's either of those, replacing the litterbox with something that will address his problem is the obvious answer. You might even try just a regular lidless box, because it will give the cat more room to maneuver. You can also use things other than litterboxes as litterboxes, if your cat really seems to want something bigger than the typical litterbox. For instance, a big Tupperware container can work as a litterbox.

If it's a problem of he's just squatting wrong while going, I would take him to the vet. It could just be a bizarre habit unique to him, but I don't think it's very typical behavior. Male cats I've had experience with tend to pee on the side of the box, if anything. Therefore I would make sure he doesn't have some medical issue that makes it difficult for him to squat normally. If medical issues are ruled out though, it may just be a very unfortunate habit he has that I don't see much way of fixing. You might try taking him to a groomer to shave his rear, though. It'll at least help some at keeping himself clean, especially if he has long fur.

Not the answer you're looking for? Browse other questions tagged cats toilet-training grooming urination hygiene or ask your own question.

10
Cat pooping outside of litterbox, but not always
4
My cat is peeing around the litter box
7
My cat uses the litter box wrong!
4
How to minimize litter being tracked out of a custom litter box?
4
Cat: Sanitary Issues and Peeing Outside The Box
8
How much depth of sand in litter box is ideal for cats?
4
Managing litter box for cat with polyuria (increased urination)?
2
My Bengal cat doesn't cover his feces and pees over the edge of the litter box
1
Cat urinates on his back paws; what should I do?