I have bought 4 German blue rams from two different shops, hoping I can’t get a pair from them and now I have a few questions. 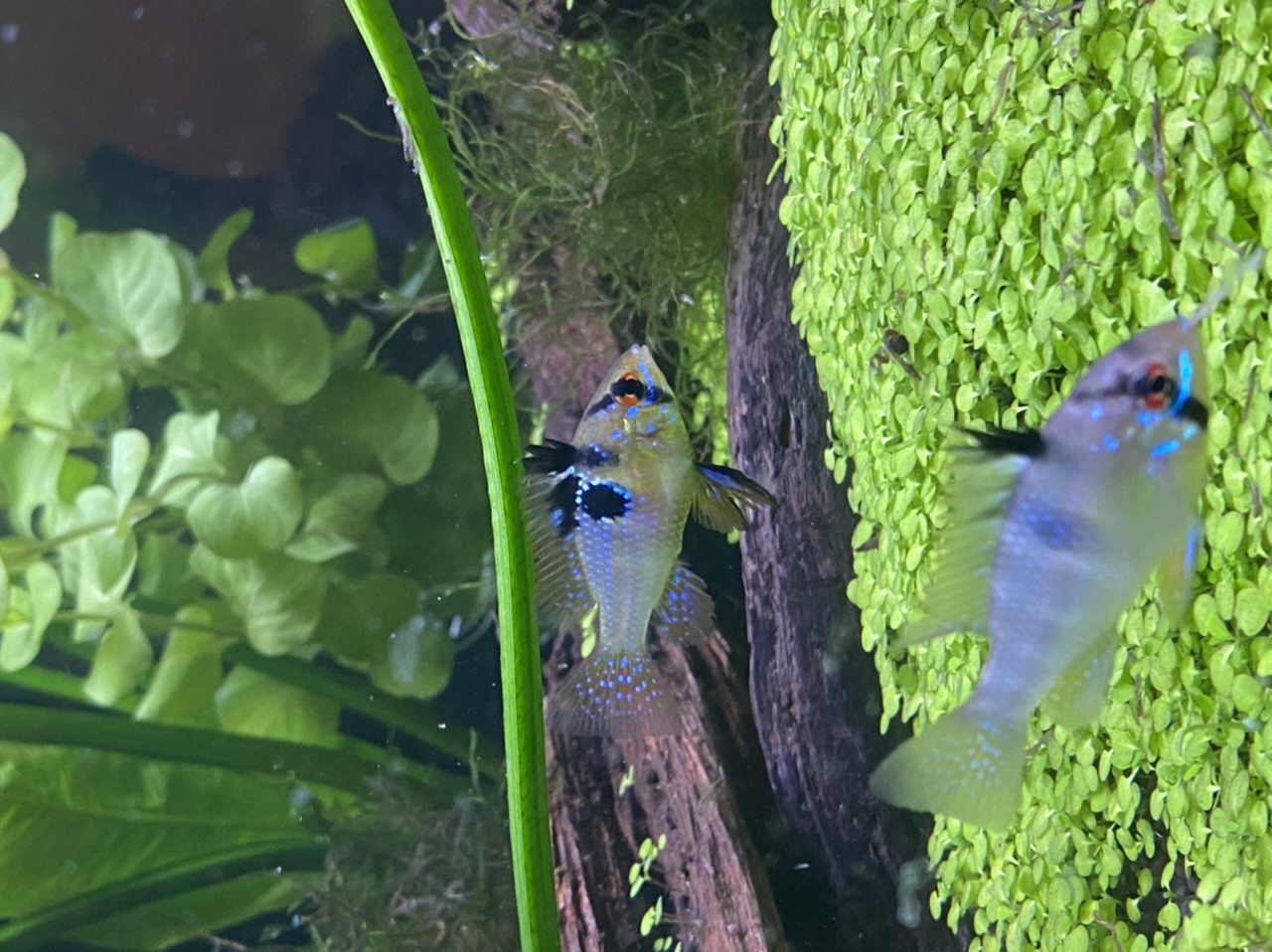 I will update with more clear photos if that helps.

Out of 4, 2 smaller and 2 bigger, three of them have been the dominant fish of the tank for a while (almost a day) 3 days so far in the tank. The tank is 90L and plant and moss and driftwoods made a lot of hiding spots. Usually, the dominant one becomes the shiniest and brightest fish in the tank.

German blue rams are generally known to be one of the most peaceful cichlids and are relatively calm, but they could still infight. I've seen a few "fights" between two males and they weren't really looking violent at all, it was mostly intimidation and a few nibbles here and there. On the other hand, they were inhabiting relatively large enough tanks.

I don't really think that these male-versus-male fights could be fatal. It theoretically could happen over an extended period of time, in extremely small and cramped tank and if one of the males was significantly larger or more dominant than another - it could be that the submissive one might get relentlessly and constantly chased and stressed, ultimately resulting in death.

But ultimately, it would rather be a slow process of one causing a chronic fatigue to the other, they would not rip each other apart overnight - which means you, as the owner, would certainly be able to notice it and resolve the issue in time before any significant damage was done, for example by separating them or upgrading your tank to a bigger one and rearranging it's interior to provide more hideouts.

As far as I know, if two of them were fighting it wouldn't necessarily mean they're both males, as the females tend to be territorial too - less so than males, but still. But certainly females would show much less of either aggression or territorial behavior than males. It's a bit complicated, because the tendency to fighting would also depend on their age, size of the tank and the tank's spatial settings. And I wouldn't say it would be always classified as an active aggression - but territorial, sure.

Regarding the issue whether these on your photo are male or female - I'd say they're both males, but honestly my guess is not much better than yours. Females usually could be recognized by the distinct peach-pink patch that the males are lacking, but that is not in any way a definitive and sure method of recognition.

A picture (source: www.aquariumfishparadise.com.au) featuring a male (the larger one) and a female (the smaller one) might give you an visual idea what do I mean by that peach-pink patch - it's that place at the middle of the body, that is covered by the translucent, transparent almost, pectoral fin. 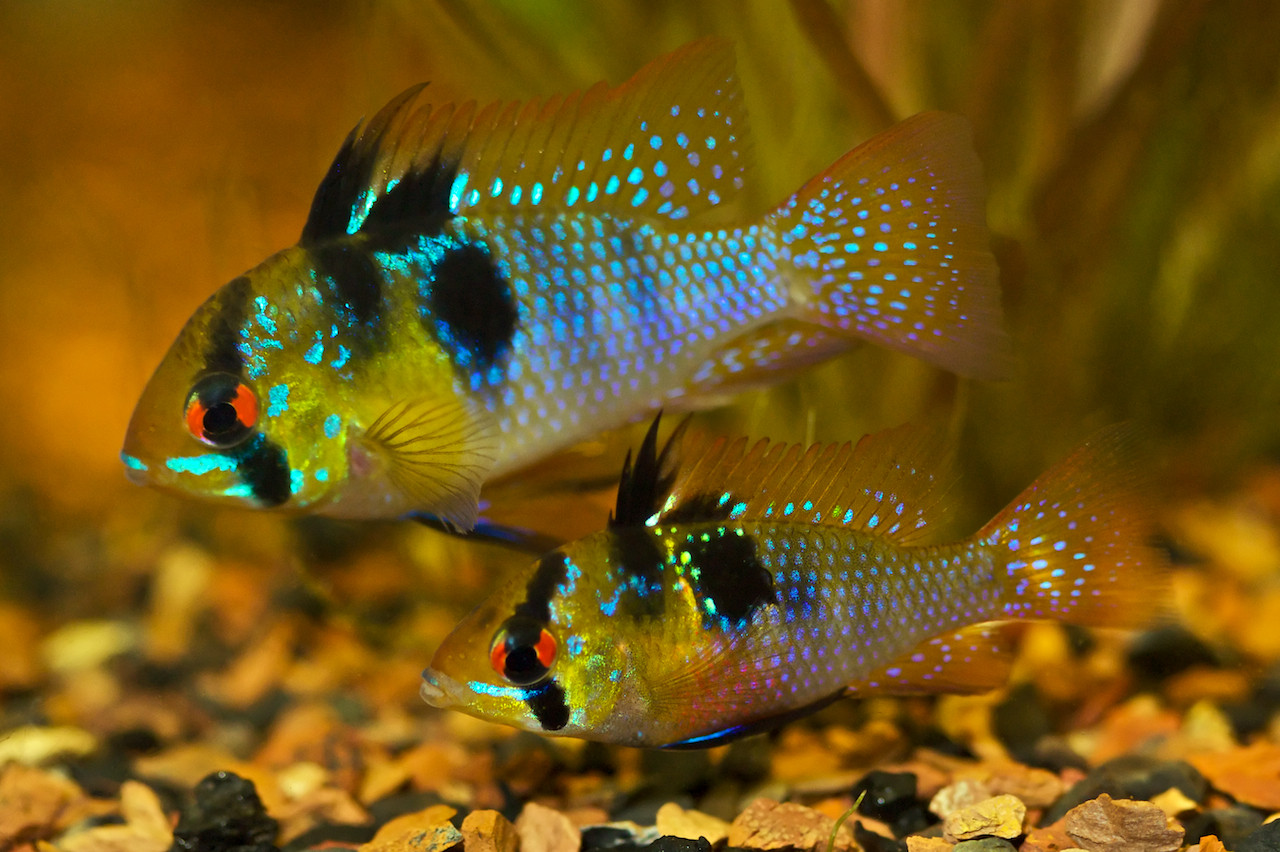 Also, there is another photo (source: lovefishtank.com) featuring a female ram with an even more prominent peach-pink spot: 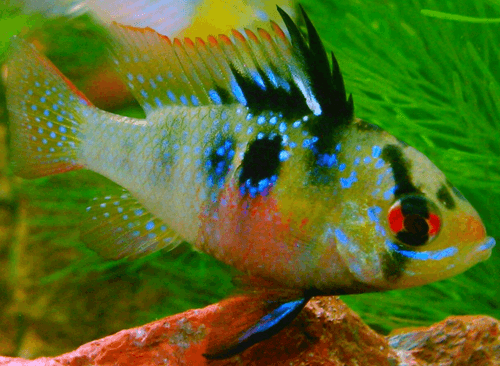 Not the answer you're looking for? Browse other questions tagged aquarium fish gender-differentiation cichlid or ask your own question.

18
How do I control the convict fish population of my aquarium?
7
Do giant gouramis tolerate tank mates?
6
Is it possible to keep two small Goldfish in a 2.5 gallon (10 litres) tank?
6
White marks on my Pearl Gourami turn into blisters/tumors before they die
2
Betta with other fish… a fight? or other cause?
3
Will my fish's tailfin grow back?
5
What are these critters in my tank?
2
Are German blue rams canibals