Can an abused, malnourished and matted poodle 2½ - 3 yrs old ever show unconditional love like he was intended to? 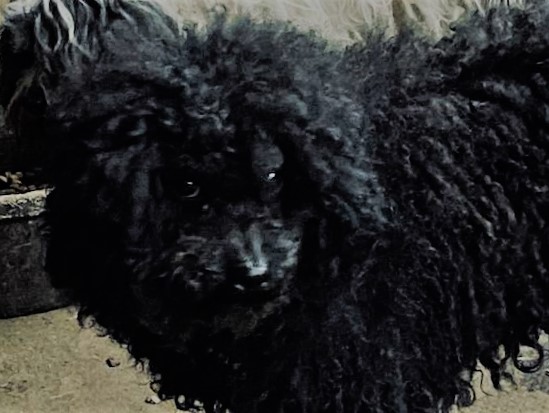 How can someone do this to an animal?
Will be ever show unconditional love like he was intended to?

Having done rescue work for Mastiffs for a number of years I firmly believe that the answer is yes. BUT, it takes a ton of patience and a lot of time. It isn't an easy or quick road at all.

Our worse case was food aggressive on top of abuse and neglect and it took about 3 years before she came out of her shell and started trusting people, other dogs and was no longer food aggressive.

My wife has a sure fire formula to put weight back on a dog that they are sure to love. Mix cottage cheese with cooked pasta and they will thrive. Start mixing in whatever food you would normally use as you see the weight coming back and very slowly start reducing the "good stuff" (cottage cheese and pasta).

My answer is not intended to detract from other answers and comments but rather to supplement these.

My mother took on an abused rescue dog - collected when he was about 6 months old - a beautiful black kelpie.

He was terrified of almost everyone in his early years, but as others have written, with time and patience he became an extraordinary, alert, truly considerate and highly social member of her pack. If he was shown kindness he gave so much energy in return.

Dogs that have suffered and recovered in this way seem to develop a deeper sense of empathy.

So this is my supplementary advice...

My dog at the time, a cattle kelpie cross had known my mother’s dog most of his life. They were great friends and loved spending time together.

My mother’s dog hated the garden hose. He would run away terrified if anyone of us picked up the hose.

We could only assume that a garden hose was somehow connected to his abuse by his original human. Bathing / washing him had to be done gently and carefully with a bucket of warm water and a sponge.

My dog didn’t like baths, but after a long walk on a hot day, he loved to be washed with cool water from the garden hose, especially if he’d swum in the nearly dam (very smelly).

After we walked the dogs together, at the end of a hot day, I’d wash my dog with water from the garden hose. Initially (first couple of years) my mother’s dog would not come near us. But over a period of a number of years of this repeated behaviour, eventually my mother’s dog began to come closer and closer. We could tell he was compelled to investigate this opportunity to enjoy the same pleasure that my dog obviously exuded, but remained somewhat scared.

One day, he walked up to me as I was finishing my washing routine with my dog and he let me wash him. It was a heartbreaking moment. We were all overwhelmed with happiness at his courage and faith and trust.

My understanding - this evolution in the behaviour of my mother’s dog developed over time, was closely connected to familiar patterns of behaviour and happy events.

However, I don’t believe we’d have witnessed this particular change, had he not developed a close relationship with myself and my dog, but also critical is that he saw my dog as a positive role model, whom he trusted implicitly.

My advice... not immediately, but over time, encourage your rescue dog to socialise with one or two other dogs that you know very well, you know are calm happy creatures and you can trust implicitly to provide a positive canine role model.

Not the answer you're looking for? Browse other questions tagged dogs health socializing new-pets or ask your own question.

9
5-month puppy first day at home: guarding couch, growling, biting
6
How can I keep my dog from barking when I don't know what he's barking at?
6
Dog won't eat or drink or come to me on his own? How do I regain his trust?
3
One of my dogs harass my other dogs, even though they are submissive
2
Growing black stain in a dog's lower eyelid
6
My dog has been acting strangely around one of my cats' butt
15
How long and often should I walk my pig?
3
What next for our scared shelter cat?
1
How to make an unsocialized cat get along with a socialized cat