I've heard over the years that horses shouldn't be fed grass clippings from lawn mowers.

Is this dangerous and why would it be?

It is NOT safe to feed horses grass clippings.

Can I feed my horse on lawn mower clippings and other garden waste?

NO! Feeding horses on lawn mower clippings can be very dangerous for several reasons. When lawn mower clippings are fresh they are fermenting (this is why they are warm or even hot when you put your hand inside a fresh pile of clippings). If a horse is given a pile of fresh clippings to eat he/she can gorge on them. As the clippings have been chopped up small (by the mower) the horse does not need to chew them and therefore swallows the clippings without mixing them with saliva (which is what happens when a horse chews its food normally). This means that the clippings arrive in the stomach already fermenting and without the benefit of saliva to ŌĆśdiluteŌĆÖ them (in the normal situation grasses that are eaten by the horse do not start to ferment to this extent until they are much further along in the gut). The gases given off by the fermenting clippings can expand to the point that they rupture the stomach (which is fatal). If the clippings do not cause rupture of the stomach, they can result in colic (abdominal pain) due to complications further down the intestinal tract.

Grass clippings are a big NO for horses!

I spoke to the Vet today and she didn't think her death was the result of grass clippings, because of the lack of gas in the stomach, but from a blockage (or twist) high in the bowel behind the stomach. Not palpable on physical examination.

A wheel barrow of grass clippings was dumped into our horses paddock, upon which the two horses gorged upon them. An older horse and a yearling (18 month old). When I saw the clippings I kicked them out so they weren't clumped. If I had known how truly dangerous they were I'd have called a vet immediately and have had them raked out totally across the grass or taken away.

The yearling was sick a day later, but this wasn't discovered until 36 hours later, as she grew ill overnight. I had woken at 2 am to one of the horses calling out and a cow replying from across the road, and walked the line of the paddock, and didn't see anything unusual. I didn't go into the paddock, as I didn't suspect the horse was sick, as we were in the worst bush fires of recorded history, the paddocks were soaked in smoke for many weeks and there has been a continuous stream of ash through the skies for the day. We had wild life travelling through the property to escape the fires ten kilometres away and I though the animals were reacting to the fires. Little did I know our yearling filly was down and in agony.

The next morning we called the vet and she didn't look well. She was sedated and given pain relief. The vet said if she went down again to call her. She did and when she returned to see our girl, she was shaking in a way that was symptomatic of shock and in more pain. Sweating and her heart rate had doubled to 88 bpm. She was given more sedation, the vet checked her stomach contents for food to see if there was a blockage in the small intestine, as she couldn't feel anything rectally on either visit. She was put on a drip and collapsed again.

The vet gave her local anaesthesia and tapped the fluid from her abdominal cavity to see if there were signs of a rupture. The fluid was supposed to be a clear pale yellow, it was darker than it should have been, more plentiful and had some food particles in it. Meaning there had been a rupture.

We put her head in my lap. She was given more sedation and euthanized, as there was no hope for her survival.

It was devastating for all of us, including her paddock mate who had cared for her since she was a young foal.

Dyani (our filly) had an impossible start. We purchased her mother from a horse meat dealer, when she was pregnant with her. Her birth was eventful, as she was born during the worst storm of winter and suffered exposure. She also suffered a broken leg from her mother at three months. Overall, this was all due to my inexperience and poor horsemanship. I failed to manage these situations well and am ultimately responsible for her death.

Overall she was a happy young horse and was very special. A special nature and we were truly fortunate to know her. It was devastating to see her life end in a such a painful and preventable way. No fault of her own. Fit and healthy. It's something horse owners need to be aware of, which is why I'm posting this.

One of the last pictures of Dyani - sharing food with her paddock mate and close herd mate Penny. 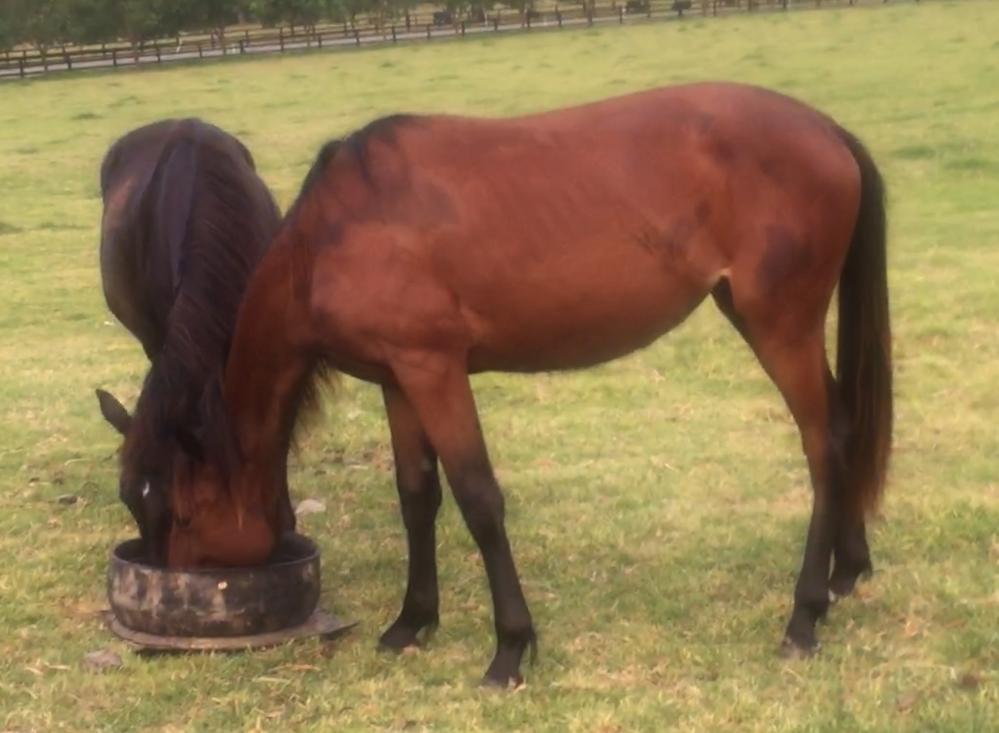 A collage of Dyani 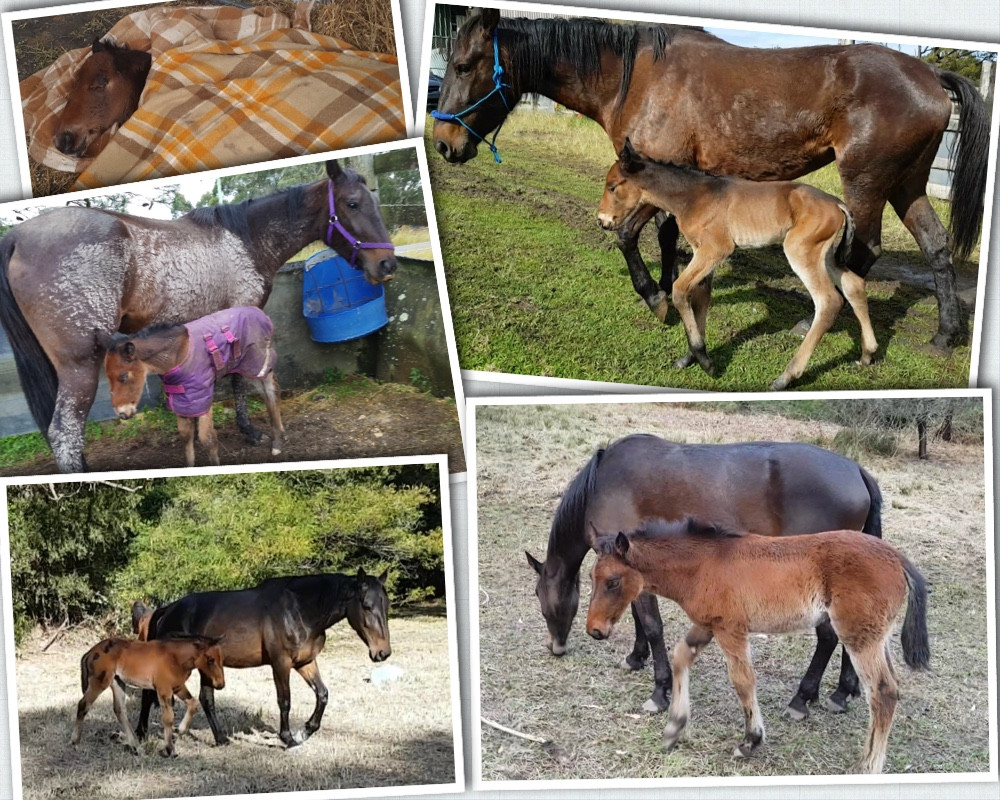 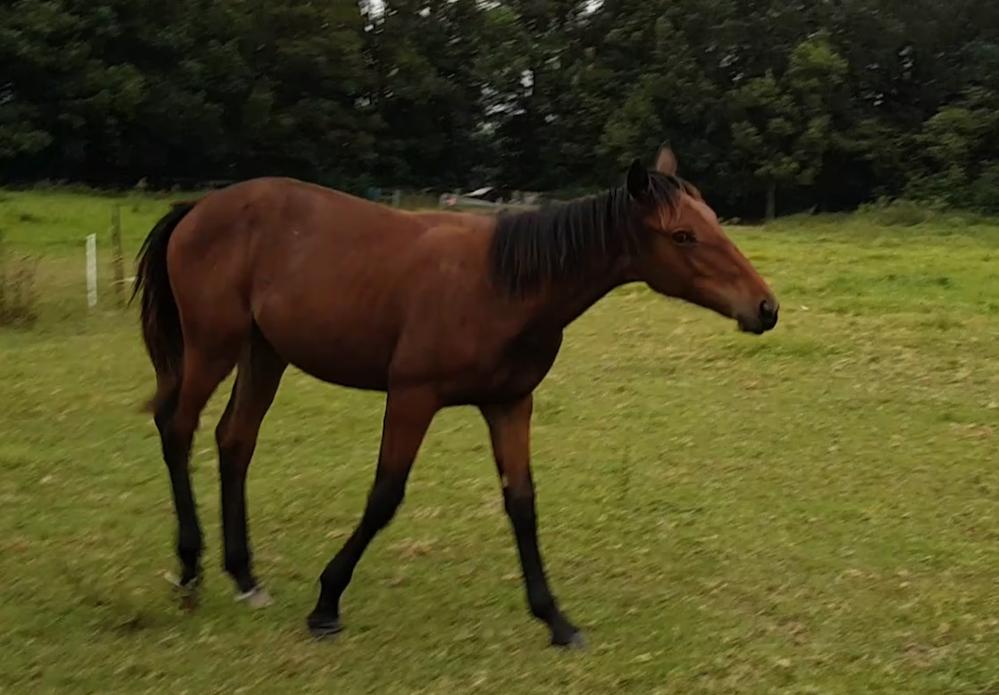 I know that this is bad for rabbits and gives them an upset stomach because the grass starts to ferment and die causing toxins. Also if the lawn mower has lots of oil or petrol on the bit that cuts the grass it can contaminate the grass with that. So definitely no.

11
Do my horses need to be shod?
3
After using Spectracide® Weed Stop® for Lawns how long before the grass is safe to eat?
4
How can I tell if my horses need additional protection from the cold?
2
Can horses eat bread?
2
Does rugging horses interfere with the grow of the winter coat?
4
What is a good way to remove the stickiness from adhesive bandaging from my horses fur?
3
What alternative feeds to hay, grain and legumes can horses eat?
2
How to treat mudfever in horses