I keep seeing the word "rub" when people are talking about reptiles (it was also possibly used in a conversation about rats, but that was a while back and I might be misremembering).

From context, I can tell it's a container pets are kept in, but I can't glean any more details than that. What exactly does it mean? And does it apply only to reptiles, or can it be used for amphibians, arachnids, small rodents...?

I know the term as R.U.B. aka Really Useful Box.

It's a description for the new use of plastic storage bins as a DIY vivarium that you can keep snakes in easily (and cheaply), as you can easily build a shelf, or rack to stack the bins along a wall. 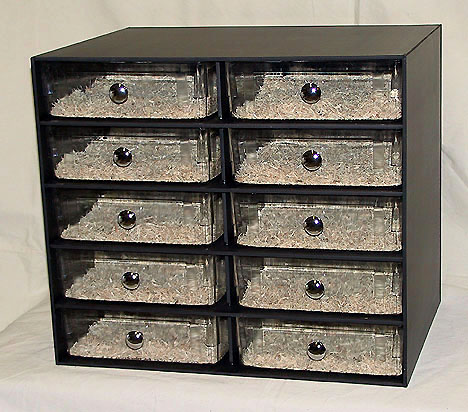 There are benefits to these methods as well as criticisms.

It's cheap and easy to clean. It's lightweight, so you can stack it along the wall, where a glass terrarium would be too heavy to take down for feeding times.

One of the biggest arguments for R.U.B.'s is that they're so easy to sanitize. When it comes time to clean, you can place the snake in a new bin, then clean the old one at your leisure. Also, in the case of some illnesses, you can simply replace the bin rather than spending large amounts of time and money on sanitizing it.

Since the bins are one piece, you don't have the risk of bacteria growth as in vivariums door hinges.

Really, the only applicability of R.U.B.'s is for breeders, as it allows them to care for multiple snakes easier, and to better organize them. They can be used by home owners of small snakes, unless you can find a sturdy bin that has enough room to keep a large snake in. It's important to remember that R.U.B.s are not a replacement to vivariums if you do not treat it as a vivarium. Snakes still require bedding, decoration, heat, light, and most importantly space, when being kept in a R.U.B.

This is where the criticism comes from. The growing use of R.U.B.s as a way to store snakes for later. I can't say I've seen snakes kept in R.U.B.s that weren't anything but the snake and some substrate myself. Not to mention the snakes kept in bins without room to move around. The benefits of a vivarium is that it promotes the proper care of snakes, with a properly built habitat.

Not the answer you're looking for? Browse other questions tagged reptiles terminology or ask your own question.

14
What is the difference between "Open Door" and "Limited Access" shelter policies?
8
What terms are used for mice that are fed to snakes, and what are their meanings?
8
What is brumation?
4
What does it mean to "bell the cat"?
11
What does "Het" mean when talking about reptiles?
12
What is a hound?
2
What does conspecific mean?
8
I have heard people talk about "candling" eggs. What is this?
4
Language problem: what is tetra?
9
What are snake morphs?