What are the stages in a leopard gecko's life cycle?

What is the life cycle of a leopard gecko? What different stages of development (hatchling, sexual maturity, "menopause" equivalent) are there and at what age do they occur?

Is it different for male and female, or the same?

As far as the general lifecycle of a gecko goes, it's quite simple. The gecko starts as an egg, hatches into a young gecko, becomes an adult, and makes more eggs. 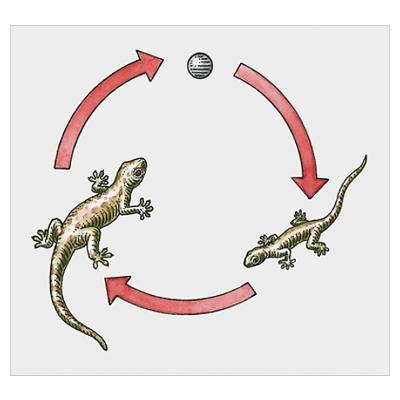 Leopard geckos breed all throughout January-September, and can even store the sperm for later, until they feel they're in the right conditions to lay eggs. Like most reptiles, they prefer muggy (warm and damp) soil to lay their eggs in.

The clutch of eggs is usually comprised of two eggs, though a single egg clutch isn't unheard of, and they can generally lay up to 5 clutches each season as it only takes about 2 months for the eggs to incubate.

Once the geckos have hatched, they survive off of the egg yolk for the first few days. Until their first shed, at which point they'll survive another day after eating their shed skin.

At this point, the geckos are ready to start hunting insects. Their only real goal for the 15-20 months until their mature adults is to grow in size. They're about 3-4 inches when they hatch, and reach 8-10 inches when grown.

After they're matured, leopard geckos jump right into the mating scene. Males begin to seduce females by licking and nipping at them. If the female likes it, she'll respond by lifting her tail.

This of course, brings us back to the beginning of the circle.

The lifespan of wild leopard geckos isn't really well documented. Their lifespan is thought to be about 20 years, similar to it's lifespan in captivity, though their are many external factors that can come into effect.

Because of this, it's unlikely that female leopard geckos in the wild will reach a stage of menopause. Not only are they likely to get eaten by a predator rather than dying of old age, but the act of laying eggs is very stressful in itself. It takes a lot of energy from the gecko, as it's passing so many nutrients into the egg(s).

It has been documented by leopard gecko breeders that laying eggs shortens a female leopard gecko's lifespan (The same holds true with many reptile species).

Because of this, many leopard gecko breeders (along with breeders of other species) only breed their females lightly. Having them only lay one or two clutches a year, and retiring them from their breeding rotation much sooner than you would probably find in the wild.

Because of this treatment, it's hard to say if even captive leopard geckos reach a stage in their life that's comparable to menopause. I don't really want to say that they don't, because while they can lay eggs up until they die, if they're in that situation it's likely that they died earlier than what could be considered a normal lifespan.

On the other hand, I don't want to say that the do either, because there's really nothing that shows that they do. Some people will say that they go into menopause after 5-6 seasons of egg laying, but I've seen them bred for longer, so I attribute that to overbreeding and/or breeding out of their season.

13
What types of food and vitamins are appropriate for a leopard gecko?
12
My leopard gecko is digging. Does this mean she's gravid and trying to lay eggs?
3
What is the difference between Rainwater Albino, Tremper Albino and Bell Albino leopard geckos?
7
Do rabbits experience menopause?
4
Baby leopard gecko won't eat!
3
Leopard gecko's odd behavior
3
My new gecko is fighting my old one!