Cat jumping and clawing at her door, disrupting my sleep

My cat is in a room of her own, every night she jumps and claws at her door to get out. Any sound she hears (from me), she starts yelling and jumping to open the door. If I have to go to the toilet or something, she starts again.

I'm fighting a cold, I must have been coughing in my sleep. I've heard her 6 times last night.

She's a very fit cat, she can keep it up a very very long time.

If she wakes me early in the morning, like a few hours before I need to wake anyway, I'm usually insufficiently tired to find sleep again. Which I then pay for later in the day or the next.

Things people have told me I should do

Just ignore any kind of bad behavior. Let her figure out that it's unwanted.

She just doesn't learn. Ignoring her does have the benefit that I don't have to leave my bed, but I'm still kept awake.

My parents have veto'd this. They are my baby sit and they don't like the idea of having two cats around.

Also, it might just be two cats jumping at the door then.

Buy plenty of toys for her to keep busy

She has a lot. She'll play a bit, but has always shown limited interest in any of them, She's just not the type that goes crazy over toys. Even in general these have little effect.

Play with her before going to bed so she's tired

I do that anyway. Again, since she's not particularly triggered by any of the toys, it's hard to get her tired. And again, she's very fit, even if she -is- triggered, she wont be tired enough to sleep the entire night through.

Let her sleep with me.

There are two opposing teams on this opinion, strongly yes and strongly no. I've chosen to be on the no side, because I think it's good to have -some- kind of boundary in place. She might keep me up even worse than what she does now.

Also, my girlfriend is against the idea. She doesn't live with me (yet), but she doesn't like the general idea (not a huge cat fan, she likes her and wouldn't mind having her as pet because she's my cat), nor having cat hair in/on the bed.

What I think the reason for this behaviour is

Since my cat isn't really into toys, and it's just me living with her, I think she wants to have access to me.

What I can't find

I'm told there's some kind of rubber of plastic mat with cone shaped spikes on it that you can place outside your door. Cat's are supposed to not like the feeling of it.

I haven't found a brand name or retailer that sells this.

What should I do to stop my cat from displaying bad behavior (especially the kind that keeps me awake at night)?

I've received more information regarding the mats, it's this type (I was mistaken on the cone shape, this looks to be spikes). I'm curious to how large the gaps are, I kinda think she might tip toe through it, though jumping at the door would be hard I guess. 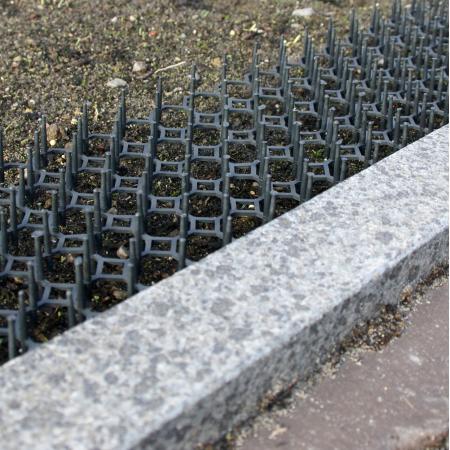 Update - in response to questions:

Did she have easy access to you before this problem occurred. Or did she do it all her life?

I've never allowed her to go into my bedroom (and toilet). It's been going on for a while, but not all the time afaik.

Was she adopted or raised by you?

Raised by her mom and siblings until 13 weeks (at the breeder), she's a British Shorthair.

Are there other people living in the same house as the cat, and if so does she do the same when they "wake" her up?

Just me. Possibly related, she's never been really brave and I've had a burglary 3-4 years ago where she was home alone.

Play with her (the cat is female, right?) before she eats. And feed her at night time. When you go to the gym, are you hungry afterwards ? And when you have eaten your fill, you are sleepy, right ?

Same goes for any other animal with a digestive system. But as every other animal, they would rarely exhaust themselves to the point they are dead tired, so you would have to use some trickery to do so.

(Disclaimer: this backfired on me several times. Cats got extra fit, and/or realized they were being tricked)

I would take a bag of catnip, watering down 1/3 up to 1/2 of a teaspoon with half of an liter of water. And dip some long range toy in it (you don't want hungry cats claws near you at this point), and once the cat starts demanding the food (meowing, glancing at the tray, scratching... whatever your cat does) I would start dangling that catnip dipped toy in front of your cat.

If your cant doesn't eat where it poops, or is neglected in some manner, her pupils should dilate, and the game should start. You should know that the game is done, once the cat is very reluctant to move, and often sits (lies, balls down) near the place and doesn't move much. Then you serve the food.

While the cat eats, you can all go and prepare for bed, and cat should make one last effort to find a cozy place to sleep. And you should have your dreams again.

My experiences with this method were as follows:

Just keep in mind, if your cat is sad or "depressed," it can be hard for it to do anything. You can check if your cat feels this way, by showing it something new. If the cat goes to smell it, it probably isn't "depressed", and you can play with it. However, if it is, you need to check if your cat feels threatened by some other animal, or is it in a polluted or stinky place. My Persian cat was like this, because my father had the great idea to feed it near its litter box and near a coal powered heating system, with a new bob tail in the house. Once we changed where it ate and pooped, the cat came alive.

I had a similar problem with my cat. He sleeps outside my bedroom, and we always close the door. During the week I feed him at about 7am, when I go to work, so I think he wanted the same treatment on weekends, thus, he started scratching my door and mewing loudly. This behaviour went on for several weeks. And what finally worked for me was, closing him in the kitchen. (We don't hear him there). Now he doesn't scratch our door anymore.

Edit: To be clear, we closed him in the kitchen, only the days where he would wake us up, and when he started scratching the door, that way he knows what's happening. We did not lock him the night before, when we went to bed.

This might be a bit different to you, since he's already closed in another room, but maybe you can try leaving him the whole house open, expect your bedroom, that way, if he wakes you up, he can feel the punishment from being locked in another room. It also works for me, 'cause the kitchen is where we feed him, so it's easy to make him come inside with some "food-noise". When he's in, remember to NOT give him the food tho, or he will feel rewarded for waking you up.

13
Why would a cat ask to play all the time and how to satisfy her?
3
How can I train my 5 month old cat to not jump onto table and counters?
2
How can I stop my cat from clawing at my door?
1
Older female cat and male kitten, playful => bad reaction
9
Cat constantly needs attention. Will she grow out of it?
9
Cat won't let me sleep at night
5
Trying to get a good night's sleep with an overly affectionate cat
7
Cat meows very loudly when I lock her out of the room
1
How do i get my cat to stop climbing my blinds to get on my bed