Do dogs interpret decibels the same as humans?

One of our dogs was very badly attacked a few months ago by another dog (thankfully she survived) and we have recently been looking at methods to deter anything like this happening again.

One of the things we found was basically an air-horn, specifically the "SAFETY-SPORT DOG HORN XL", which states it is approx 120dB.

Now, if it comes to a point where we have to use it, I was a little worried about hurting our own dogs hearing. Though through my research it seems short bursts of this horn won't do any damage, however to be on the safe side I wanted to purchase a Decibel Sound Meter to test it to make sure it's not any higher than 120dB.

I found some, but then read on one of them that stated:

PLEASE keep in mind that this meter measures in dBA to account for the relative loudness perceived by the human ear, for more information please contact us!

Then I have seen others mention that:

it can measure both A and C weightings to get the right response for the human ear and can have fast or slow responses to get an ambient reading or a short noise.

When looking at these meters some mention they measure in dBA and others just say dB, I'm not sure if this is on purpose of if they are actually different.

I honestly don't expect anyone here to know the technicalities between all these and maybe I should instead be asking a sound engineer or something, so my question is more if anyone knows if dogs interpret decibels the same as humans with regards to what I wrote above?

dB is the scientific symbol for Decibel

[A] unit of measurement used to express the ratio of one value of a power or field quantity to another, on a logarithmic scale.

The decibel is commonly used in acoustics as a unit of sound pressure level.

Well, that doesn't sound useful at first... but it helps us understand a few things.

What actually causes hearing loss is the pressure of the sound wave that reaches our ear. Wikipedia offers the following examples for sound pressure and dB:

This means that an increase in 20 dB (from 100 dB to 120 dB) exposes your ear to ten times more pressure. That's like the difference of lifting a 100 g bar of chocolate with one finger or a 1 kg bag of flour.

The human perception of the intensity of sound and light approximates the logarithm of intensity rather than a linear relationship (Weber–Fechner law), making the dB scale a useful measure.

That means that we humans don't perceive 120 dB as 10 times louder than 100 dB. We do notice a difference in loudness, but our perception of sound is closer to the logarithmic scale than to a linear scale.

The human ear has a large dynamic range in sound reception. The ratio of the sound intensity that causes permanent damage during short exposure to that of the quietest sound that the ear can hear is greater than or equal to 1 trillion (1012). Such large measurement ranges are conveniently expressed in logarithmic scale: the base-10 logarithm of 1012 is 12, which is expressed as a sound pressure level of 120 dB re 20 μPa.

As stated above, human perception of sound "approximates" the logarithmic scale of dB, but isn't equal to it. At the same sound pressure, high pitches seem louder to us than low pitches. To factor in this deviation in perception, different weightings can be applied to adapt the purely physical measurement of sound pressure level to our human perception.

Most commonly used is the A-weighting, which is expressed in a unit of dB(A) or often shortened to dBA.

[...] A-weighting, though originally intended only for the measurement of low-level sounds (around 40 phon), is now commonly used for the measurement of environmental noise and industrial noise, as well as when assessing potential hearing damage and other noise health effects at all sound levels; indeed, the use of A-frequency-weighting is now mandated for all these measurements, because decades of field experience have shown a very good correlation with occupational deafness in the frequency range of human speech.

This deviation in loudness perception is caused by many different factors, like the form of our outer and inner ears, the sensitivity of different neurons to different frequencies and the age of the listener (we have a tendency to lose the ability to perceive high frequencies throughout our whole lives).

There are several other weighting curves, but A and C frequency-weighting are the most common.

Obviously, dogs perceive sounds at a different level than humans, so the measurements in dBA cannot be applied to dogs. But since dogs cannot answer questions like "How loud is this noise?" there is no separate weighting curve for dogs.

The 1992 study Auditory Perception shows the following audiograms for the perception threshold of sounds in dogs on page 167: 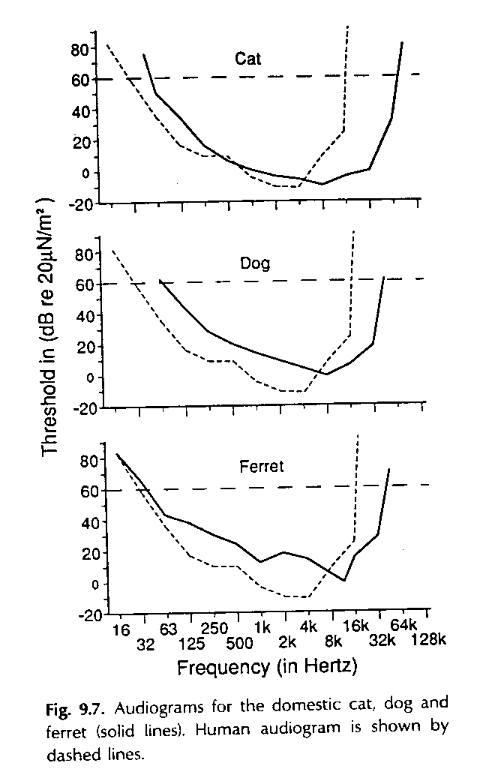 The dotted line is the hearing threshold of humans (for comparison). The lower the line, the better the test subject could perceive sounds. The line of the dog (middle) is shifted to the right, which tells us that dogs hear higher frequencies better than humans, but lower frequencies worse than humans.

That means that a dog horn with a high pitch (comparable to a whistle) seems even louder to dogs than to humans. On the other hand, a deep sound like a car engine probably seems less loud to a dog than a human.

Here it gets complicated. Many tests have been conducted for decades to determine the auditory threshold of dogs (how quiet a sound they can detect), but it's harder to determine how loud of a sound causes a dog pain or hearing loss.

I found an interesting fact in the book "The Behavioural Biology of Dogs":

In the middle ear, two of the smallest muscles of the body are situated: one of them is connected with the stapes and the other one with the tympanic membrane. The contraction of these muscles decreases the transfer of vibration through the middle ear. A reflex elicits the contraction when the incoming energy of the sound is too high. This reflex is also activated immediately before a dog starts to bark and therefore offers protection to its own ear.

So the sound energy of the barking of a dog warrants a protection inside the dog's own ear.

A listing in cuteness.com compares the barking of dogs with different everyday sounds:

[A] sewing machine is around 60 decibels -- the same loudness as a "starting point" bark. A child in the midst of a shrieking tantrum goes to around 110 decibels, which is the same as dog barks on the noisier end of the spectrum.

And on Quora you can find the following claim:

All things considered, I guess you can safely compare the effect of such a horn on a dog's ear to a human ear:

If you want to measure the actual loudness of this horn, don't forget to wear hearing protection yourself.

I have no experience with the effectiveness of such a dog horn against attacking dogs. I presume it emulates a really loud bark to deter the attacker.

As an emergency measure it should not cause any permanent damage or hearing loss.

16
Are ultrasonic repeller devices painful for dogs?
12
Are non-dangerous spiders (to humans) dangerous to dogs?
14
Why do dogs look humans directly in the eyes?
3
Can dogs see things that humans can't?
5
Are loud sounds/music more dangerous for a dog's hearing than a humans?
2
Can dogs get Campylobacter infection from humans?
4
Are dogs much less sensitive to high noise than humans?
2
Can dogs (and other animals) get lost in the same sense as humans?
3
Did "Rough Collie" dogs (and maybe other dogs?) actually guard the farm when all the humans were away?