My cat is a houdini and keeps escaping her cone [duplicate]

Ask Question
Asked 1 year, 11 months ago
Active 10 months ago
Viewed 17k times
12
This question already has answers here:
How can I stop my cat from removing her cone? (5 answers)
Closed 1 year ago.

She had surgery today, spayed, we tried a cone to prevent licking. Well, she got out of it so we tightened to where we would have to remove it without sliding it on and off. Well, she got out again... Any tighter and I fear it'll be too tight, so I tried the neck brace thing. Well, same thing...

There's not much left to do and I don't want to drop an extra 50$ if she tears the stitches open and nor do I want her to get an infection. Please, I'm out of ideas, tired and worried. Is there anything I can do?

The cone can be tightened so it is very snug. As long as you can fit two fingers under it, the cone is not too tight, but she should also not be able to get it off.

For most cats, it doesn't take very long for them to get accustomed to the cone, and resigned to the fact that they can't get it off. Of course, some cats are amazingly adept at getting them off despite every attempt to avoid this.

There are other types of cones (Elizabeth collars) which you can pick up at vets and pet stores. Some pets do better with hard collars, others better with soft collars.

As a short term solution, if you cannot keep the cone on and she is licking at the incision, then you can fashion something for her to wear to cover the incision, such as a small t-shirt.

The other most important part after surgery such as this is keeping her confined to a small area. The less area she has to jump and run and rub against objects, the easier it is to control things like the cone.

When my cat had surgery last month, the vet sent him home in a loaner outfit that looked like a onesie made for cats. There are multiple manufacturers of these, but I found the exact one by searching online for "onesie for cat after surgery", and I ended up buying one to keep. There are also instructions online for a DIY onesie. 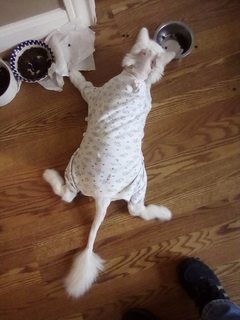 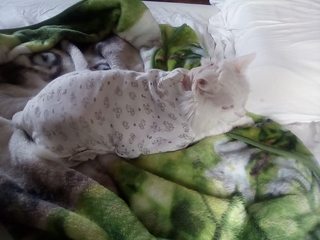 The benefits of the onesie are that:

The onesie I bought comes in multiple sizes (and for dogs, too), and has a snap-up undercarriage in case you need to open it for the cat to eliminate. My cat was able to do his business without needing the snaps undone.

The only downside of the onesie is that after about a week of wearing it, he got tired of it and started trying to chew it off, but it took a week for that to happen.

(Note for those who are non-AmE speakers and/or don't know anyone with a baby: "onesie" is pronounced like "WUN-zee" and is an article of clothing typically seen on a human infant.)

I had the same problem. We ended up using on of those leash harnesses that hook in around the chest in addition to around the neck, then threaded the neck part of the harness through the cone. That did the trick and she wasn't able to get it off anymore. Good luck!

12
How can I stop my cat from removing her cone?
1
Options for a wound other than a cone, collar or shirt

12
How can I stop my cat from removing her cone?
4
How can I get my unsocialized cat into the carrier to be spayed?
10
How do I give a cat *with a cone* liquid medication, by myself?
8
Cat is suddenly peeing everywhere
3
My cat is acting strange
3
My second cat doesn't know how to play with my other cat and thinks that she's being attacked
4
My cat has stopped eating wet foods