My goldfish's entire wen is gone, please help me!

So 2 days ago we cleaned the tank, all fish were fine. It took 24 hours for the water to clear up and all the fish were still fine, but I noticed a piece of fish poop stuck to the head of my baby oranda. It was definitely NOT an infection, it was just a floaty fish poop partially stuck on his wen and partially floating. I would have liked to remove it as it didn’t look very good but I’m not good with handling fish and figured it would just wash off on its own and went to bed.

But then, today I wake up and go to feed my fish but my baby's entire wen was gone! It literally looks like his head exploded! It’s not just a piece as I’ve seen in other injury cases, this fish's entire wen is gone! There are fleshy bits, I see blood and basically inside his head. I will attempt to add a picture. I have never had a sick fish, I have had sick sharks but that was some kind of parasite and we put medications in the water to save them. This time there was no infection or sickness, he was fine now his wen is just GONE.

I called the pet store but the guy was a jerk and told me it was not fish poop stuck to his head, but it was an infection - um, sorry, no - I saw the fish all day and every day leading up to this, he had no infection. He is my favourite fish at the moment - the poop had only just got stuck to his head, which is incredibly concerning.

I do have a pretty big gold fish in the tank with my smaller guys, some of the smaller ones were actually feeder fish my son won at a fair and out of 9 we were able to keep 5 alive.

I think my large goldfish thought the poop was a worm and but off my other fish' wen! It was literally dancing around his head like a worm would and we all know fish accidentally bite at poop thinking it’s food. The pet store guy said he didn’t believe me and that fish will attack sick fish, well yes I do believe that but my fish was NOT SICK! And they also will bite at a worm or fish poop!

Anyway, bottom line is I NEED help! How can I help this fish, he must be in so much pain (I’m actually crying) it’s so sad just to see him, I read that I need to make him a hospital tank and put iodine in the water. But I don’t know how much and I'm afraid to stress him further.

However I’m also afraid to keep him with the big one now as the fleshy bits are now floating around where his wen ripped off so I’m afraid the big fish might think it’s food again.

OK, I’m rambling, but please tell me if you have heard of this before. I have had orandas before but I have never had one with an injured wen. Any advice would be so greatly appreciated. I would even give him away if I knew someone else could give him better care, I love him so much. I’m afraid to give him to a pet shop though as they might just let him die. 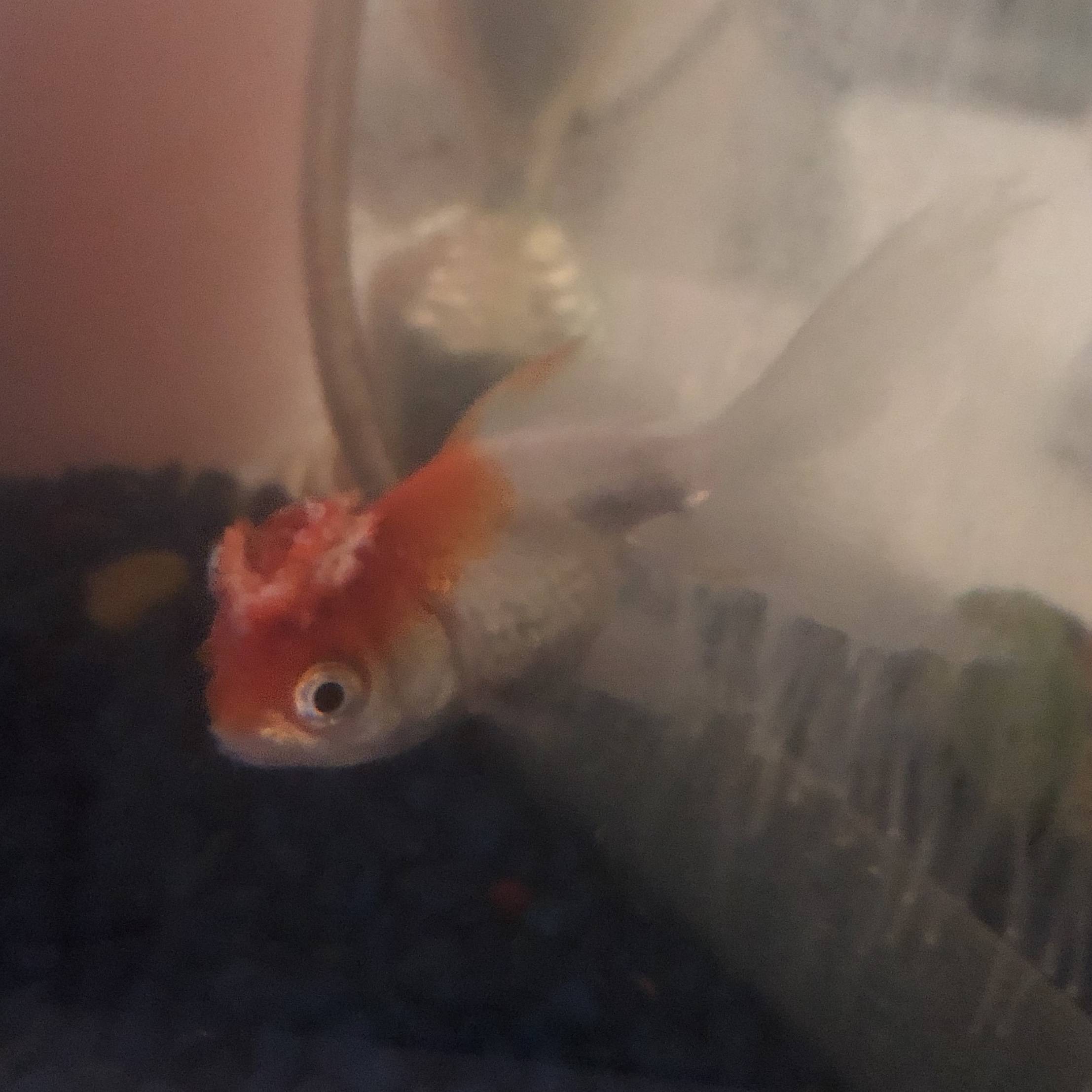 health diseases goldfish
Share
Improve this question
edited May 20 '20 at 14:42

Ok, breathe, it might be ok, they’re actually pretty hardy. Although it looks bad, it looks like "just a flesh wound" and all major organs should be intact.

First, if a vet is an option, make a phone call and see about getting the vet to the fish. It’s often not an option, though, especially for tiny fish.

Second, you want a clean, safe tank. The two biggest risk right now are infection and bullying. If you can’t have a hospital tank, the next best thing is an isolation box in your own tank.

See if you can get a "breeding box" to suspend in your tank, or get a floaty plastic box and put some holes in it. I have a "really useful box" with some holes drilled in it as my "easy isolation tank". Put the injured one in there away from any bullies (you might be able to use the box the catch him rather than net him, but minimise stress).

Check the water specs. They should all be good, and if not, take steps to improve them.

My preference would be to treat the tank with "Melafix" as my infection prevention of choice and save any special infection treatments for when infection actually shows up. Others on here or here might be able to advise on iodine.

Then let time heal that. Good luck! I’ve had a fish grow back a lot of fins after she was harassed by some males in the tank, so there is hope.

Not the answer you're looking for? Browse other questions tagged health diseases goldfish or ask your own question.

4
What is this tufty white spot on my goldfish's head?
2
Goldfish swim bladder disease? Please help
2
Wound on the head of my goldfish
5
Could having fallen onto the floor have changed my goldfish's behavior?
2
Why is my kitten’s tail tip like that?
10
How can I help my betta, who has a white-ish sore on his side, is laying at the bottom of the tank, and isn't eating?