Is this white spot on my Black Moor something I should be concerned about?

So I have 4 fish in my tank, and Gypsy is my little Black Moor. She has been quite timid at times in the tank with the others, staying in one area at times, but will come and eat when it’s feeding time with the others, or will explore where she fits.

On her left side I believe there is a little white blemish, but I don’t know if that’s her scale or if it’s something else. She doesn’t seem fazed by it but has me a bit worried. Her old tank mate (black moor named Kennith) wasn’t well a while ago; he had something quite similar to ich, but as he was so small it just took over him in a few days, and I don’t want the same thing happening here. But I’m not sure if it is me being paranoid as I removed her while he was being treated.

Just two days ago, I moved Gypsy into this new tank with her new mates and all seems well, bar this feeling I have about that blemish.

If you look at the photo below you can see a little bubble white blemish thing on her side. Might need to zoom in best photo I could get.

Any advice on what I should do?

Tank temperature is at 24.8 C - just over a 100 L tank with U2 filter and two air stone pumps and heater. Other fish mates are two other telescopes (Magma and Shark Bait) and a regular fancy goldfish (named Flash). 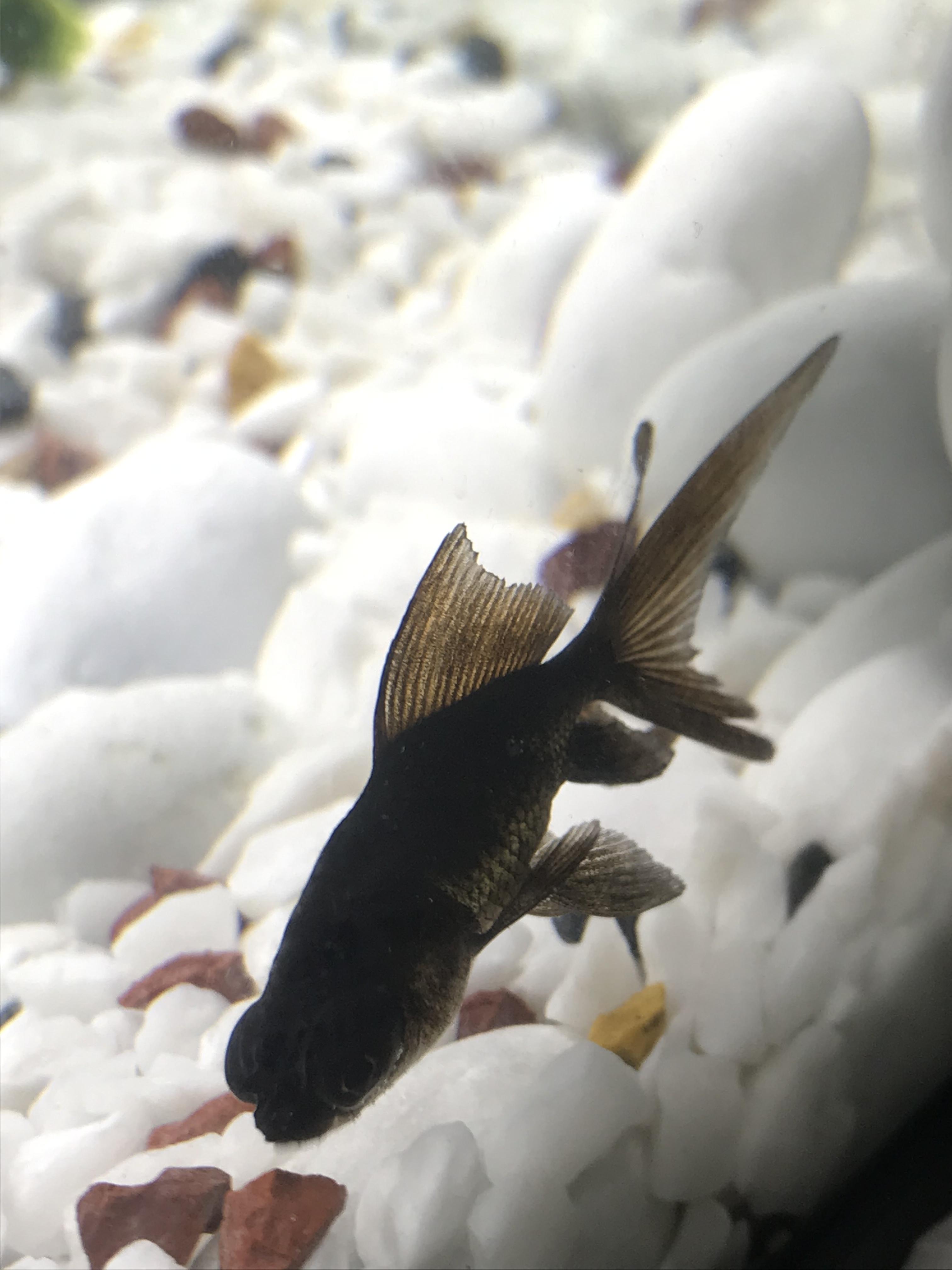 TL;DR: get the readings first and fix those if needed. If it is ich, treat the tank and quarantine inhabitants for a week (preferably a month) after treatment has ended.

Gotta confess, I can’t see the spot on the image, but I’ll tell you what I know. Meanwhile, see about getting the readings asked for in the comment above. Your local fish store might do it if you bring a sample of tank water, otherwise they’ll sell you the kits to do it yourself.

If you have three other healthy fish in a properly cycled tank, there’s a good chance your water quality is ok, but do check it. Certain things (like pH) can change slowly over time so the fish in the tank adapt but new fish cannot live there.

Ich (or "whitespot" as it’s known here) is a parasite with a lifecycle. It lives on the fish (and you can see it), then it drops off and lives in the water (leaving holes in the fish). Then it drops off and forms "pustules" on the ground (I’ve never seen these, just what I’ve read) which hatch and go back on the fish. You can’t kill it with the treatment unless it’s in the water (not the pustules), and that’s why some treatments say to dose on specific days. Whenever I’ve had ich, I’ve treated the whole tank, including all the older fish who, for some reason, seem immune to ich (just my observation). I’ve had instances where a new arrival gets ich and I’ve treated it and had no casualties or other instances of ich in the same tank. I’ve always quarantined for a month after treatment, and I’ve always assumed everyone was infectious even if they didn’t show symptoms.

What else could it be?

It might be a bit of "fish tank dust" caught in her body slime. Even if she is healthy, a few tank changes are stressful, so fish will be slimy. That catches little bits of gravel or sand or plant matter. You should see that ok.

If she’s a "he", and the white is on the gill covers or on the front of the pectoral fins, then that’s breeding tubercles. They get them in summer, usually. But you don’t get these on scales. And, frankly, your fish looks a little young for these yet.

I’ve seen fish get small white "wen" growths, but again not on scales.

It could be some other kind of parasite or fungus. A better picture would help there. But this covers just about all the others that might crop up.

Good luck, and if you find out what it was, you can pass on your knowledge with your own answer!

Not the answer you're looking for? Browse other questions tagged fish or ask your own question.

10
Should I be concerned about my egg bound betta?
3
What should I do about my betta fish sinking?
3
What is this white ball growing on my liferock?
2
Is the white spot disease from gold fish contagious for turtles?
4
What is this tufty white spot on my goldfish's head?
2
Antenna catfish with strange white spot and side fin
1
Black/white patches on betta
10
How can I help my betta, who has a white-ish sore on his side, is laying at the bottom of the tank, and isn't eating?