Why are some black dogs called blue?

I've noticed that in some cases when a dog is black, at least to my eyesight, they are described as being blue. Here is, I think, an example of this, in a Doberman: 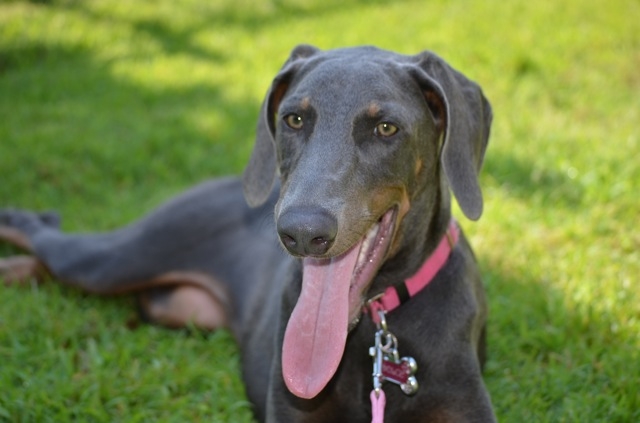 This photo on Wikipedia is captioned "Blue Doberman Pinscher".

I know you might say that the colors in the particular photo give the impression that it has a black coat as opposed to blue, but I recently saw the papers of one dog that had "blue and white" written for "color" when I could swear it was black. I stood there a while, closely looking at what was supposed to be its blue-colored hair/fur, looking at it from different angles to see if the light made a difference, and either I must be colorblind or it was black, not blue.

Does anyone know why seemingly black hair/fur on dogs is called blue?

Blue is actually a distinct color caused by the normal black pigment called eumelanin being muted by a distinct mutation or mutations near the melanophilin gene (MLPH). http://caninebreeds.bulldoginformation.com/blue-dogs.html. This results in a gray color that's distinct from other grays found in dogs. The blue color can vary from lighter to darker, or it can even be mottled, which is known as "blue merle."

I suspect that the reason you're having trouble discerning the difference is that color perception is actually a learned skill, and can be surprisingly subjective. For instance, some cultures cannot discern between as many colors as others, when there is no biological reason for this. A really good demonstration of this phenomenon is the internet meme of a few years ago, is it a gold and white dress or a black and blue dress? The meme was a photo of a dress, which due to the very particular light conditions, made people perceive the dress as very different colors, almost half and half thinking it was gold and white versus black and blue.

It may also be the case that you have trouble seeing the difference when the blue dog is on its own, but you could tell the difference if you saw another dog of the same breed but black instead of blue, standing next to it.

Not the answer you're looking for? Browse other questions tagged dogs biology or ask your own question.