How to remove a tick on a dog?

Since I have my dog I check him for ticks when we're back from walks in the backcountry. So today I noticed one, then after checking carefully another one. Hopefully there is no other.

So the question was: what should I do to remove it ?

I had to improvise a bit. I used tweezers, trying to get it as close to the skin as possible (to remove the whole beast). Is there a better way ?

Here is what I removed. 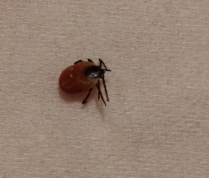 We have a lot of ticks in the South-West Finland and so I have been removing ticks from our dogs on regular basis every spring. We never seem to treat the dogs with tick repellent early enough.

To remove ticks I have used normal tweezers, special "tick-tweezers", bare fingernails and a tick lasso. So far the absolutely best device for removing ticks has been a tick lasso. I'm not affiliated with the company named in the picture, but for the old saying; a picture talks a thousand words. A tick lasso: 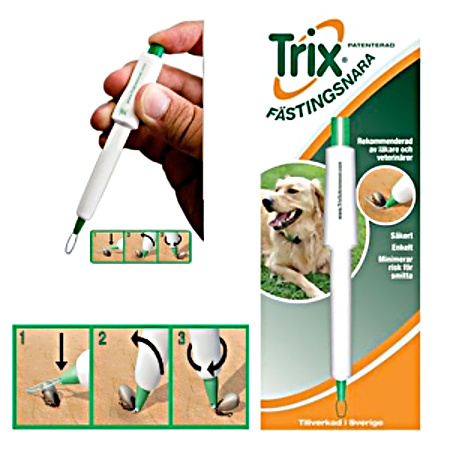 Using this device is easy, safe, almost 100% success, and you don't even need protective gloves in hand. Push the button on the other end of the "pen" and a lasso of a thin nylon string will come out from the other end. Ease the lasso over the tick so that it goes around the tick near the dog's skin. Release the button, which tightens the lasso, and raise the pen straight outwards from the skin, then rotate the "pen" while simultaneously pulling gently out. Tick comes out whole, usually still alive even. Drop the tick in a toilet and flush.

I have removed ticks from real tough places, like from the corner of a dog's eye, where you would not dare go with normal tweezers. I won't recommend anything but a lasso for removing ticks. 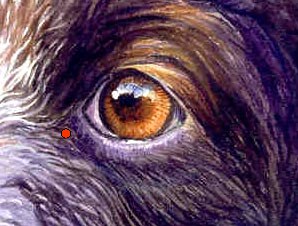 According the Blackwell's Five-Minute Veterinary Consult: Canine and Feline the process is to grasp the tick as close to the skin as possible with tweezers and gently pull free.

So, I would wear disposable gloves and using blunt-tipped tweezers (to protect the skin of the dog), gently grasp the tick body and gently pull in the opposite direction of the mandibles. Avoid crushing the body of the tick.

If the head of the tick breaks off and remains, don't panic, it will be ejected in a few days and it's very rare in any event. You should wash the area with a small amount of hydrogen peroxide (use a cotton swab) and then apply a little bit of neosporin. A small bump may remain, but it should disappear in a couple of days.

Keep an eye on your friend. As your follow up question asked, there's quite a lot of diseases associated with ticks, and so if you see anything out of place, get him to a vet ASAP.

Not the answer you're looking for? Browse other questions tagged dogs health parasites ticks or ask your own question.

1
How to remove a ticks on my dog?
-1
What is the most effective least toxic thing to kill dog ticks?
4
Puppy full of ticks
6
What are the effects of ticks on dogs and does it transmit diseases?
6
Correct use and efficiency of anti-ticks collars
3
Tick removal, to twist or not twist?

19
How can I get my dog to slow down when eating?
8
Dog has started to fear its own shadow
4
Foster dog suddenly violent
5
How can I remove multiple ticks from a dog quickly?
5
Can killing a rabbit trigger a behavior change in my dog?
4
Did I remove the tick the right way?
2
What is this wound on my dog's leg? Help me please
2
What kind of cat parasite is this worm?
3
I hurt my puppy, please help